Two petitions have been started calling for Maroon 5 and Manchester United to be banned in Singapore.

When were these petitions started?

Both petitions were put up on Change.org on March 9. 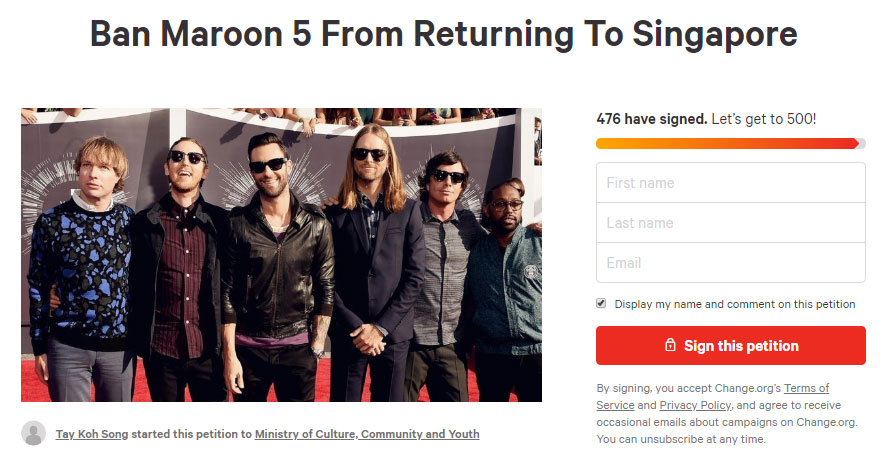 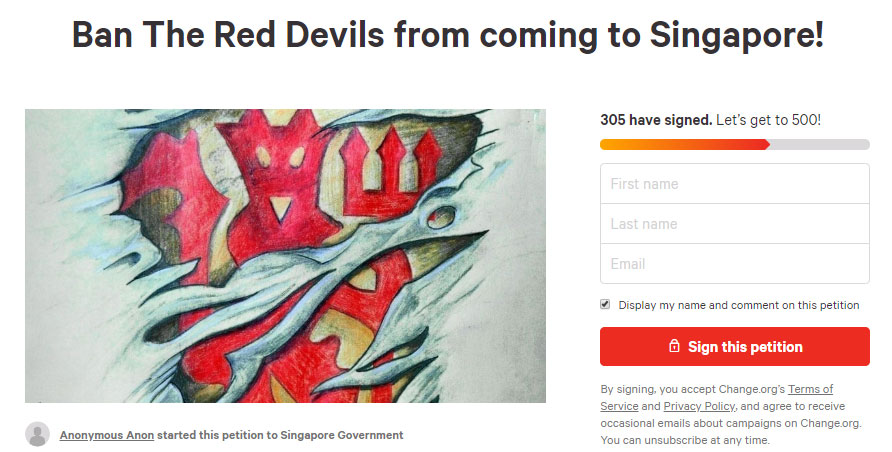 This was three days after a petition calling for Swedish metal band Watain to be banned in Singapore was put up on March 6.

Watain was scheduled to play in Singapore on March 7.

The metal band arrived here all ready to get their gig going, but was told the concert will be cancelled at the last minute.

What is the Maroon 5 petition about?

The Maroon 5 petition is asking for the band to be banned from entering Singapore the next time.

This is in light of the fact that Maroon 5 played a Singapore show at the National Stadium on the same day Watain was stopped from performing.

The petition linked the saccharine Maroon 5 pop band to the diabetes health problem that is increasing in prevalence in Singapore.

Maroon 5 has written a song called Sugar, which has the lyrics: "Sugar/ Yes please" and "Won't you come and put it down on me?".

What is the Manchester United petition about?

This is so as the football team calls itself "Red Devils", and the official logo features the unsubtle display of a devil holding on to a trident with mouth agape.

What did the Maroon 5 petition say?

One part of the petition said:

Their subliminal messages in their songs include lyrics like "sugar, yes please". This may compel young Singaporeans to consume more sugar in their diet, which increases the risk of diabetes.

The sticky nature of the song is reminiscent of Pour Some Sugar On Me, by Def Leppard, released in 1987 -- a period of time when the diabetes pandemic was not full-blown yet, but has been on the airwaves the past 32 years.

The petition is started by one person called Tay Koh Song, which sounds suspiciously like "Tea without sugar" in Hokkien.

What did the Manchester United petition say?

Obviously with an intent to spread their influence in Asia with Singapore as a platform, this group called The Red Devils from Manchester is not welcomed. We shudder to imagine the kind of negativity they bring with them.

Manchester United is slated to come to Singapore in July 2019 for the International Champions Cup (ICC).

How serious is the Maroon 5 petition?

Type 2 diabetes, the most common type of diabetes that can be prevented, is almost expected to explode in numbers in Singapore.

The Singapore government has officially launched a War on Diabetes.

About 400,000 Singaporeans are diabetic and one in three has a lifetime risk of developing the disease.

Singapore is second only to the United States in having the highest incidence of diabetes among developed nations.

Plus, Asians are more prone to Type 2 diabetes than their Western counterparts. Why?

Because Asian bodies often do not produce enough insulin, causing sugar to build up in the bloodstream and a host of accompanying health issues.

Moreover, food lobbyists have for the past few decades obscured the role of sugar in contributing to obesity by pointing the finger at fat.

It is no wonder that sugar has been alternatively referred to as the "Devil's dust".

How serious is the Manchester United petition?

Subtlety has always been the forte of the Devil.

The Devil can show up as a benefactor, only to rob you blind.

So, what if the Devil was being blatant, such as showing up in red with a trident emblazoned onto every single Manchester United home and away kit since it was adopted in the early 1960s?

One will always be tempted to write it off as just a childish representation with no deeper meaning.

However, one has to be aware of the trickery of the fallen one, by calling attention to the Devil's scheming nature via this quote:

"The greatest trick the Devil ever pulled was convincing the world he didn't exist." -- The Usual Suspects (1995)

What have people who signed the Maroon 5 petition said?

What have people who signed the Manchester United petition said?

How should I approach these two petitions?

The consequence of signing one is that your signature will be included with those who do feel strongly about something, as well as those who have little to no conviction, but want to join in anyway.

Some people sign petitions ironically, while others sign it and ask others to do so to astroturf.

Previously on things getting banned in Singapore: