Cathay Organisation has issued a statement in support of Pink Dot.

This was after a Pink Dot ad featured on an escalator in Cineleisure mall in Orchard sparked calls to report the matter to the police.

The group calling for police involvement is an anti-Pink Dot group on Facebook, We Are Against Pinkdot.

A Cathay spokesperson told Marketing that Cathay is an entertainment company that has always believed in an all-inclusive society where there is a place for everyone to call home:

“This is and has always been in line with our mission of bringing people together. We hope to inspire people to embrace the values of equality where one can live and love freely.”

Prior to this year's ban on foreign involvement in the Pink Dot event, Cathay was already a corporate sponsor. The banner escalator advertisement in Cineleisure this year is considered advertising within private property premises.

The application was made despite advertisements being self-regulated in Singapore.

According to the Singapore Code of Advertising Practice [page 8 of PDF], all advertisements “shall not subvert the shared values in Singapore’s society”.

These values include, nation before community and society above self, family as the basic unit of society, community support and respect for the individual, consensus, not conflict, and racial and religious harmony.

News of the anti-Pink Dot Facebook group's antics being reported in the media has triggered at least one of its members: 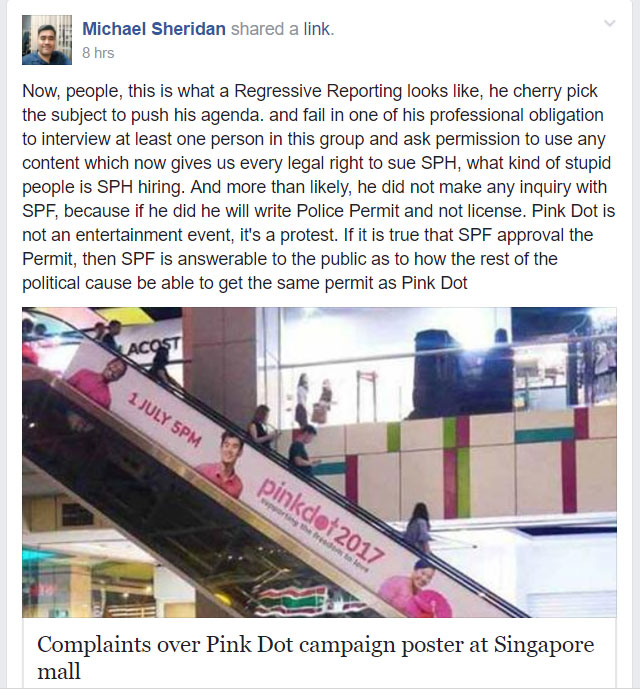