On Dec. 27, the Ministry of Health (MOH) added two locations to its list of places visited by Covid-19 cases while infectious — a Bukit Batok eatery, Cuppafield, and the Haidilao outlet at IMM shopping centre in Jurong.

MOH has repeatedly said that there is no need to avoid the listed places, which would have been sterilised and pose little risk of infection.

This group of people are advised to monitor themselves for symptoms.

However, the addition of two new places on the list has attracted some scrutiny.

Most recent community case was on Dec. 21

This is so as the last time Singapore had a new community case was on Dec. 21, before one other case was confirmed on Dec. 28.

Since all of the cases from Dec. 22 to Dec. 27 had been classified as "imported cases" by MOH, how could there be Covid-19 cases spending nearly three hours at a popular hotpot joint in a crowded shopping mall on Christmas Eve?

It appears likely that one or more of these cases were the visitors to the two new locations while infectious.

How did visit to public places while infectious happen?

The three cases were moved out of Mandarin Orchard Singapore hotel on Dec. 20, a day after MOH commenced investigations into a "potential link" between the 13 cases who stayed at the hotel between Oct. 22 and Nov. 11.

A few days later, their Stay-Home Notices (SHNs) all came to an end on Christmas Eve, the date when the two locations were visited just after noon, and in the evening respectively.

Here's what else we know about the three cases: 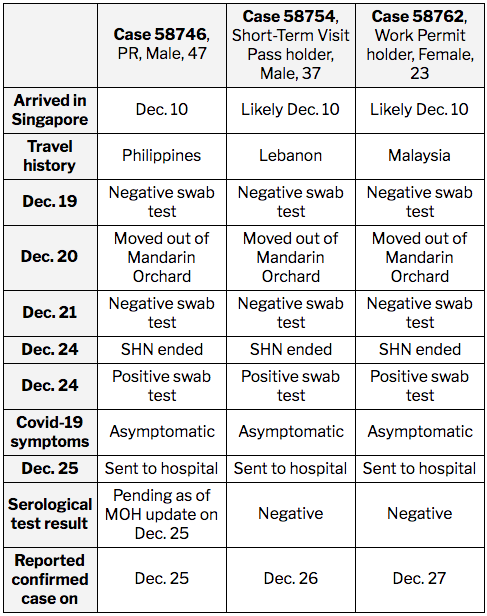 His test result came back positive that night and he was conveyed to the hospital the next day.

It is not known if he remained at home prior to receiving the positive test result.

Was Case 58746 allowed to leave the SHN venue before the test results out?

For Case 58746, MOH said he was swabbed upon completion of SHN on Dec. 24 as a "precautionary measure", and went home.

It is to be expected that visitors to Singapore should be swabbed at the end of their SHN.

However, Case 58746's Dec. 24 swab could be considered by MOH to be a "precautionary measure" given that he had tested negative twice on Dec. 19 and 21, and did not display any Covid-19 symptoms.

The same could fairly be assumed for Cases 58754 and 58762, who also tested negative twice prior to the end of their SHN, even though it was not stated in MOH's updates whether these two cases returned home after being swabbed on Dec. 24.

Assuming the three cases' SHNs came to an end at the same time of the day — presumably 12pm — it could have been any or all of them who visited the two new locations.

We also know that Case 58762 has gone through additional tests after her positive result from the Dec. 24 swab.

A confirmatory test by the National Public Health Laboratory (NPHL) was also positive.

There are some key differences between the two cases.

Why is MOH investigating a link between the 13 and the three cases?

MOH said a "potential link" between the previous 13 cases who stayed at the hotel between Oct. 22 and Nov. 11 is likely due to the infections having a "high genetic similarity".

However, there is a significant time gap between this batch of three cases and the previous 13 cases, who stayed at the hotel between Oct. 22 and Nov. 11.

The three latest cases are likely to have arrived in Singapore on Dec. 10.

Getting Covid-19 via hotel?

Even if they occupied the same rooms or used the same facilities or equipment in the hotel, the likelihood of infection after nearly a month is extremely remote, given that the virus survives for eight days on salmon at 4°C.

However, MOH said that genome sequencing for cases who stayed at the Mandarin Orchard beyond Nov. 11 is still continuing, as of Dec. 19.

The analysis takes around four weeks to complete.

But as more details emerge, it is likely that more cases that stayed at the Mandarin Orchard could possibly be connected to both the previous 13 cases and the current three cases as well.

In other words, there could be an intermediate group of SHN cases who caught the infection from the 13 and passed it on to others on SHN, eventually infecting the three cases.

Ruling out hotel staff as the link

Given that none of the more than 500 hotel staff have tested positive for Covid-19, with the exception of 11 staff, whose test results indicated past infection, hotel staff being the link can probably be ruled out.

Mothership has reached out to MOH for further information on the cases linked to Mandarin Orchard.

Photo by Hadiliao on hungrygowhere and by Martino Tan