A Korean woman living in Singapore has gone onto Facebook with lavish praise for Prime Minister Lee Hsien Loong.

The post — which has gone viral with over 10,000 shares and 17,000 likes — was written by Facebook user Gwen Myung and waxed lyrical about the relationship between PM Lee and Singaporeans.

"Hero of the nation"

"I have never seen a political leader being so much respected and supported by their own people," wrote Myung.

"Yes, Singapore is a FINE(Penalty) Country. But you will be surprised how much faith people have in Government and leadership."

While Myung wrote about her own sadness at the death of PM Lee's father Lee Kuan Yew, she opined that the younger Lee was "more open and down to earth".

Specifically, she pointed out PM Lee's accessibility to Singaporeans, and how he ensured his messages were communicated and his citizens protected.

"Not only his personality is charming and friendly," she wrote.

"He puts his heart and soul into running this country and Singaporeans are aware of that."

According to Myung, the strong relationship that PM Lee cultivated with Singaporeans has led to the country's relative stability throughout the Covid-19 pandemic.

"People feel safe in Singapore. People feel that Singapore is one of the most safest places in the world."

Some were even calling PM Lee a "hero of the nation", she wrote.

The life coach and counsellor then shared her conviction that Singapore would get through the pandemic without "too much of damage" while encouraging her readers to "follow the guidelines".

Myung's post was met with almost universal agreement and gratitude: 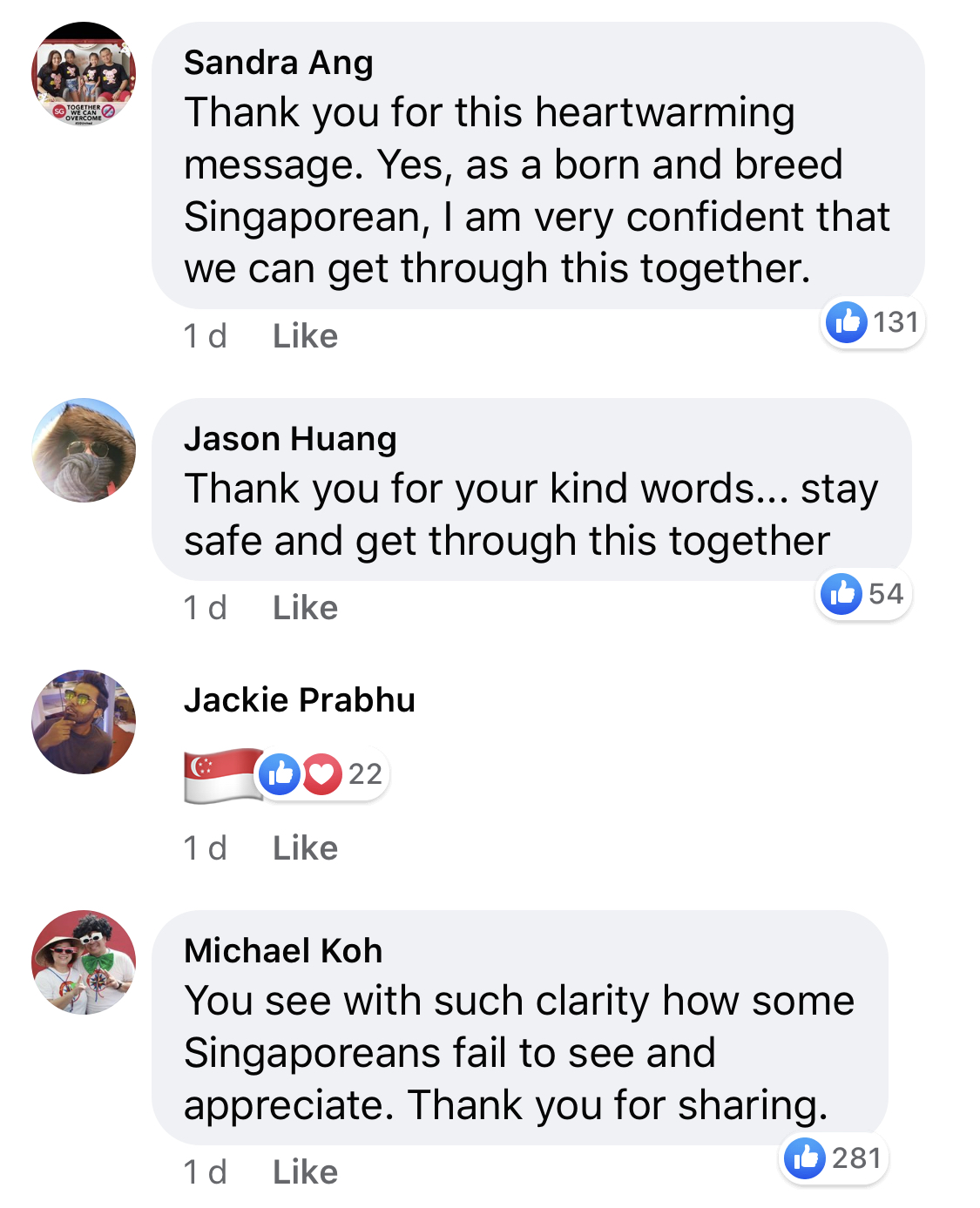 A foreigner even seemed to express his wish that his country would be more like Singapore:

However, at least one person was less than impressed:

This man is Singapore Prime Minister Lee Hsien Loong, Son of Lee Kuan Yew. I have never seen a political leader being so much respected and supported by their own people. Yes, Singapore is a FINE(Penalty) Country. But you will be surprised how much faith people have in Government and leadership. When Prime minister addresses important issues, I often see responses like "Please do NOT worry Prime Minister. We will get through this together." This is a rare scenery to see people comforting their leader, NOT the other way around.

I still remember back in 2015 when his father Lee Kuan Yew passed away, how thousands of people mourned over his death. The sense of sadness was so deep, you could feel it in every corner of Singapore street. I am a Korean but I too was deeply saddened by people's emotion at that time.

Lee Hsien Loong is different from his father. While Lee Kuan Yew was criticized for being too restrictive, Lee Hsien Loong is more open and down to earth. He makes sure that messages are communicated with citizens. He makes sure that his people are protected and provided. And he doesn’t hesitate to make himself available to fellow Singaporeans and enjoys mingling with crowd like a child.

Not only his personality is charming and friendly, he puts his heart and soul into running this country and Singaporeans are aware of that. Many Singaporeans are comfortable about his political decisions. It seems this strong relationship and loyalty between citizens and political leader makes the country as a whole incredibly strong especially in chaotic times like now. People feel safe in Singapore. People feel that Singapore is one of the most safest places in the world. I have seen people calling him a Hero of the nation. And this does NOT come without an effort.

I have every confidence that Singapore will get over this pandemic without too much of damage. Continue to have faith and follow the guidelines. Let's get over this together as one. SG United!!

(I sound like a Singaporean.. lol. I am just a Korean living in Singapore. But let's beat this together anyways!!)

📅💻
A list of online events to brighten up your stay home situation.

🌳🔥
What has Singapore done for climate change?

✈📷
Know someone who owns a drone?

🏪🍱
A lazy person's guide to convenient lunches when you're working from home.

🖥️🏠
We hate online meetings as much as you do.