A Singaporean man has started a petition calling for cars to be banned from Singapore roads for six months.

The bizarre drastic measure petition was started by Kelvin Ho, on Dec. 31, 2019.

It was created in response to the tragic Dec. 29 Lucky Plaza accident that saw two fatalities and four people injured. 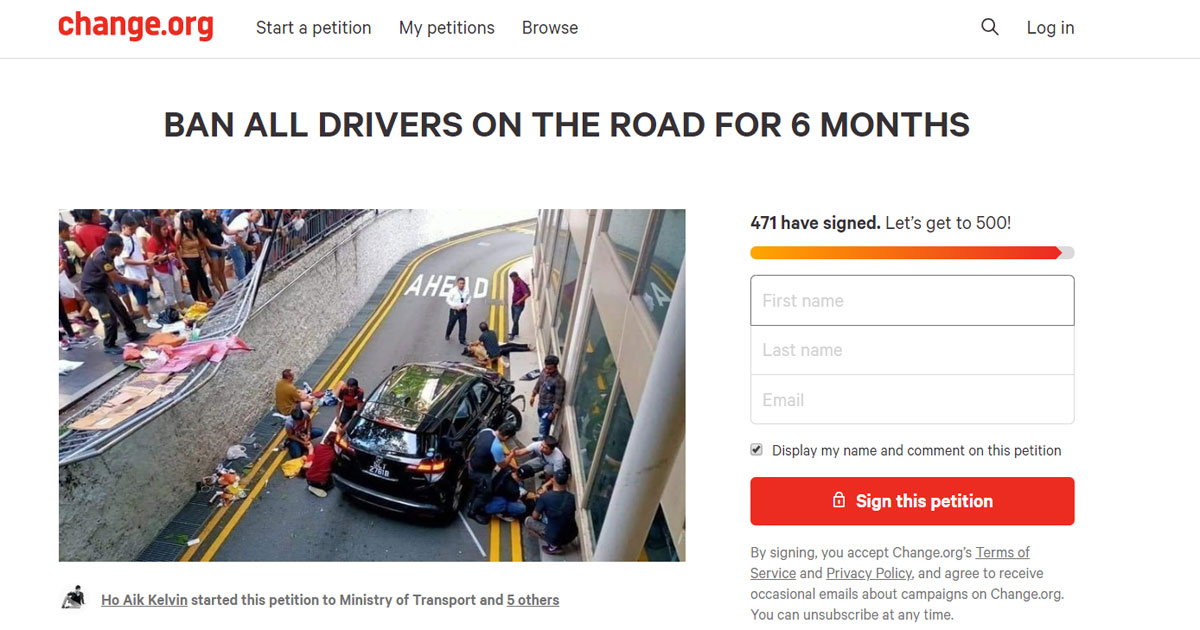 What petition advocating for?

Ho wrote in a rambling introduction to the petition that cars ought to be banned as they caused deaths.

This rationale of imposing a ban following a death, he wrote, should be applied to cars.

Previously, e-scooters were banned from footpaths in Singapore from November 2019, as a result of accidental deaths caused by errant users of these devices.

The petition has received some 447 signatures and counting within one day.

Ho also put up a 10-minute video on Dec. 30 to accompany the petition.

The caption accompanying the video said:

Ban all motorist from driving on the road for 6 months. A wake up call is needed. If not all our love ones will be in danger every moment they steps out on the road! Reckless drivers aren't improving at all despite they called themselves they are licensed certified drivers!

Let's bring back the to the days without #pmds on footpaths.

Let's also bring back to the days without road users on the road for 6 months.

Don't say. Prove to us. Like how you did to decent #pmds riders.

Wake up call to everyone. Protect our love ones outside.

This petition by Ho is likely to be viewed as opportunistic, frivolous, and created in poor taste.

The tragic accident that claimed two lives has sent shock waves throughout Singapore and the foreign domestic workers community, which is sufficiently closed-knit.

An indication of how affected people are by this accident can be gleaned from the outpouring of donations via a charity fund set up for the six victims, all women, involved in the accident.

The S$100,000 target was initially breached within one day.

The ill-timed petition might further polarise the e-scooter ban debate in Singapore.

Currently, public consensus appears to be against e-scooters being used on footpaths.

This assessment is based on the aftermath of an enforcement officer being widely applauded by a sizeable group of people in Singapore for kicking an errant e-scooter rider off his device along Bedok Reservoir Road.

Such negative sentiments might also stigmatise the broader personal mobility device users in Singapore, such as e-unicycle users, as they are viewed as recalcitrant.

From Jan. 1, 2020, the Land Transport Authority (LTA) has said it will be taking a zero-tolerance approach against e-scooter riders caught on Singapore footpaths.

One of Ho's previous videos was relatively well-received.

In a Nov. 4, 2019, highly-emotional 10-minute video, he spoke out against the e-scooter ban when it was first initiated.

That clip, which featured Ho's improvised soliloquy to the camera, was viewed with sympathy by the public, even though it was punctuated with many nonsensical phrases used to berate the authorities in Singapore.

The video was viewed some 302,000 times, which attests to the popularity of the video's subject, and/ or its candid, heart-on-sleeve delivery.