Durian Whisky was launched in Singapore at the Yummy Food Expo on June 27.

And it most likely riled whisky aficionados here due to it taking liberties with the whisky label.

But it turns out, the beverage is not really whisky.

The Singapore court has since acted and issued the company a S$2,000 fine on Dec. 4 for false labelling.

According to The New Paper, the company behind the drink marketed the beverage as The Durian Whisky.

But this name has been judged to be false labelling.

The Singapore Food Agency (SFA) received feedback regarding the drink in July, which was just after its launch.

The drink is sold by Durianwhisky at the Central Perk cafe at Magazine Road.

The drink was listed for sale on the Durianwhisky website at S$198 for a 700ml bottle.

The listing now said it is out of stock. 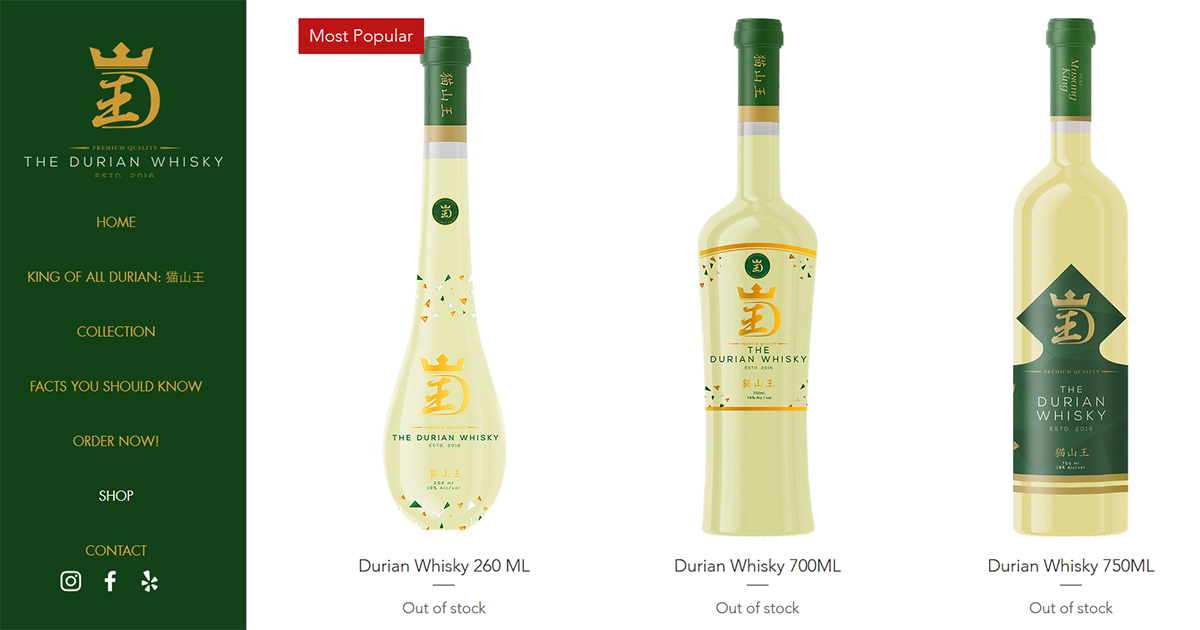 When the drink was launched, it was said to be created by Malaysian company Tropical Wine Sdn Bhd.

The main problem with Durian Whisky was highlighted the moment it was sold.

While the maker claims Durian Whisky is "skilfully brewed from 100 percent pure, delicious flesh of the Musang King durian", it was reviewed by tasters to be not a whisky but more a liqueur.

A lower alcohol content notwithstanding, it has sugar and flavour added, and involves a “pressing” process that is used to manufacture wine.

Tastes-wise, it is described to be more like alcoholic cream.

The alcohol by volume (ABV) level of Durian Whisky is lower than the minimum ABV level of whisky stated by Singapore law.

In Singapore, a whisky is defined as a product that contains an ABV level of not less than 37 percent at 20°C.

Durian Whisky has an ABV level of only 18 percent.

Moreover, the conventional definition of whisky is a product that has to be distilled from grain products, including barley, corn, grain, rye or wheat, and aged in oak barrels for some time.

Durian Whisky was priced at about S$100 for the smallest 260 ml bottle.

Durian alcohol is apparently quite popular: