The bustling Singapore River is featured heavily in our Singapore story, and even features in the lyrics of the highly popular National Day song, Home, whose chorus goes:

"This is home truly

Where I know I must be

Where my dreams wait for me

Where that river always flows"

So, everyone knows the Singapore River, but do you know its source?

According to Infopedia, much of the areas upstream of the Singapore River were swampy land, flooded occasionally by the tides before the turn of the 19th century.

Officially, the "present demarcated start of the Singapore River" is actually the Kim Seng Bridge.

However, the river itself actually extends beyond the bridge.

So, where does it actually start from?

Beyond Kim Seng Bridge (towards Zion Road), the River is fed by Alexandra Canal.

Presently, there are multiple water sources (from various streams, drains, underground canals, etc) that feed into the Alexandra Canal, and subsequently flows into the Singapore River.

What's interesting to note is that Alexandra Canal was previously a stream before it was converted into a canal.

It was a curious stream which fed water into both the Singapore River and Sungei Pandan. The locals even had a name for this special river with no apparent source -- boh beh kang 无尾江 (No Tail River in Hokkien).

Original source of the Singapore River

This missing source of Alexandra stream seems to be the original source of the Singapore River, and Infopedia pins it at the "area between the present Sungei Ulu Pandan Canal system and the Alexandra Canal system". 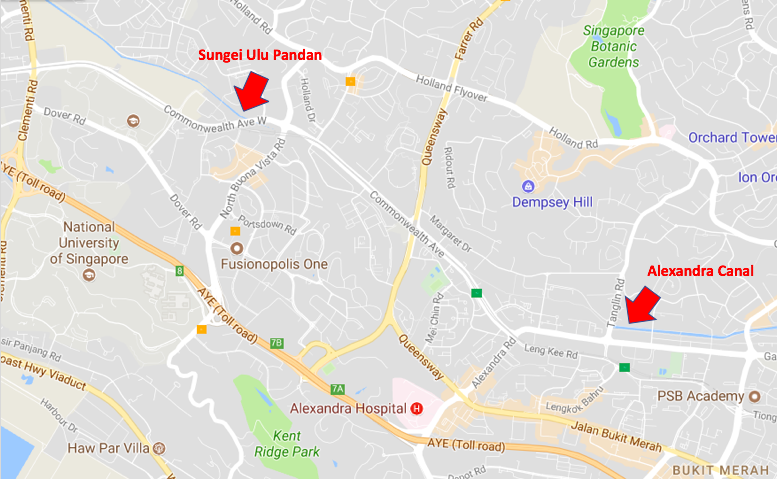 Using the One Historical Map, we are able to trace the source of Alexandra Canal using a past map, and locate it in the present day.

We found that the Alexandra stream actually begins from the Tanglin Halt and Commonwealth Avenue area.

The Sungei Ulu Pandan Canal system is only one cross junction away from this location, which ties in with the fact Alexandra stream feeds water to both the Singapore River and Sungei Pandan. So, in all likelihood, this humble drain along Tanglin Halt Road was the original source of Alexandra stream and the Singapore River.

Here's another view of the drain and its surrounding area, with Tanglin Halt estate in the background. The Singapore River technically has lost its mouth today, since it was dammed up by Marina Barrage in 2008. This means that the river's water no longer merges with the sea.

Remember, if you drink water think of its source. In this case, it's in the Tanglin Halt area.

Apparently, there’s a headless ghost that will deliver booze to you this Halloween