How many times has your old man forwarded a badly-typed message in the family WhatsApp chat group warning you about some incredulous thing like the Government is spying on your bowel movements?

Or worse. You forwarded such messages.

Congrats, you are probably one of those who contributed to these 5 times Singaporeans spread panic for nothing:

The one time Singapore had a bear on the loose 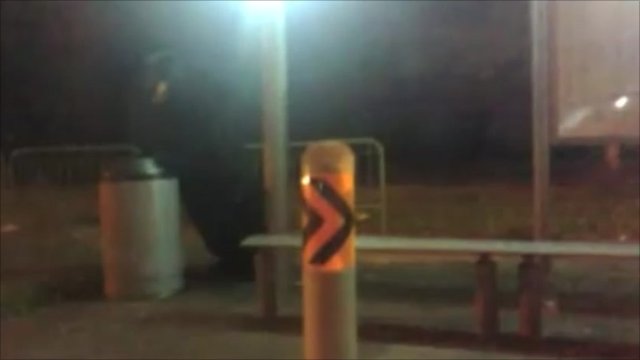 Shaky and grainy footage of a supposed ‘bear’ at an ulu bus stop spread online like wildfire in 2010. It turned out to be an advertising stunt for a shaver.

The video even sparked a search by the Singapore Zoo with tranquiliser guns. Turns out, the ‘bear’ was just a man in a bear costume.

The one time Bugis had a terrorist threat

This was in 2009 when social media was not as prevalent as it is today. A badly-typed out SMS made its rounds and some people obviously believed it enough to forward it.

Here’s what it said:

“Kindly spread e news 2 yr friends. If possible, do not go Bugis these few days. Terrorists may plant bomb ard that area. This msg was forwarded from my friend’s army friend. Who said they’re alrd on 24hrs standby. Not sure how true but a friend was at Bugis today & there were really many policemen. i just wanted 2 be safe than sorry.”

A 19-year-old teen was arrested in connection to this.

The one time people could not talk bad about the Government

Here’s a WhatsApp hoax that happened just this year. It warned people that writing or forwarding any content related to politics or religious debates would lead to an arrest.

“Don't forward any posts or videos etc., u receive regarding politics/present situation about Government/PM etc.

Police have put out a notification termed ..Cyber Crime ... and action will be taken...just delete...inform your friends & others too.

Writing or forwarding any msg on any political & religious debate is an offence now....arrest without warrant...

This is very serious, plz let it be known to all our groups and individual members as group admin can b in deep trouble. Please take note of this seriously.”

Funny how the people spreading the message didn’t stop to think that if forwarding political messages would get the forwarder arrested, they would’ve been arrested for precisely the same thing when they spread this message.

If this were true, Mothership.sg would already be in jail.

The one time we were all eating plastic rice 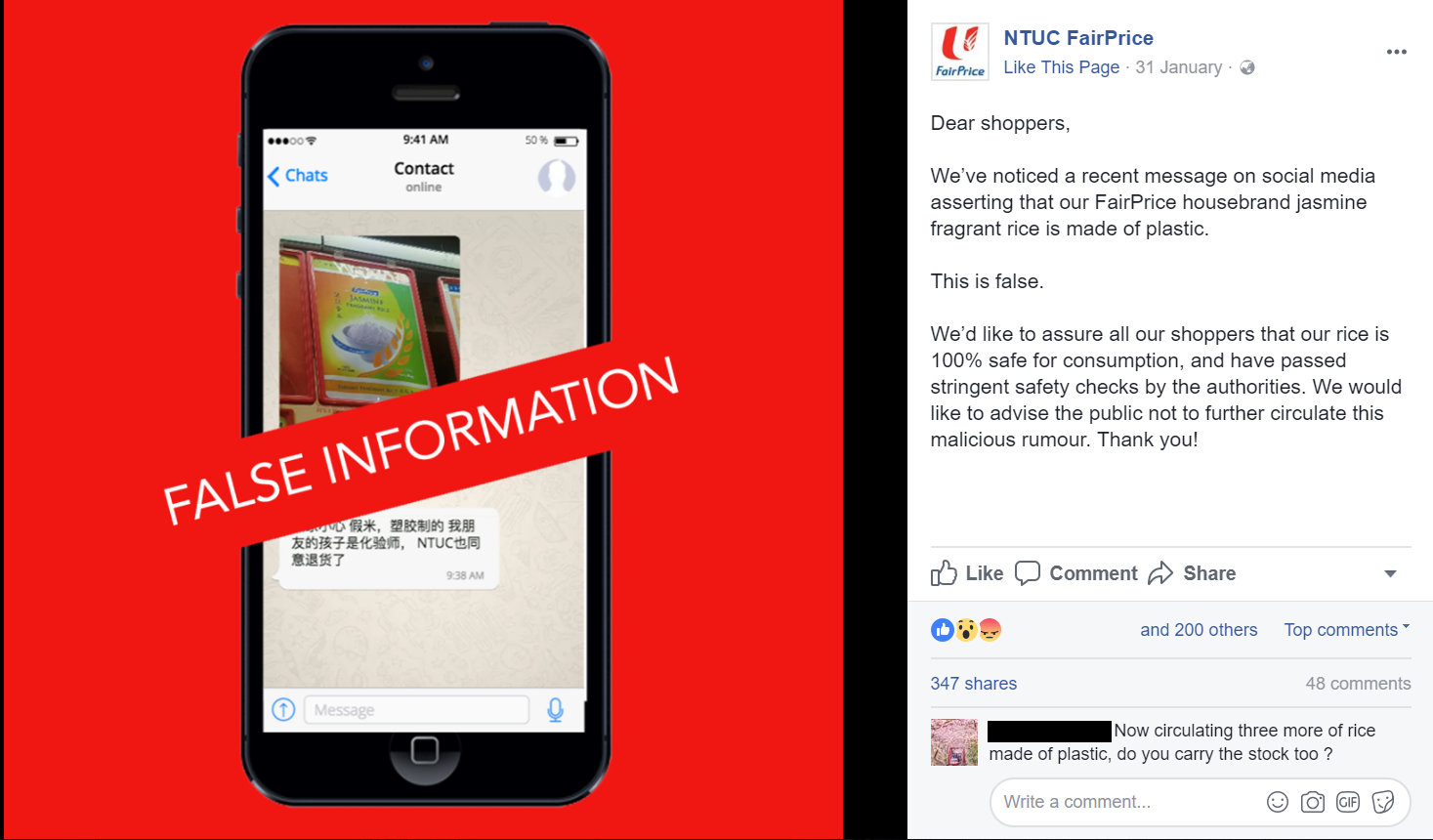 It’s no fun when hoaxes have you questioning the safety of the food you’re putting into you and your family’s bellies.

Rather than believe a hoax message like this, why not actually go check the rice you just cooked? Plastic tastes quite different from rice, no?

The one time Singapore was overrun with child kidnappers 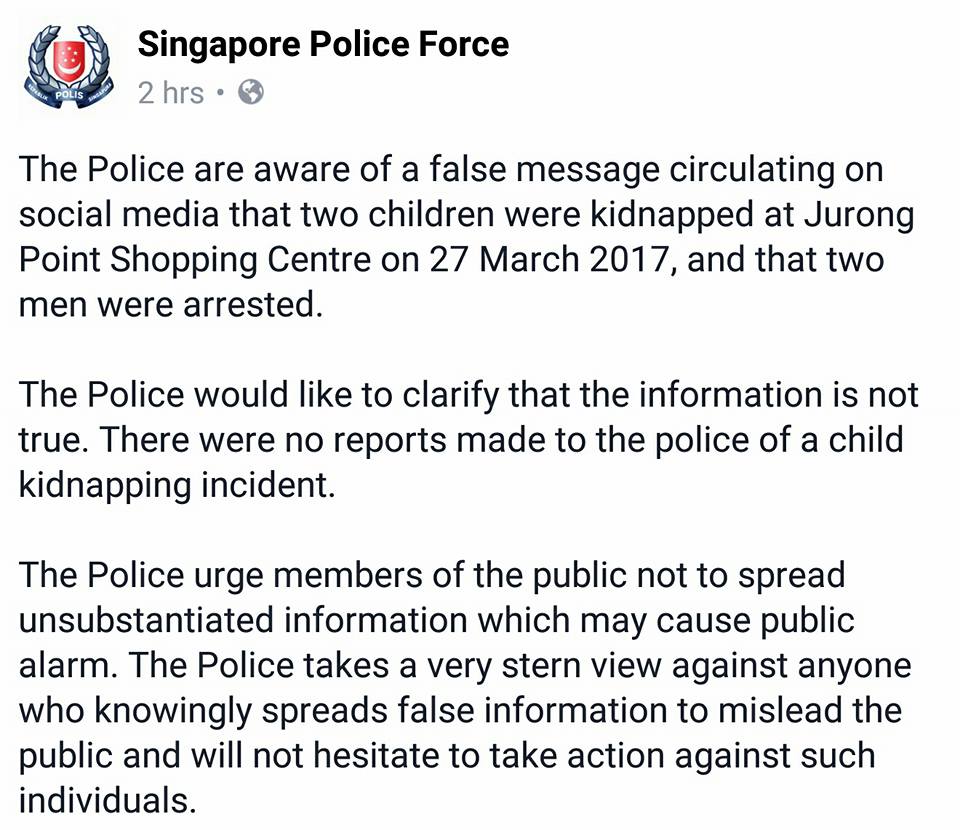 Jumpy parents do not mix well with social media. There have been several Facebook posts in the last two years singling out supposed ‘perpetrators’ of a particular nationality.

Please stop. When you receive such messages or social media posts, the first thing you should do is not panic -- no one is coming to kidnap your kid or replace your rice with plastic bits.

Next you must resist the urge to forward the message to everyone. I know, I know, it’s tempting to one-up your Father in sending totally dubious WhatsApp messages in the family chat. But try not to outrank your Father in sharing such messages, ok?

Lastly, you should check relevant sources to ensure what you receive is genuine. No, your relatives would not be able to confirm whether terrorists are intending to blow up something in the next 72 hours. They are your relatives, not the CIA.

A good starting point when you receive a so-called imminent terrorist threat is to check the SGSecure app or Singapore Police Force Facebook page and website for updates.

Now go forth and live your life with less fear caused by hoaxes and badly-crafted WhatsApp rumour messages.

This post is sponsored by SGSecure who just want you to not spread unnecessary panic and trust the information from official sources, not the aunty at the market downstairs.