The wife of the newly famous Singapore busker and singer Jeff Ng has spoken up.

Wife stepped in to defend

This comes after the busker's former flame, Lena Ng, took to social media -- which you can read all about here -- detailing the alleged abuse she had endured during their three-year relationship.

Jeff responded on Jul. 1 and issued a public apology to Lena and to his fans and followers on his Facebook and Instagram.

Jeff's wife, Zona Tay, stepped up to her husband's defence a few hours later in the comments section of Ng's Facebook apology.

Tay asserted that she was the best person to speak for Jeff's character as she is married to him and lives with him.

Responding to Lena's claim that Jeff was mistreating her, Tay denied this and claimed that her husband treats her well contrary to the opinions of others.

Tay added that Jeff is caring towards her.

For instance, he would check in with her constantly when she was juggling between the hectic schedule of school and work despite having to lose some sleep in the process.

"When work gets tough for me, Jeff never fails to remind me to rest, take time for myself and unwind with my friends," said Tay.

Jeff is also respectful and filial, according to her, and he would carve time out of his busy schedule to spend time with his in-laws.

"My pillar of strength and support"

Tay said Jeff is an "awesome husband" in their one-plus year of marriage and he is her "pillar of strength and support".

"In times of need, I know I can always depend on Jeff for he is always just one call away."

"Proud of the man he is today"

Tay said she felt blessed and fortunate to be married to him and that their marriage was overall a happy one, despite having their own ups and downs.

Jeff has since turned over a new leaf and is now a "changed man", Tay said, and she is proud of the man he is today.

You can read Tay's full statement below:

Dear everyone, my name is Zona, and I am the wife of Jeff Ng.

It has come to my attention that a previous partner of my husband has shared about their past relationship publicly.

There’s no better person to shed light on the matters going on than myself since I live with Jeff 24/7 and can attest to his behaviour. Jeff is a responsible person, and he respects, treats me well unlike what others are saying.

As per every relationship, there are ups and downs but overall Jeff and I have been happily married for a year and I feel blessed as well as fortunate to be married to Jeff, and I am proud of the man he is today.

When work gets tough for me, Jeff never fails to remind me to rest, take time for myself and unwind with my friends. When I was juggling school and work, he’d constantly check on my well-being and support me even if it meant sacrificing his sleep.

He is also an extremely filial son-in-law, who makes effort to spend time with my parents weekly despite his busy schedule.

In times of need, I know I can always depend on Jeff for he is always just one call away. He is my pillar of strength and support.

I hope this sheds some light from my perspective – Jeff is a changed man and he’s an awesome husband. 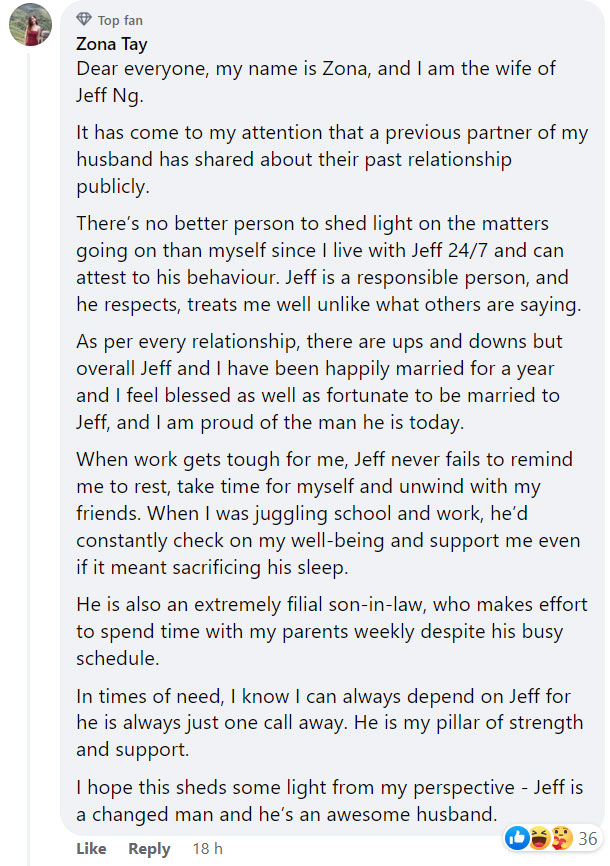