Thousands of people turned up at Marina Bay Sands (MBS) and ION Orchard on Saturday, March 26 morning to get their hands on the new Omega x Swatch collaboration.

And boy, were they angry when they couldn't buy one -- and when it wasn't even limited edition.

Despite countless of videos of the chaos that ensued showing the hordes of people descending upon MBS and ION, a fresh video circulating on TikTok showed the extent of the unhappiness on the ground that day.

A Swatch brand manager who had spent more than 7 minutes speaking to a group of disgruntled and empty-handed customers walked away while escorted by police for his security, and said: "I'm done."

Here's a summary of what was said in the video.

The Swatch manager apologised to those present for not having enough stock to "satisfy" everyone.

He then reminded those present that the watches are not limited edition, which led to several of the customers to demand a solution and for him to explain why they were brought down to the holding area.

The manager then asked the customers not to shout and said the overwhelming demand was not expected.

He then asked the customers to leave because Swatch "really" did not have enough stock for everyone.

This led to more grumbling.

Why keep customers in holding area?

One male customer then asked for a "convincing reason" as to why they were kept in the holding area from 7am to 10:30am.

The camera then panned to the right, which showed several police officers and other personnel standing at the side.

So done at 1-minute mark

The brand manager could be seen doing a right foot tap -- the first sign he was already so done in the first minute of addressing the disgruntled customers.

One female customer then highlighted that if Swatch knew it had 100 watches, it should have stopped the queue after 100 people showed up.

Another customer then insisted that Swatch should take down the particulars of the people present and fulfil their orders since stock is not limited.

Another then said the mall's management should reimburse the parking fees of those who queued overnight. 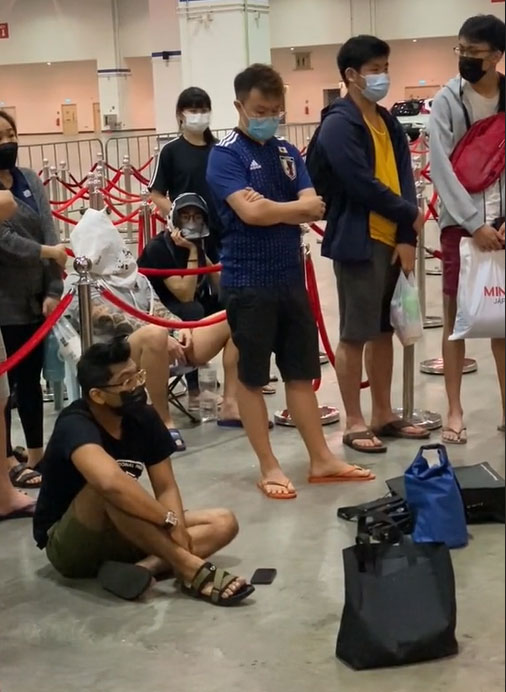 One customer then said the people at the holding area should be given priority to choose the watch designs they want, as those granted entry into the shop would have bought the watches with nicer designs.

One of the customers said they are just asking for "service recovery".

This was because Swatch had used the customers who queued overnight as marketing buzz.

The manager said in response that Swatch cannot entertain certain requests, as Swatch always operated under a no reservation policy, and that is under the purview of the top management.

He also reiterated that this was not the situation Swatch wanted.

Can't control what happens on Carousell

In response to a gripe that the watches have appeared on Carousell, the manager said they have no control over what happens on Carousell.

Another person reiterated that the people who were led to the holding area were just following instructions.

The complaint was that the marketing and product has failed at this point.

The Swatch manager said again that he understands their frustration but cannot take down names and mobile numbers.

By this point, he was 6 minutes into speaking and hearing out the customers before him.

He then said Swatch also cannot ascertain who queued up at what time.

Another customer brought up the issue about how those who were in the queue in the holding area could not go out to buy food or water the whole time.

One woman could be heard saying: "I'm so hungry I'm going to faint, you know?"

The Swatch manager kept nodding to acknowledge the complaints.

He then said this whole thing came as a shock to them.

This led to more discontent and jeers.

The manager then turned around and walked off as he mouthed: "I'm done" 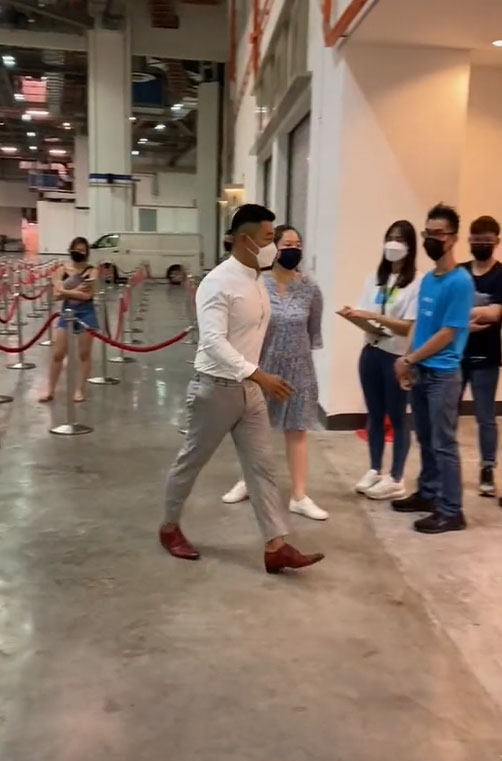 One person off-camera could be heard saying: "Lousy management."

The end of the clip showed the crowd breaking into cheers and applause, as one person asked for the "next better player".

A majority of the reactions on TikTok sympathised with the Swatch manager and praise him for holding his ground, with some commending him for his patience in a difficult situation while face to face with multiple disgruntled customers at one time.