How would you react if you suddenly became "the world's most hated person for the week"?

Social media influencers Nicole Choo and Daryl Aiden Yow recently shared their individual experiences of online bullying and how they overcame their respective sagas in an video interview with Our Grandfather Story.

Back in the day, 31-year-old Yow gained fame as a photographer/social media influencer for his stunning photography and association with fashion influencer Andrea Chong.

In June 2018, however, he was exposed for using digitally altered images, as well as photographs taken by other photographers, and passing them off as his own photography.

Repercussions of the exposé

Yow admitted that he did not know how to react initially when the exposé blew up.

He recalled refreshing his notifications every second to a flood of negative comments from people who were not following him.

The controversy even gained the attention of international news outlets, he added.

The influencer revealed that his address was circulated all over Facebook, and someone had even splashed black paint on his front door, causing his mum to be terrified.

In addition, Yow was so scared that he wore hoodies all the time, to obscure his identity.

When he was driving, the influencer wouldn't dare to stop next to another car, fearing that they might recognise him and attempt to hurt him.

Besides the public disgrace he experienced, Yow also felt shame towards his family.

This was especially so when he witnessed his mother crying while she continued scrolling through more articles about the exposé on her iPad.

According to Yow, what hurt him the most was watching his friends turn their backs on him, which caused him to no longer trust people that easily.

This adversity was a rude awakening for Yow, but it also allowed him to see who his true friends were.

Those whom the photographer had believed were his friends had unfollowed him, posted about the exposé, and mocked him for his downfall.

"You thought everybody wanted to be your friend but look, they just used you and now when you are down, they still kick you even lower."

Yow even shared an anecdote about a client whom he had considered friends and gone out of his way for, saying, "I would send her around to pick up her kids [and] send her home."

Once the saga hit, this client dropped Yow, sent him a termination letter, and has never contacted him since.

Although the experience of losing his friends was painful for him, Yow said that it opened his eyes to the "ugliness of some people" and he valued the opportunity to see who his true friends were.

Yow: I deserved it

Despite the hate that he received from the exposé, Yow boldly admitted that he deserved it, which was something that he had told himself "for the first three days [of the saga], at least".

He confessed that he was "greedy for money" and wanted to close the numerous campaigns he had at that time.

He shared that if he was unable to achieve a certain background or mood for the photograph, he would opt for the "shortcut" so he could complete the campaign and invoice the client.

This mentality that he had at that time was wrong, he said.

He also recognised that an influencer's mistake tend to be magnified.

However, Yow pointed out that netizens are crossing a line when they tell the accused to kill themselves over photos, or constantly harass the people around the accused about the issue.

He pointed out that such "threatening" actions are no longer constructive.

On his own Instagram account, Yow also shared more about why he decided to take up the interview, and provided a fuller context to his account of being terminated by the client/friend. 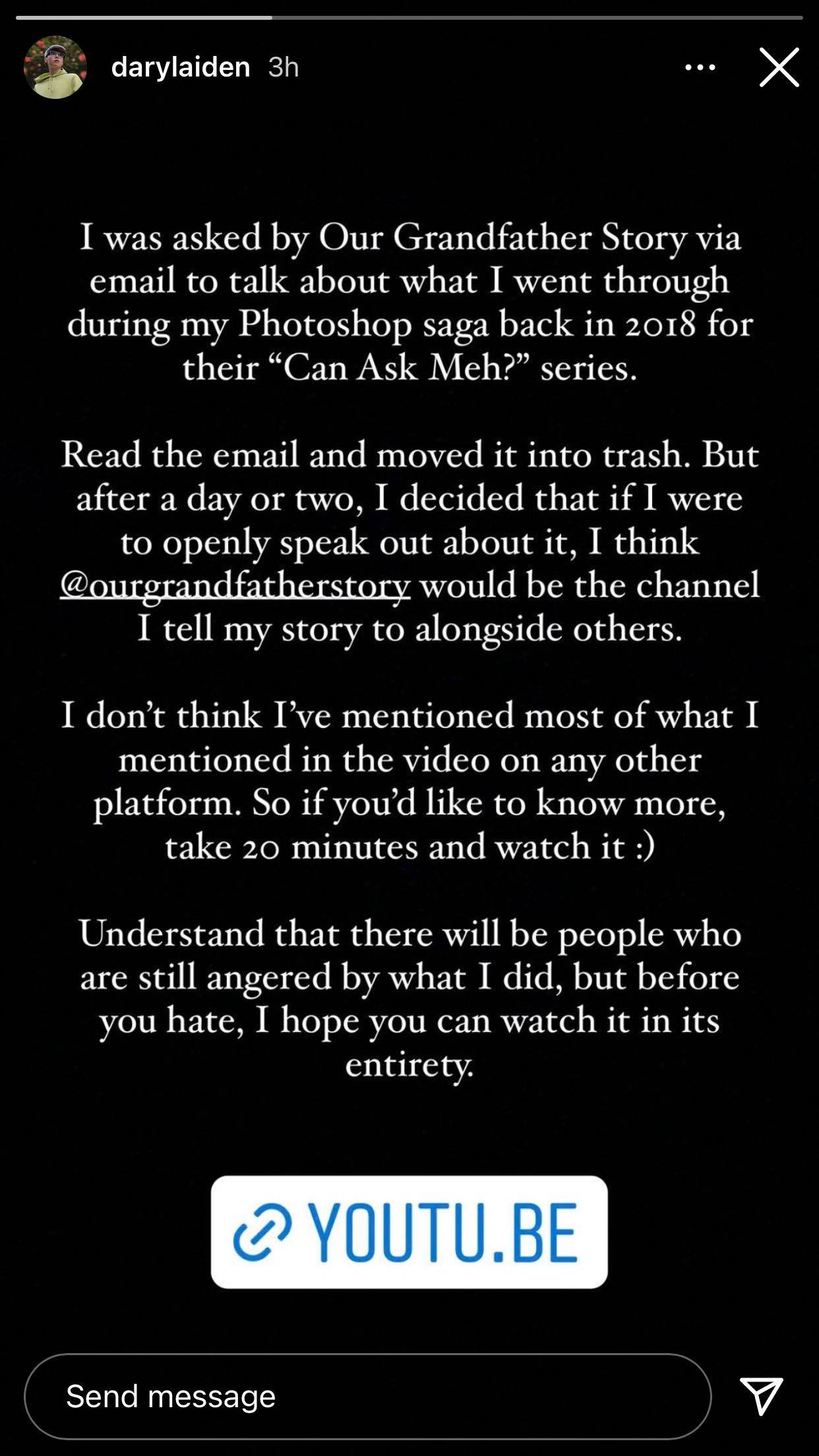 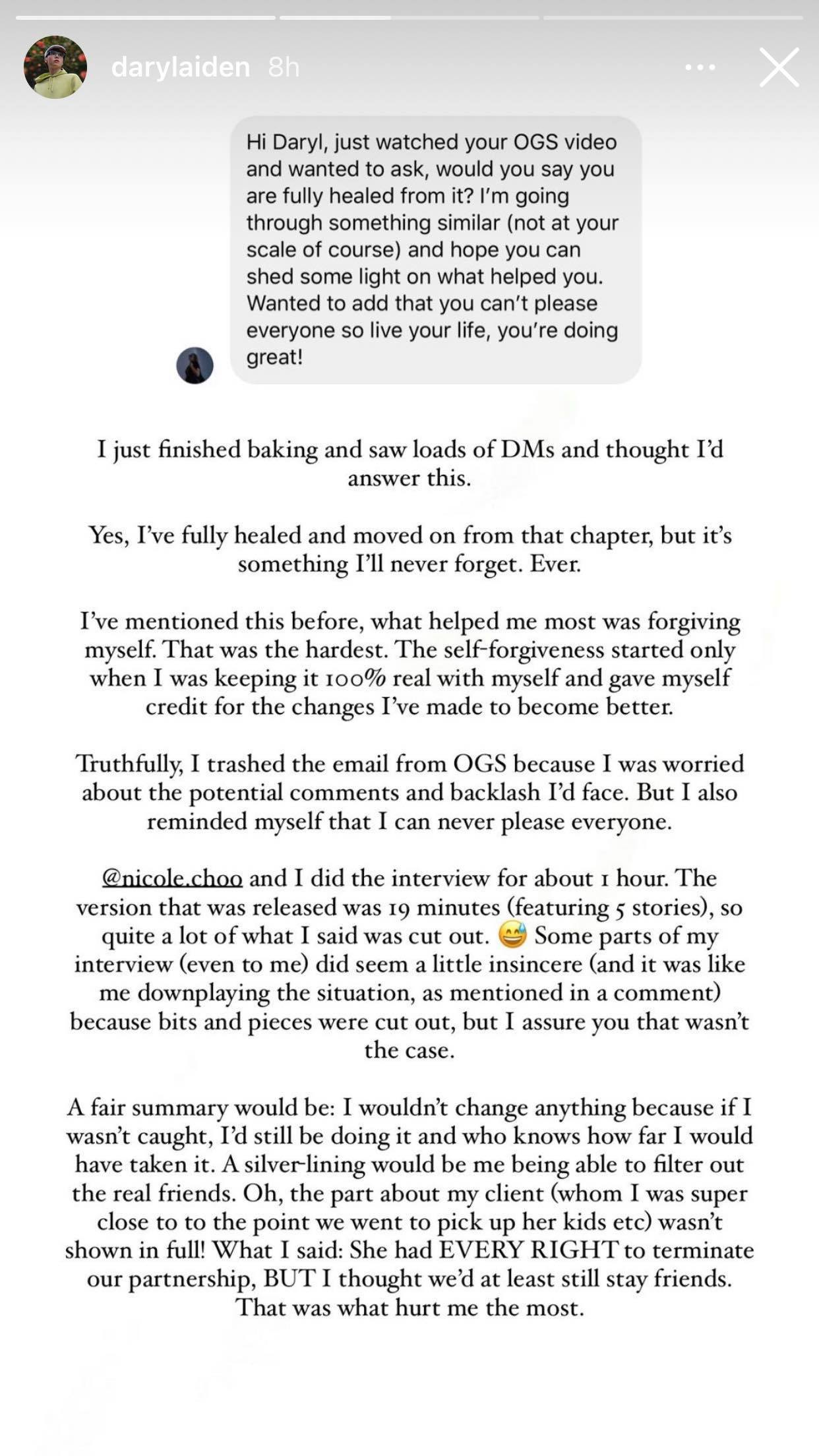 On the other hand, many people got to know Choo in 2015 when she entered a relationship with "Ah Boys to Men" actor Ridhwan Azman that ended in a messy break-up in 2017.

She was cyberbullied after YouTubers Hirzi Zulkiflie and Dee Kosh made fun of her book in a YouTube video that went viral.

Unlike Yow, Choo felt that she didn't deserve the bullying for releasing her book, which Yow agreed with.

Hirzi has apologised for the offensive video, which has since been removed.

"If it's a way of expressing myself, I'm not hurting anybody," Choo said. "I didn't do anything wrong."

However, the 23-year-old acknowledged that her reputation prior to the book launch might have contributed to the bullying she faced.

She also felt that putting herself on social media at a very young age gave rise to the assumptions about her and led to scrutiny on her life.

Both public figures coped with their respective sagas in different ways.

Choo shared that she had gone "to Melbourne for months, trying to escape everything."

Yow's choice of escape was through meeting new people and gaming, adding that he did not want to be around "people who were progressing" because it made him feel worse.

Their sagas continue to haunt them three years later.

Her book has become a bit of a sore spot for Choo, to the point that if people ask her about it, she "feels like they are mocking" her even if they do not have any malicious intent.

Similarly, Yow's camera no longer reminds him about his "amazing travels."

Instead, he thinks about the photographs that he took and Photoshopped that caused everyone to shame him and make him feel like he had no talent.

When it comes to the hardest part about moving on, Yow and Choo identified self-hatred and reduced self-confidence respectively.

The author of "Nineteen" had been so afraid of her own book that she stopped writing and reading her own work until two months before this interview.

Choo admitted that while she still likes some of her work in the book, she has grown a lot since penning them when she was 19, "I would have done things differently, but I don't regret it."

Undeterred by their individual sagas, Yow and Choo are still active on social media now with more than 100,000 followers each.

You can watch their interview here:

Top images via Our Grandfather Story/YouTube