Following the relocation of some Sin Ming chickens, another wild animal is embroiled in human-wildlife conflicts with people in Singapore - Wild boars.

In the past month, two encounters of wild boars were reported, one involving a case of injury.

On Nov. 17, a woman suffered injuries on her left leg after a collision with a wild boar in Pasir Ris, along Sungei Api Api.

In a video of an unrelated encounter that was uploaded to social media on Nov. 22, a wild boar was seen brazenly approaching a lady holding a bicycle, and did not give up on pursuing the food in her bicycle basket until it grabbed the plastic bag and ran off.

After the attack at Pasir Ris, an online survey was conducted to find out what residents had to say about wildlife in their estate.

On Facebook, a variety of comments have emerged, each lending his/her voice to the issue of human-wildlife conflict.

Some pointed to human development or habitat destruction as a factor leading to increased encounters with wild boars.

Some highlighted that they have encountered various wildlife in the area and how they never had an unpleasant encounter.

At the same time, there were also Facebook users who expressed safety concerns should there be an overpopulation of wild boars:

While the residents' opinions are important, such human-wildlife conflicts should not be dealt like a source of disamenity to residents.

What would prevent such unfortunate "attack" from happening is to identify and address the root causes which were rightfully highlighted by netizens.

Pasir Ris Park is not given the same protection from development as nature reserves, and the forested area can be developed when deemed necessary.

Earlier this year, a newsletter distributed to residents of Pasir Ris showed an upcoming Build-To-Order (BTO) launch between Pasir Ris Drive 3 and Pasir Ris Green (as seen in the highlighted green area below):

According to the newsletter, nature groups have been consulted and the development will be done "sensitively".

The project promotes "lush greenery" and green corridors in the neighbourhood:

Responding to the incident where a woman was injured by a roaming wild boar in Pasir Ris,  one comment also pointed to one BTO development, Costa Grove, which could have led to more sightings of wild boars.

The once forested land where Costa Grove is built on is estimated to be about the size of more than 10 football fields, or 75,355 square metres, according to Google Maps:

Residents living across the road also noted that the clearing works have taken place in that area since September:

Now that this huge plot of forested area is gone, where would the wild animals, which presumably include wild boars,  that once live here go?

Loss of habitats will force animals to venture out

One nature enthusiast, Jimmy Tan, observed that similar incidents involving wild boars were reported in the past when development projects happened in Lentor Avenue and Punggol.

Habitat loss displacing wildlife from the greenery that animals used to reside or forage in, and clearing such land can lead to animal moving out towards other surrounding areas in an effort to find food, mates or new homes.

Wild animals might also have to adapt to an increasingly urban environment, which means that they could start looking for food in nearby residential areas.

When wild animals live in close proximity to residential areas, they might venture out to urban areas and could encounter people who might feed them.

How feeding wildlife can change their behaviour

While it is an act of kindness to some people, feeding can contribute to human-wildlife conflicts in the long run.

Wild boars have come to associate people with food and this happens due to people feeding wildlife, local biologist and the National University of Singapore lecturer N Sivasothi explained.

Therefore, wildlife would choose to eat this if they can, as compared to natural foods from the wild.

While those who feed wildlife can be fined up to S$5,000 for a first offence, and up to S$10,000 for a second or subsequent offence, under the amended Wildlife Act, some are still unaware of this and might see the feeding of wildlife as cute or entertaining.

In response to the incident, NParks advised the public against feeding wildlife such as wild boars, as it can result in an over-reliance on humans for food, which can have adverse impacts on the behaviour of the animals and the balance of the ecosystem.

Processed foods like bread can also cause health problems for wildlife, and also cause an unnatural and unsustainable, artificial increase in wildlife populations.

How do we move forward?

Since the incident of the wild boar attack near Sungei Api Api, NParks has put up more signs on what to do when you encounter wildlife and to raise awareness on the penalties of feeding wild animals.

However, in Teo's Facebook post, it was unclear what the next course of action would be with regards to the wild boars in Pasir Ris.

Deputy chief executive officer of Acres Kalai Vanan told Mothership that instead of reacting to incidents, it would be better to prepare and prevent such incidents from happening in the first place.

In areas with wild boars, he suggested for the following:

He added not to approach wild boars, especially those with piglets as they can be protective.

In response to the recent wild boar incident in Pasir Ris, nature guide, Ivan Kwan, also highlighted that it is important to teach the public how to co-exist with wild animals as Singapore works towards its vision of becoming a "City in Nature".

Kwan, also a volunteer from nature group Naked Hermit Crabs, conveyed that the group has been leading guided walks at Chek Jawa and the Pasir Ris Mangroves for more than a decade, without any such negative encounters with wildlife.

Wild boars should not be viewed as either fearsome monsters or pets, but instead keeping a safe distance from them "reduce the likelihood of such incidents happening in the future".

Here are some things to take note when you encounter a wild boar: 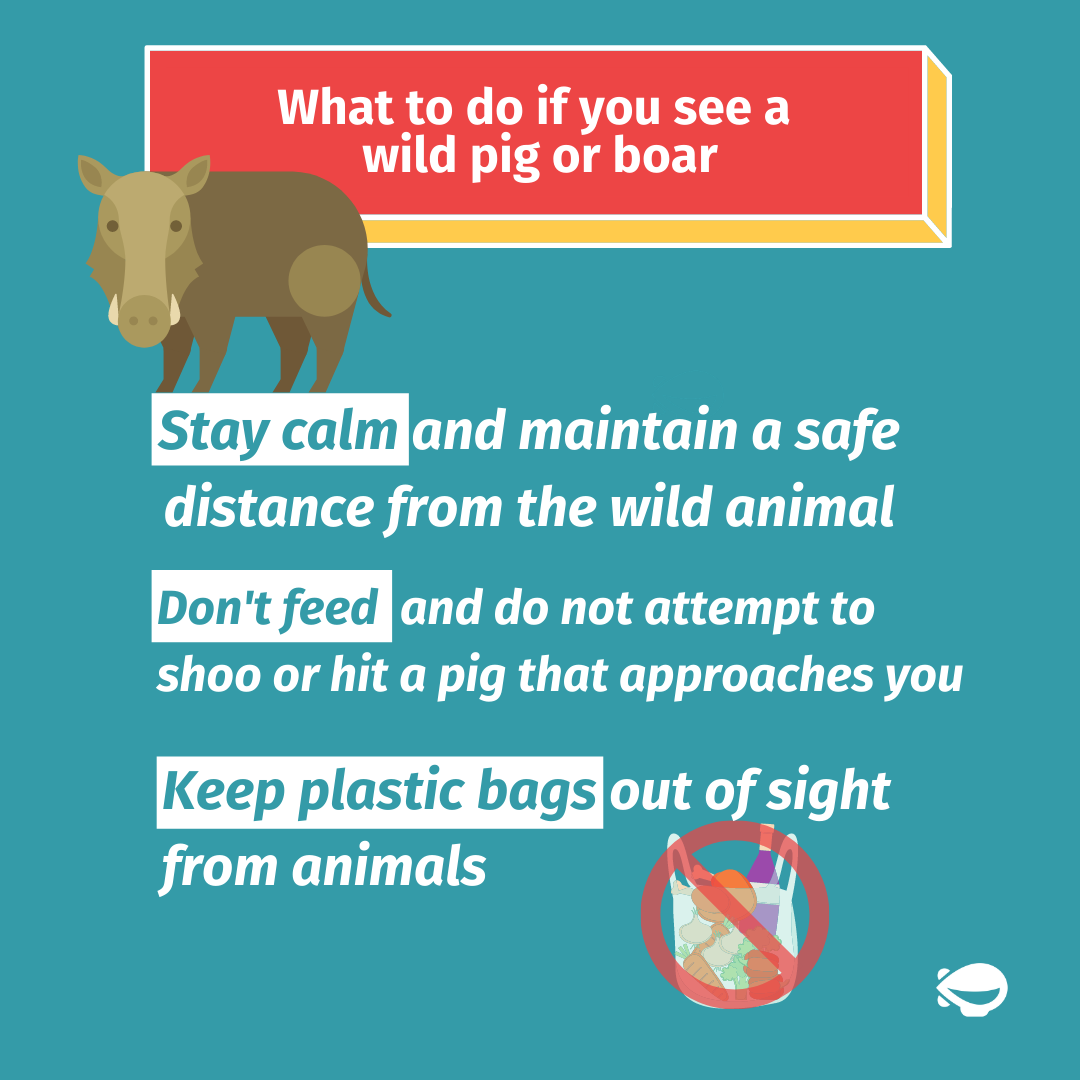