The 55th Golden Horse Awards was held on Saturday (Nov. 17) in Taipei, Taiwan.

But rather than the award winners, cross-strait tensions were the highlight of the event.

In her acceptance speech for the best documentary award, Taiwanese director Fu Yue voiced her desire for Taiwan to be recognised as "independent" one day.

Fu was born in Malaysia to her Malaysian Chinese Father and Indonesian Chinese Mother. She moved to Taiwan when she was 9 in 1991.

Fu's documentary, Our Youth in Taiwan, talks about the 2014 Sunflower Movement and its aftermath -- the protests targeted then-ruling Kuomintang's seemingly pro-China policies.

Lee looked worried at first and refrained from clapping like the rest of the audience, before giving a belated smile.

Sitting next to him was Chen Li-Chun, Taiwan's Minister for Culture.

However, that's not the end of the drama that night.

Going on stage to give out an award later, famed Chinese actor Tu Men gave a pointed rebuke in response to Fu's speech.

Translation: I'm extremely honoured to have come to the Golden Horse Awards here in China, Taiwan, once again as a guest.

I see many familiar faces here this time, and have made many new friends, which makes me feel we are all one family on both sides of the Taiwan Strait.

Adding to the night's drama was when Gong Li, who was also chair of the awards jury, stayed in the audience and refused to stand on stage together with Lee, despite Lee asking her on stage if she wasn't going to join him, according to Sina.

While BBC reported that it was due to Fu's pro-independence speech, China Times speculated it was because she wanted to avoid her old flame Zhang Yimou, who was one of the nominees for the award due to be given out.

Lee also reportedly tried to salvage the situation by calling for politics to be kept out of the award show.

However, in widely-circulated pictures of the post-awards gathering, the event was revealed to have been poorly attended, with some stars like Hu Ge returning to mainland China earlier than planned, according to Shanghaiist. Cheng, who was seated beside Lee during the event, uploaded a picture taken together with Fu and expressed her support for the latter.

But please remember: This is Taiwan, not "Chinese Taiwan".

Congratulations to Director Fu on winning the Best Documentary Award for Our Youth in Taiwan!"

Taiwan's President Tsai Ing-wen reiterated what Cheng said, and took the chance to give a thinly veiled criticism aimed at Beijing:

Translation: "We have never accepted the phrase "Chinese Taiwan", and will never accept it. Taiwan is Taiwan.

I'm proud of yesterday's Golden Horse Awards for it shows through our freedom and diversity that Taiwan is different from China, and that this is the place where artistic creations can be free.

The Golden Horse Awards embody this spirit. We welcome all filmmakers to come work and interact with us here in Taiwan. Nobody will go missing here just because he or she voiced a different opinion. We also don't have any words that are censored online. Because this is Taiwan. Not only do we hope our guests can enjoy the air of freedom here, we hope that they will respect the Taiwanese people's opinions too.

Taiwan is a free and democratic society. We have the freedom of speech. But yesterday, many people left disparaging comments on both Director Fu and Minister Cheng's Facebook pages. We oppose such cyberbullying. Those who express their opinion freely do not deserve to be bullied nor threatened."

"This is China, not one bit less"

Fu's remarks on stage sparked a storm on Chinese social media across the Taiwan Strait.

On Saturday (Nov. 17), the Communist Youth League first reposted a 2016 post that featured a nationalist poster along with the caption "This is China, not one bit less".

The poster proclaimed that Taiwan, as well as the islands within the 9-dash line, all belonged to China. 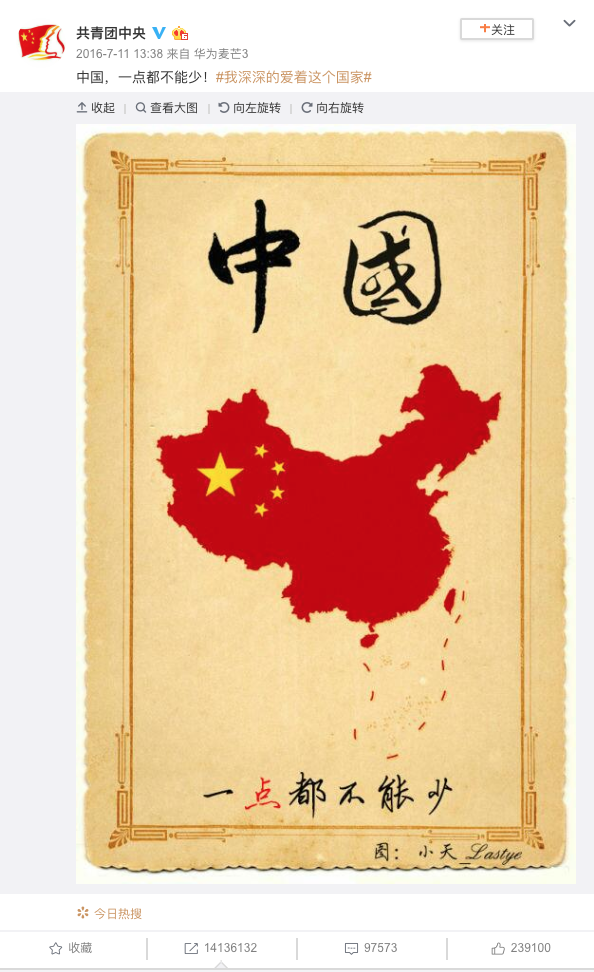 This became one of the trending topics on Weibo, sparking almost 8 million reposts barely two days after it was first posted.

Around 250 celebrities joined in to repeat the slogan, including Wu Jinyan and Xu Kai of "Yanxi Palace" fame:

Chinese supermodel Liu Wen, who previously got slammed by Chinese netizens for using "Lunar New Year" instead of "Chinese New Year", also jumped onto the bandwagon:

China's richest actress, Fan Bingbing, who dropped off the radar after her tax fraud but returned with an apology recently, joined in too:

Hong Kong celebrities, such as actors Jordan Chan and Hawick Lau, as well as K-pop star Jackson Wang, did the same.

The tagline has its origins in the 2016 Permanent Court of Arbitration ruling that ruled in favour of the Philippines' claims, invalidating Beijing's claim to most of the South China Sea.

Taiwan under President Tsai Ing-wen of the pro-independence Democratic Progressive Party (DPP) has yet to acknowledge the 1992 Consensus, which is the tacit agreement between Beijing and Taipei that there is only one China, albeit differing interpretations of what that means.

This has been one of the sticking points for cross-strait relations, with China ratcheting up its diplomatic pressure on Taiwan internationally after Tsai failed to affirm the 1992 Consensus.

Taiwan is an extremely sensitive territorial issue to China. China considers the self-ruled island as a renegade province and does not rule out the use of force to bring it under Chinese control.

Here's how you fake being artsy to impress your date/boss/future mother in law.

Read this and cry in a corner.

Kids teach us the darndest things. But it makes sense.

Wanna run away from your responsibilities?!