The founders of the Italian fashion house Dolce & Gabbana have issued an apology to the Chinese people over video on Friday, Nov. 23.

In the video, Stefano Gabbana and Domenico Dolce spoke of their love and respect for Chinese culture.

The fashion house has faced the intense wrath of the Chinese after an Instagram conversation allegedly showing Gabbana describe China as a “country of s***” was leaked.

However, Friday’s video did not appear to be enough to appease the fashion house’s critics.

One Weibo user wrote: “We have a right to reject your apology, go make money off other countries, you aren’t fit to make money in China.”

“The apology was posted by the hacker,” other users joked.

Before that, the brand had already faced widespread criticism for an advertising campaign, which featured a Chinese model struggling to eat Italian dishes like pizza and cannoli with chopsticks and prompted accusations that it was stereotyping the Chinese.

The fashion chain then cancelled a show in Shanghai on Nov. 21 and retailers in mainland China and Hong Kong have stopped selling its products.

Video footage of a protest in Milan outside the brand's store on Wednesday showed dozens of Chinese people holding “not me” signs.

The term “not me” has been adopted worldwide by people angered by Gabbana’s comment. 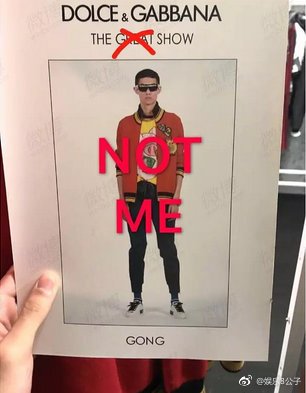 Gabbana had claimed that his Instagram account had been hacked as the company had previously apologised to “China and the Chinese people” and expressed regret that its Shanghai event had been cancelled. 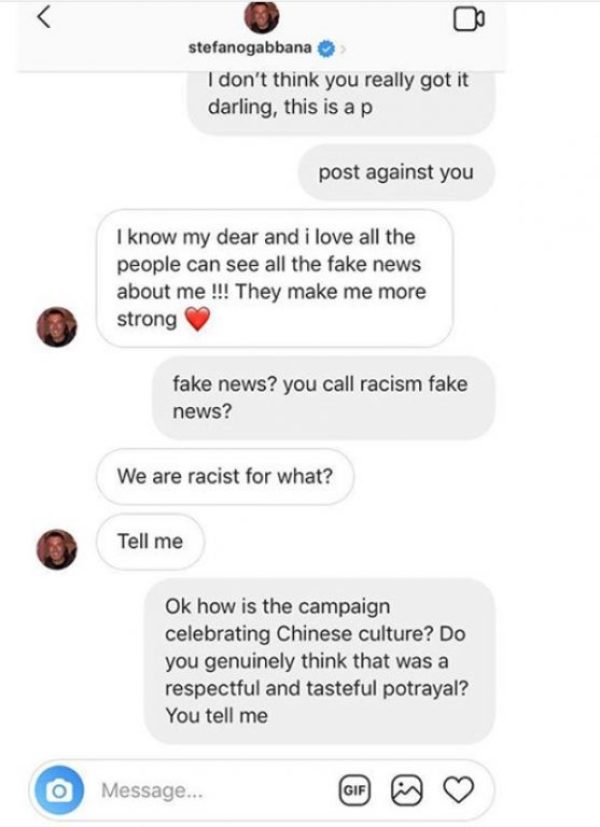 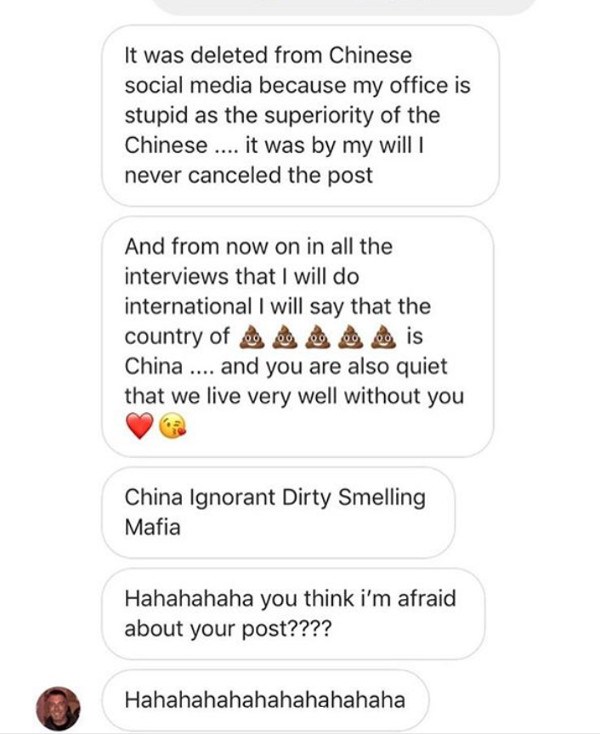 In a bid to continue defending themselves, Gabbana shared a post on Thursday by another Instagram user that defended the brand and its founders.

“If Dolce & Gabbana was racist, they wouldn’t pay tribute a lot of times to China or Japan, or even having Chinese models on their shows runways or advertising... I’m a proud Albanian, I worked with them and never saw racism in them! I’m so sorry for people who always see only the half empty glass,” the post said.

Chinese celebrities, including Couching Tiger, Hidden Dragon star Zhang Ziyi, joined the chorus of criticism after they had been signed up to attend the multimillion-dollar event.

The Italian designers appeared to cave to mounting public pressure when their products were removed from online stores across China.

But the pressure does not appear to be abating just yet.

A screenshot of a WeChat conversation between a customer seeking a refund and a representative from Dolce & Gabbana’s children’s line has gone viral on Chinese social media.

The woman said she no longer wanted to wear the brand for fear people would “throw s***t at her” and asked for the 2,400 yuan deposit she paid the company to be returned.

A Chinese foreign ministry spokesman Geng Shuang said on Thursday the hullabaloo was not a diplomatic issue and China did not wish to escalate it into one.

“Instead of asking the foreign ministry spokesperson, it is better to ask the ordinary people in China to see how they view this issue,” said Geng.

Dolce: Over the last few days, we have reflected on our actions and how it has impacted the Chinese people, and we are deeply sorry. We come from an upbringing that taught us to be respectful of other cultures. We seek your forgiveness in our failure to understand your culture.

Gabbana: We place great emphasis on this apology. We, hereby, offer our deepest apology to Chinese all over the world.

Dolce: We have always loved China. We have visited China many times and with each visit, we fall deeper in love with the Chinese culture. But of course, there is still a lot to learn. With regards to the earlier mistake we made, we are deeply sorry.

Gabbana: We will never forget this experience and lesson. This will never happen again. We will do our level best in trying to better understand Chinese culture. Finally, we seek your understanding from the bottom of our hearts.

??
Are you smarter than a 5th grader Smart Ah Ma?

??
Get arty and impress your date/boss/future mother in law without breaking the bank.

???
This 89-year-old uncle once wandered from Choa Chu Kang to Bedok.

??
"It does not matter how slowly you run as long as your instagram shots look nice", right?