We'll say this as many times as it needs to be said: sexual harassment is more prevalent than we think, even on the "safe" island of Singapore.

After being sent grossly inappropriate (albeit misdirected) messages by a man she has only interacted with professionally in the past, Singaporean fashion and lifestyle influencer Andrea Chong spoke out online to shed more light on the subject of female objectification.

An "earnest and sincere mover"

Chong and her assistant Elsie had been setting up their new office space, and so engaged a mover to assist them with the process. She described him as appearing to be "earnest and sincere".

However, when Chong was cleaning up her space on Dec. 17 with her best friend Daryl, she received the following image and text message from the mover, whose name we understand to be Roland: 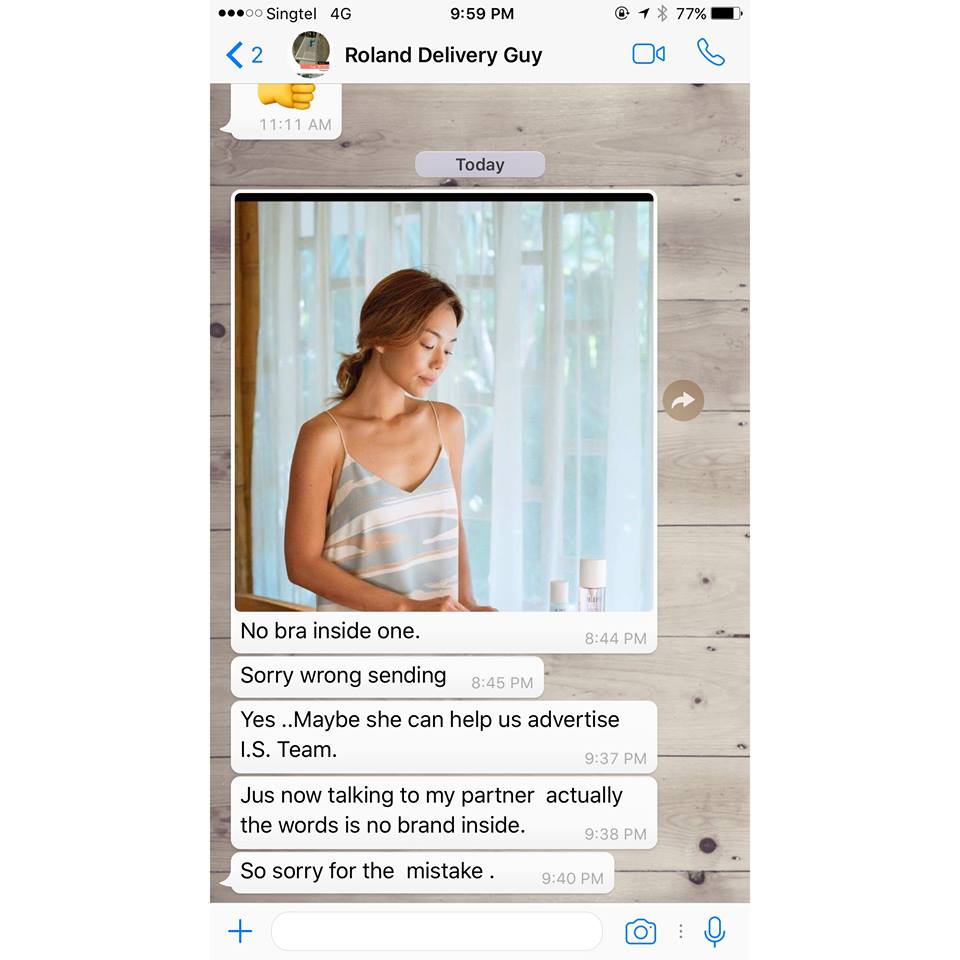 Note the time lapse between the first two messages and subsequent texts — almost an entire hour.

Here's the sequence of messages, with their time stamps, based on the screenshot she posted:

We're not sure why he apologised and then sent another text (number 3, at 9:37pm) that didn't make sense, either — a whole 52 minutes later, no less. Perhaps it was “damage control”, as Chong put it?

But anyway, following this stream of messages, Chong says she looked at her phone for two minutes in disbelief, and promptly cancelled her appointment with "Roland", originally scheduled for the next day.

Not the first instance of harassment

Sadly, Chong says this is not the first time she has encountered sexual harassment.

In the same Facebook post, she recounts the many other instances in which she was harassed or intruded upon, such as the time another person touched her arm inappropriately, or when she was catcalled by men who denied it when she confronted them about it.

You can read it here:

And the full text of her sharing here:

Let’s talk what happened tonight first. Over the past week, my assistant Elsie and I have been in the midst of setting up our new office space. We engaged a mover, whom we came to like because we felt he was earnest and sincere. We then engaged him for two more moves, the last of which was supposed to happen tomorrow.

However, while cleaning up the office with my best friend Daryl this evening, I received the following text messages from our delivery guy. It started with a message he had intended to send to a “business partner “ which got accidentally delivered to me instead. Subsequently, he went into damage control mode, and came up with excuses, as you can evidently tell.

When I saw the messages, I looked at my phone for a good 2 minutes in utter disbelief. Daryl, noticing me, asked what happened. When I showed him the messages, he was left speechless as well. We then proceeded to contact Elsie and my boyfriend Imran, and made the decision to immediately cancel the delivery appointment we had scheduled for tomorrow.

Now I’m not here to crucify this mover or his company, because that does not solve or address the overarching issue: how some guys think they can get away with objectifying women. Perhaps I’m in and over my head for thinking this issue can be “solved” in the first place, but here’s my two cents worth anyway.

It sucks when I was inappropriately touched on my arm at a restaurant in Bangkok. All I wanted was to have a nice dinner with friends. I couldn’t help but feel like washing my arm over and over again throughout the night.

It sucks when I was catcalled by a bunch of AV-Crew Guys while taking a photo outside the National Gallery (I was in turtleneck and overalls). It sucks even more when I tried to stand up for myself, confronted them, only to have them deny their catcalling. I called the AV company crying and in absolute distress – again, my assistant Elsie had to watch me – only to have them tell me they will let their management know about this. I did not get a reply.

It sucks when I got into a taxi after giving a career talk at the Girls Home – trying to motivate girls to do better and be better – only to have the driver tell me “So, what were you doing [at the Girls Home]? To talk about how bad you are?”

It sucks when here you are, trying to grow a business and set up a company, only to have a mover – whom your assistant and yourself have sung nothing but praises about – undermine you entirely by talking about whether or not you were wearing a bra underneath a dress. To which I will answer now, yes I was.

Was I showing too much skin? No. Was I behaving inappropriately? No. In fact, it also sucks that my assistant had to go through two of the aforementioned experiences with me, and all both of us were trying to do, was work.

I may not have been physically attacked, but psychologically I have been affected for life, all because some guys think that it is okay to catcall and talk about their client’s breasts, to which, has no relation to an armchair and a dresser they have to pick up the next day. I mean, forget about growing my business or giving talks to young girls, let’s talk about whether or not I wear bras underneath dresses, and how “bad” I actually am.

So to some of those dickheads out there, stop catcalling, stop talking about other people’s breasts (I’m sure as hell not going around talking about penises), and stop encouraging your guy friends to talk that way.

I did my secret Santa shopping online and *gasp* saved money