All of Singapore woke up to a Singaporean-psyche shattering saga that exploded onto the internet just after 2am on June 14, 2017.

This meant people abroad in other time zones (particularly Europe and the US) were discussing it for hours before Singaporeans here even realised Lee Hsien Yang had created a Facebook page to post a six-page statement co-signed with his sister.

The mainstream media in Singapore, which has prided itself with breaking news, was surely stunned like the rest of us -- from the looks of how they were not covering the issue for hours after it happened.

The majority of Singapore's English media only started publishing stories on the saga at least six hours later.

Here's the first post from The Straits Times, at 8:45am:

'>
They subsequently updated the same story with PM Lee's response, but interestingly, did not update the original Facebook post until significantly later on. And the ST article did not have a byline.

However, Channel NewsAsia's first post on this only emerged at 10:15am:

'>They also did not cover the siblings' earlier statement separately, apart from writing several paragraphs about it in the same article.

Meanwhile, SPH's free sheet and traditional gossip tabloid The New Paper has been conspicuously silent by not reporting anything.

In Chinese media, only Lianhe Zaobao has shown any activity with regard to the unfolding saga. Their first post came out at 9:43am:

While their second update with PM Lee's statement emerged at 10:31am:

'>This will be interesting. We'll keep watching.

Lee Hsien Yang's son, Li Shengwu, has a theory though: 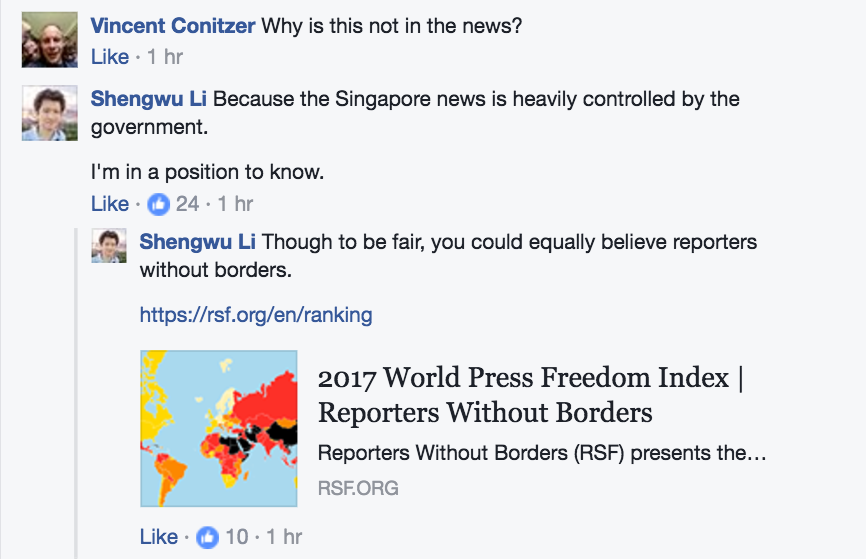