A family of otters were spotted on Sunday, Nov. 13, at the outdoor volleyball court at the Sports Hub chilling, minding their own business and digging holes in the sand. 😍 😍 😍

They are believed to be the celebrity Bishan 10 family.

They were seen goofing off and frolicking in the sand, but all the while remaining alert as some kept watched while others slept or relaxed. 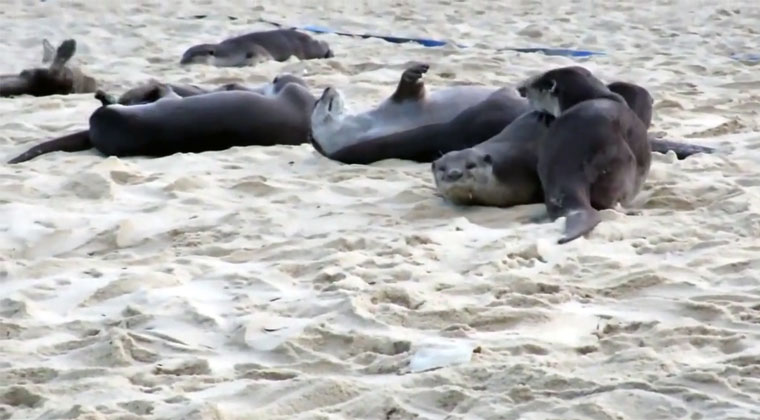 At one point in the video, a voice could be heard saying: "They all look the same ah, she's not that fat?"

The first time this particular family of otters made waves was in April 2015.

Then, two adult otters -- believed to have swam over from Malaysia in the north to Singapore -- were caught on camera with triplet baby pups in tow, having settled down in Bishan-Ang Mo Kio Park.

They have since been caught on camera numerous times, warming up to local Singaporeans and going to the extent of mingling and integrating with them and even playing tag.

The otter family of five then succumbed to touristy pressure and went on a Singapore tour, visiting St Andrew's Junior College, Gardens By The Bay and even The [email protected] Bay among other places.

However, one of the otter pups was subsequently injured after a fishing line hook got tossed into the water by an angler and caught onto its leg.

It later miraculously recovered without suffering any further visible injuries or deterioration.

Bishan-AMK Park otters have 5 new baby pups, which makes them a family of 10 in total

Bishan Park’s man-made river is now home to at least one wild otter. This time-lapse video shows how river was created.

Otter family of 5 succumbs to touristy pressure, visits Flower Dome at Gardens By The Bay

Otter family of 5 are really just dogs in disguise, played tag with cameraman at Kallang River