GDLL stands for Give, Donate, Laugh, Love. Trust us, we know how that sounds.

With the amount of "Who cares?" in our comments sections, we thought, “Hey, we know people who do.”

For every weekend during this festive period, we are featuring local personalities who care, and the ways they do so.

You might know Nurul Aini as the Ah Jie (big sister) of Suria -- not that she'd ever acknowledge it, because she's too paiseh.

Perhaps you've come across her viral videos, where she hilariously pranks scammers in fluent Chinese.

Regardless of how you got to know about her, there's one thing that you're likely to have missed out on: how much she does to give back to society.

Nurul often shares charity campaigns on her Instagram Stories -- be it a volunteer asking for funds to feed more of those in need, or of a family whose lives were devastated in the matter of hours after a fire razed through their flat.

"When you guys approached me, I was like, do I really deserve a whole interview about me giving because I don't think I give a lot," she laughs during her interview with Mothership.

"But then I felt that if this interviews goes out and people might, you know, get inspired. You never know, and many people doing just whatever they can really adds up."

Calling herself an advocate for people -- "I don't champion a single cause because I just want to help whoever I can" -- the actress has witnessed the power of social media firsthand.

Just this year, she came across a family who lost their home to a fire.

She recounts: "Overnight, this single mother had no place to stay, her children's clothes are gone, they have no toys, and they had no food to eat. I felt like if I were in her position, I'd be so desperate for help."

Someone that Nurul follows on Instagram shared the woman's post, and the actress reached out to ask if there was anything she could do.

After sharing the appeal on her Instagram Stories, people rallied together to help.

Clothes were donated from Instagram followers for the woman's children. The company which sponsored Nurul's home renovation offered to provide furniture and painted the woman's home.

"It made me so happy that I could help an entire family by just sharing," she beams. "It really can be the quickest way to help, because there are so many people on social media."

It started with her seeing a photo of a girl, who was about a year old, lying on the street with her parent. The actress was so affected that she posted a plea in hopes of finding the family and reaching out to them.

A Singaporean living in Malaysia reached out to her to ask for help, as she had almost exhausted her funds buying ingredients to cook for the less privileged.

Nurul said, "She [later] shared with me videos of her giving groceries [and] helping all these people. She even got lodging -- a place to for all these families. The sense of happiness I caught from there, is just [on] another level."

One thing we learned about Nurul during the interview is that she donates to every single campaign she shares on her platform.

"I also donate but I don't tell people, so people tend to be like, 'Aiya she share only. She sure don't donate one.' You know?" she chuckles.

But she doesn't let talk like this get her down, as she has made peace with the fact that the people on social media can be as vicious as they can be kind.

She also gives away items that companies gift her with because "other families need it".

While acknowledging that not everyone has the platform that she does -- Nurul has over 183,000 followers on Instagram -- she feels that the collective power of those on social media is not to be underestimated.

"I don't even remember who I see a lot of these campaigns from," she laughs. "And it doesn't matter. You might not have the means to donate to every campaign, but by sharing it on your page, there's a higher chance of others seeing it."

"I always realised that whenever I help someone, somehow or the other, something will always come back to me by multiple folds.

I don't know how to explain it... It's just like magic, that when you help someone, it will always come back to you somehow."

Children following in her footsteps

Nurul's penchant for giving has rubbed off on her three children -- Shan, 12, Shaista, 10, and Shania, three.

Her eldest started a Giving.sg campaign to raise funds for Persatuan Pemudi Islam Singapura (PPIS) last year and raised over S$5,000 in under a month. 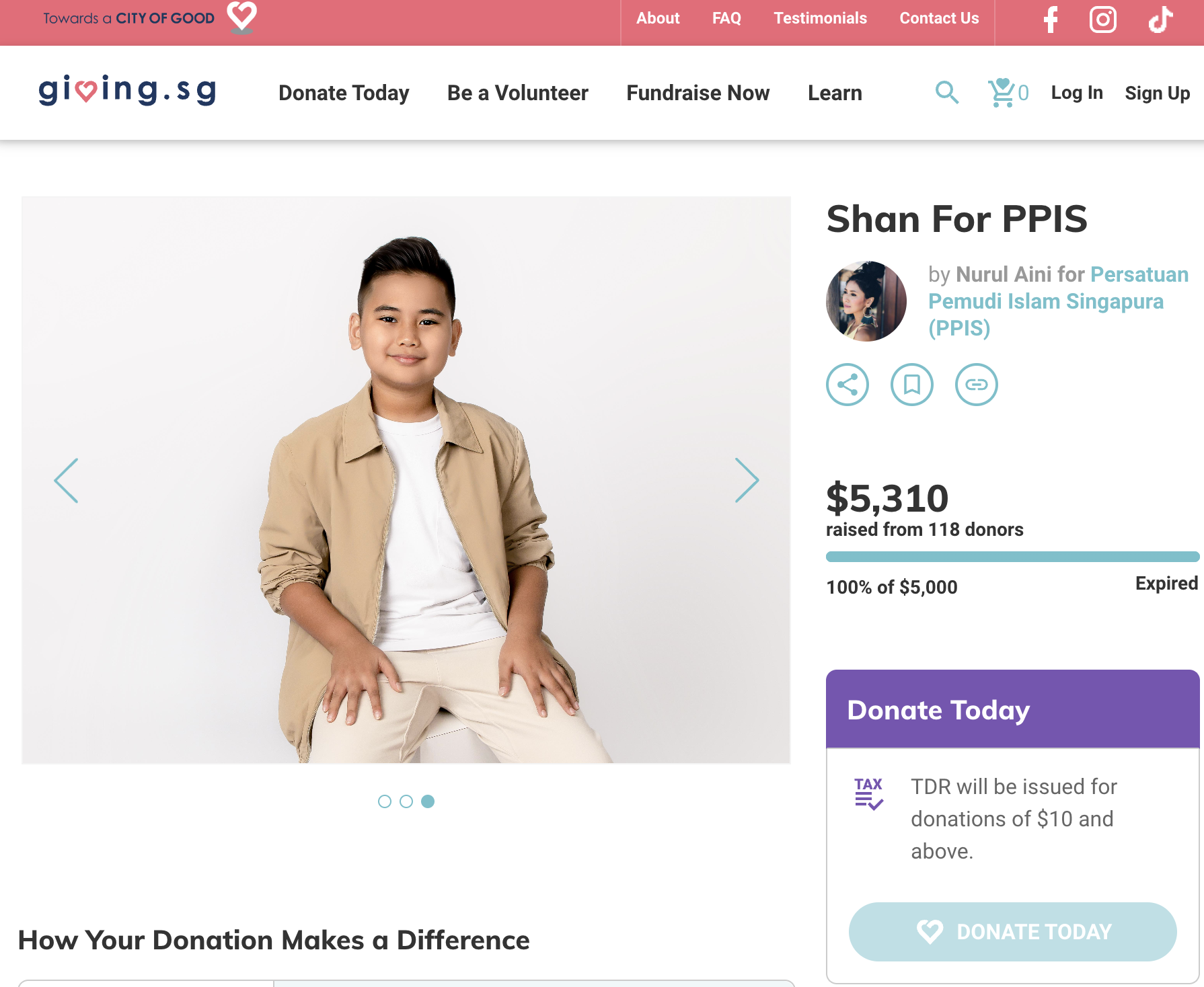 From time to time, her kids will ask her why she is doing charity. Nurul responds by showing them photos of videos of the people she is helping.

And during Ramadan, which is the month of giving, they always tell me, 'Mummy, I have a lot of pocket money. Can I donate to this charity?'

I feel very, very proud of them."