A TikTok video has been making the rounds online showing a lifehack to encash the recently disbursed S$100 NS55 credits.

The 12-second clip demonstrated a lifehack to cash out the NS55 credits.

The first step is to locate a Sheng Siong Simple Teller Machine ($TM), which is an ATM that allows users to withdraw cash from their various bank accounts and a way for the supermarket to "recycle" the cash they have collected. The next step is to press the PayNow icon on the screen and select S$90 to cash out.

The last step is to open the LifeSG app, which eligible past and present national servicemen (NSmen) who want to use the NS55 credits must download, to scan the QR code on the $TM screen.

And the cash will be disbursed.

As the $TM machines charge a S$0.20 service fee for each PayNow transaction, and can only dispense S$10 and S$50 notes, dispensing the full S$100 in cash will require a S$100.20 balance in the LifeSG app.

So, the next best option is to dispense S$90, while keeping S$9.80 as credits in the LifeSG app to be used at other merchants.

Queries in the comments section of the TikTok video asked why this method to encash the credits works.

It turns out, according to the LifeSG app, the S$100 credits "can be used at merchants accepting payment via NETS QR or PayNow UEN QR".

It appears that this cashing out method could be a loophole.

Option to use PayNow stopped

However, it also appears that this lifehack is no longer working as the loophole has been patched.

Checks by Mothership.sg at two $TM machines at two separate Sheng Siong outlets just after 1:30pm on July 7 found that the PayNow option is no longer available. 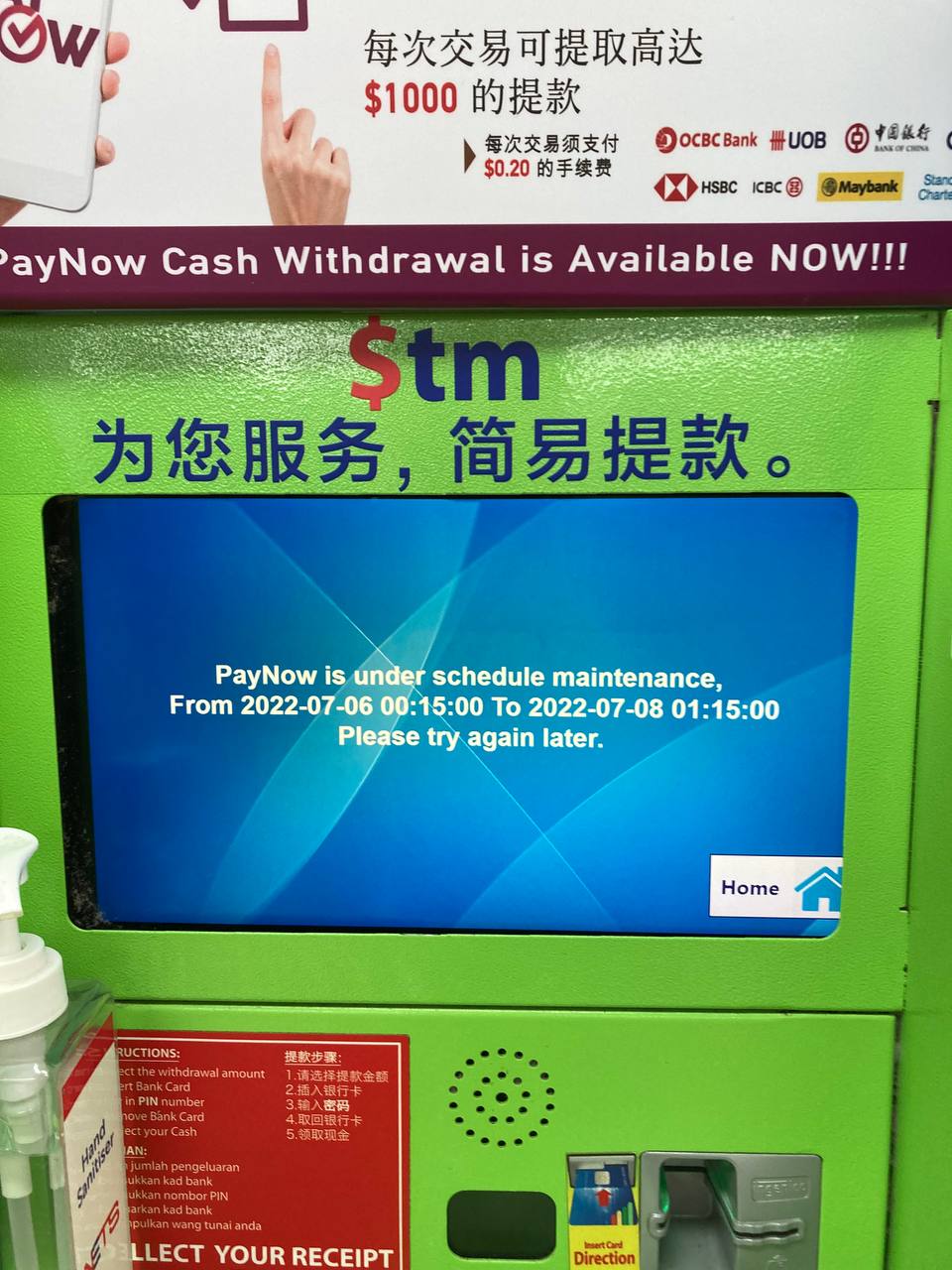 Clicking on the PayNow icon will reveal a message that the system in under maintenance till July 8, 1:15am.

But it appears the encashing of NS55 credits still worked just a few hours ago, as there were multiple receipts left behind that showed users withdrawing S$90 in cash with a S$0.20 service fee incurred. 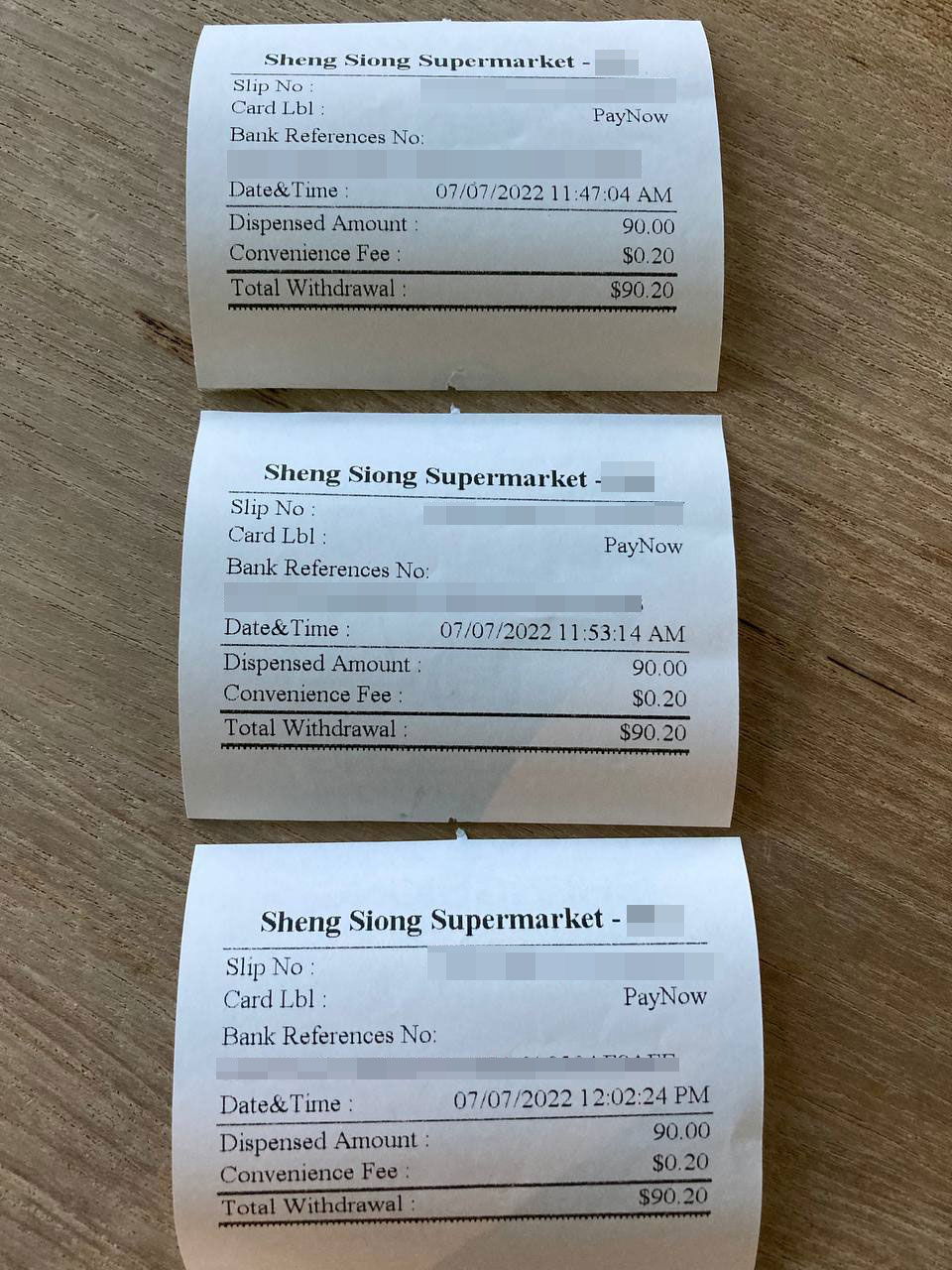 The withdrawals occurred just before and after noon on July 7.

It is not known if the PayNow option has been disabled for all other $TM or selected ones only.

Why disburse credits and not cash?

The disbursement of the NS55 Recognition Package in credits and not cash deposited into bank accounts allows transactions to be made with Singapore-registered businesses via the LifeSG app.

Cash disbursed might end up being spent outside of Singapore, such as to be used to pump petrol in Johor Bahru.

The Ministry of Defence (MINDEF) previously said NSmen will be eligible for the package based on their national service status as of May 2022.

The digital credits worth S$100 are progressively disbursed in batches to eligible NSmen from July 1 till 31.

Eligible NSmen will receive an SMS to inform them when their credits are in.

Full-time NSFs who enlist by Dec. 31, 2022, will also qualify for the benefits after enlistment.

The credits will be valid for a year.

Hardcopy vouchers can be provided to those who have “exhausted all means of assistance”, but are still unable to access or redeem their credits via the LifeSG mobile app, said MINDEF.