Update: This article has included Mat Western's statement regarding its business and additional information pertaining to what he said in the video. The stall owner, Umar, wrote on Facebook: "Please forgive me for any misunderstanding. You have all been very kind, in fact too kind. Please pardon my English, I don't speak very good English during conversations."

People in Singapore have stepped up to help out a food stall owner, who appeared emotional and vulnerable in a video interview, where he said his business was not doing well and he is at risk of falling deeper into debt and getting kicked out of his current location.

The video, put up on Facebook on May 19, was made by Chef Bob, also known as Shahrizal Salleh, who is a celebrity chef and TV personality here, as a way to spread the word around the community to help boost sales for the stall.

Umar is an experienced chef who attended culinary school in France and has worked as an executive chef in both France and Singapore, such as at the now-defunct European restaurant 7Adam.

According to the video, Umar has not been drawing a salary for 1.5 years during the period he was running his own business.

Umar said his business has been in steady decline after the recent Chinese New Year period, and he is behind on his rental for his stall and miscellaneous utilities.

The video caption also said he owes money to the landlord and suppliers.

At one point, Umar appeared emotional and started to cry.

The video then featured quick cuts of Umar's fare sold at the stall.

And it appeared help arrived swiftly after one version of the video was shared more than 3,600 times, with other copies making the rounds online.

Within the same day the videos went up, a photo uploaded to the Halal Cafe & Restaurants in Singapore Facebook group with more than 180,000 members showed the aftermath of the community stepping up: Food at Mat Western was sold out for the day as overwhelming support poured in. 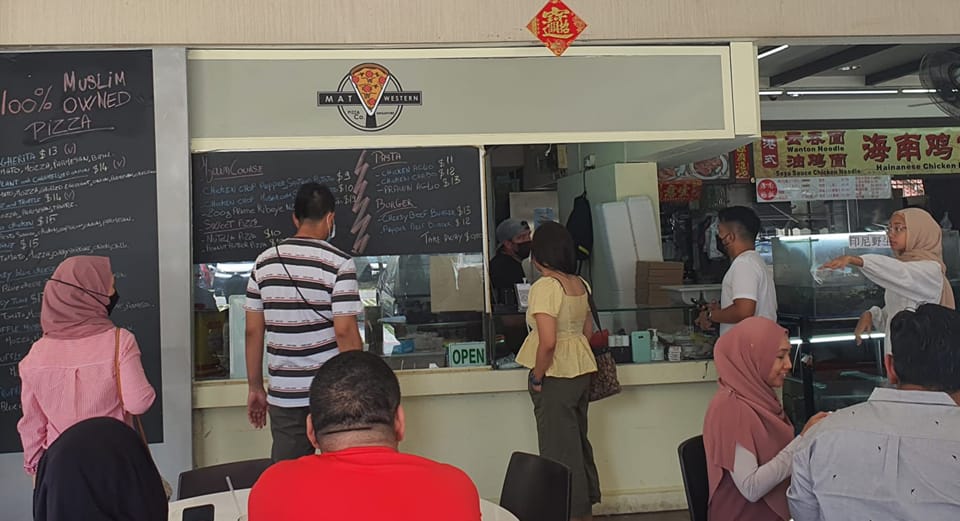 As a result of the mass orders, the stall had to close early given that food ran out.

According to the video where Umar was interviewed, the caption indicated that he requires about S$1,700 a day in sales for the next 10 days to prevent being evicted.

Quick math suggests Umar would need to make S$17,000 in total in less than two weeks and this is only the start.

In an update on the same day, Umar wrote on the Mat Western Facebook page that what he spoke about in the video was unrelated to his current business.

He clarified that Mat Western's business has been doing well, but he was having trouble in another entity.

He also clarified that he will not borrow money from unlicensed sources and he is even looking to expand the current business.

Umar also said he was emotional on camera as he was speaking about his mother who visited him in Singapore in April 2022.

It was previously reported when the stall first opened that it sold pizza and Western food that ranged from S$10 to S$15.

Most reviews on its Facebook page had praised Mat Western for its affordable yet good quality Western fare.

The stall was initially opened in February 2021 in a canteen at the Jurong Pier industrial area.

While business was good at the start, the lockdowns and two-pax restrictions reduced footfall to the stall during the pandemic.

In addition, the stall's distance from residential areas made delivery difficult.

But business initially improved after Mat Western moved from Jurong to Bedok North.