When the land borders between Singapore and Malaysia finally reopened, a Malaysian man had chosen to return to his hometown in Batu Pahat by bicycle.

40-year-old Mars Ong spent slightly over four hours on his bike, covering a distance of 134.8 kilometres.

According to his post caption, he quipped that the petrol prices have become "too expensive" and so he decided to cycle all the way up to Batu Pahat to save up on petrol costs.

He also added that cycling into Malaysia felt the same as pre-Covid time. All he needed to cross the border was his passport.

He also asked in the group if there are any like-minded "kakis" to join him next time.

Family did not know he was cycling back

According to China Press, Ong had begun his journey at around 7am and arrived at his destination at around 1pm.

Apparently, his family was expecting his return home that day but they were not privy to his chosen mode of transport.

Upon realising he had cycled all the way from Singapore, they found his action "too crazy".

While Ong was clearing immigration at the motorcycle lane, a Malaysian immigration officer walked into frame.

When Ong candidly shared that he was on his way home to Batu Pahat, the officer was visibly shock at Ong's choice of transport and pointed incredulously at his bicycle.

Around five-hour journey including breaks

Including the breaks that Ong took along the way, the whole journey from Singapore to Batu Pahat actually took over five hours.

He had stopped at Pontian for a meal as well as made several pitstops to rest and rehydrate.

Ong also bought some fried carrot cake back home for his wife.

Travelling by bicycle (or even by foot) between Singapore and Malaysia is not that uncommon, especially if your destination is Johor Bahru.

However, Ong's destination at Batu Pahat is further up north of Johor Bahru.

According to Ong's screenshot on activity tracking app Strava, he spent 4 hours, 19 minutes and 42 seconds on the bike, covering the distance of 134.8 kilometres to his home.

The avid cyclist is no stranger to cycling long distances while clocking impressive timings.

Ong told China Press he had previously cycled into Singapore but typically returned to Malaysia by car.

Unsurprisingly, Ong has been cycling for six years and often participated in cycling events and competitions before the pandemic.

He said he had cycled a similar length of distance within Singapore once, which might explain his confidence in making the journey across the Causeway.

Even when the pandemic hit, he continued cycling during his time in Singapore.

In consideration of safety concerns, Ong will not return to Singapore completely by bicycle. Instead, his wife will drive him to Johor where he continue the rest of his journey to Singapore via bicycle, he said.

Ong also said he will still attempt to travel from Singapore to Batu Pahat by bicycle in the future.

While such a journey can be a memorable experience for the rider, Ong cautioned that one should not try without having ample cycling experience and physical stamina.

He added that there are some risks involved as cyclists may encounter sudden dangerous situations during the journey such as a flat tyre, cramps, etc.

Hence, he had to constantly monitor the bicycle's condition during the journey and remain alert on the road.

He also developed a tan from his cycling trip.

Many netizens left comments, expressing their awe and admiration for his accomplishment.

One person applauded Ong for his environmentally-friendly mode of transport that is "worthy of an award".

Someone even lamented that the drive to Batu Pahat by car was tiring enough, let alone cycling, and felt that what Ong did was "very impressive".

Ong's journey has also seemed to inspire a number of netizens who expressed their interest in travelling to Malaysia by bicycle.

However, someone pointed out that Ong was a seasoned cyclist who was averaging a speed of 31.1 kilometres per hour based on his Strava screenshot.

He added that most people do not typically ride beyond 25 kilometres per hour and advised everyone to cycle within their limits. 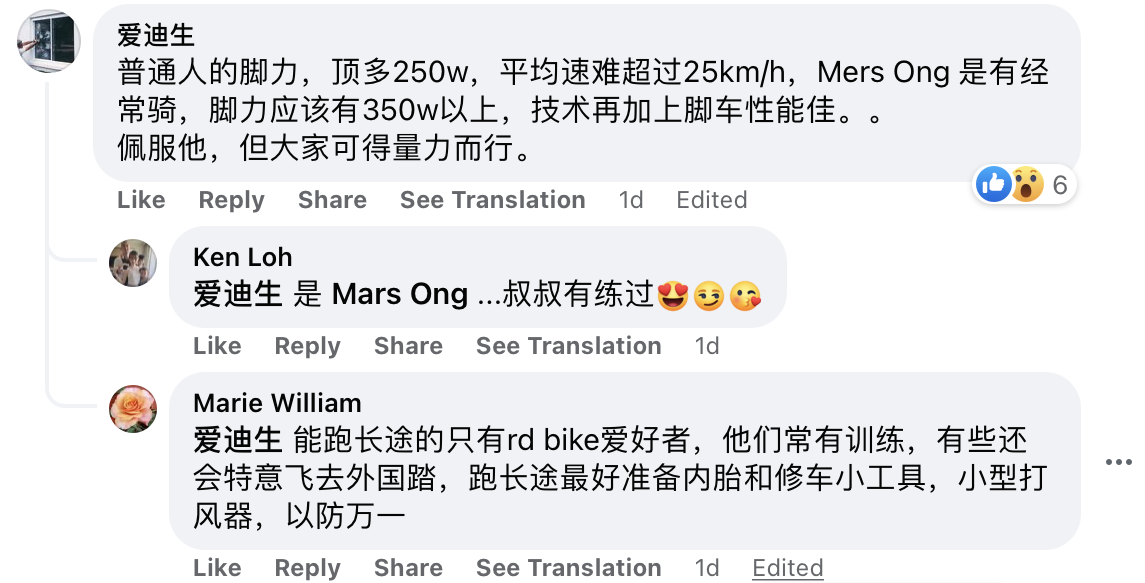