The critics of Ah Girls Go Army have spoken and the supporters have parted ways with their money by turning up in droves at the cinemas.

And if you were to ask which side is overcoming the other, it is definitely the side that puts the money where their mouth is -- at least according to Singaporean actor Tosh Zhang.

In a celebratory Facebook post on Feb. 3, Zhang hailed the news about Ah Girls Go Army making S$1.15 million in a matter of days as how "the silent supporters will always be even louder eventually by going to the cinemas and buying tickets".

AH GIRLS GO ARMY has just broken the SGD$1 million mark at the box office within a few days of release. What does this show? The haters might seem very loud online with their disdain for the film and saying it will be an absolute box office flop, but time and time again since ABTM 1 the silent supporters will always be even louder eventually by going to the cinemas and buying tickets to show their love & support. I’m immensely proud of the AGGA cast, it has not been easy for them facing so much negativity online but results and numbers don’t lie. Congratulations! 💪

And these comments are considered tame because he was airing them on Facebook, which is officially boomer town, according to Wall Street.

Over on Instagram, Zhang was even more emphatic and caustic -- that is possible as Instagram users are younger and more funky ass -- as he shared a screen shot of his Facebook post and turned on the potatoes gonna potate firepower.

And what are the haters gonna say now? As usual, they will say SG audiences are low class and have no taste. But you know who are the truly low class ones? Y’all loser ass haters spouting negativity constantly and putting people down. Understand this - what you say about others says more about you than it says about them. Stay salty and keep the mediocre hate coming while the franchise continues to be a success a decade on. #AhGirlsGoArmy 💪

And in Zhang's Instagram post's comments section, responses from those associated with the Ah Boys To Men franchise cheered him on. 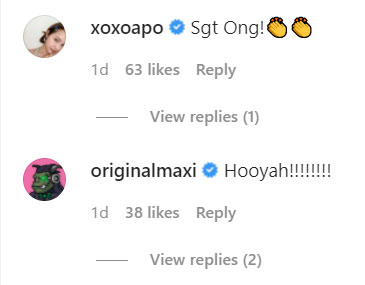 One regular folk, however, did reply to Zhang to give him a peace of their mind: 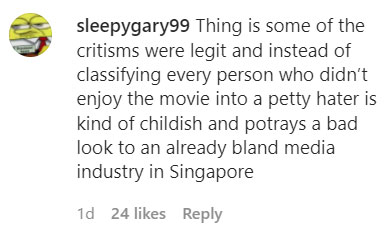 Legit constructive criticism is definitely alright and needed for the media industry to improve. It is not realistic to expect every single person to enjoy the film as everyone’s tastes are different. I am referring only to those who are unnecessarily mean spirited and put others down for no good reason. 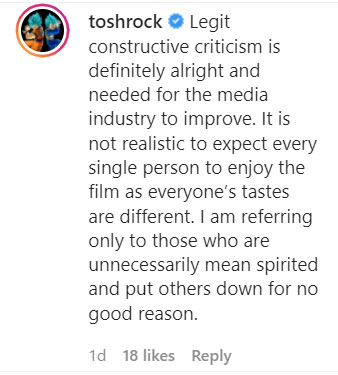 Since Ah Girls Go Army was released on Feb. 1, buzz online has ensured both haters and supporters got to air their views, with the Ministry of Defence even chiming in.

Cast of the new movie have been celebrating its release.

The first four Ah Boys To Men movies, after the first one came out in November 2012, have so far grossed over S$26.8 million in theatres, making it one of the most lucrative movie series in Singapore's history