On  Jan. 11, Lee Jinglei kicked off Season 2 of her saga with more allegations against ex-husband Wang Leehom.

Wang has since responded to her allegations, to which Lee has speedily replied on the same day (Jan. 12).

But she's not done yet.

In her first post, she accused of Wang hiring keyboard warriors to spread pictures of his gifts and balloons outside her residence with their children.

Her post is accompanied by invoices of past purchases of social media likes and comments.

Her second post, which is only available on Weibo, addressed Wang's lawyer letter and questioned if the lawyers had advised him to breach the divorce agreement.

Two pictures of balloons and other gifts that Wang had allegedly left outside his home for his children began circulating on Weibo on the night of Jan. 12.

These pictures were accompanied by netizen comments that sympathise with Wang, painting him as a loving father who wanted to surprise his children but was unable to meet them.

Netizens have matched the pictures with the one that Lee shared earlier of the residence's corridor.

On Jan. 13, Lee responded to these photographs in a Weibo post. 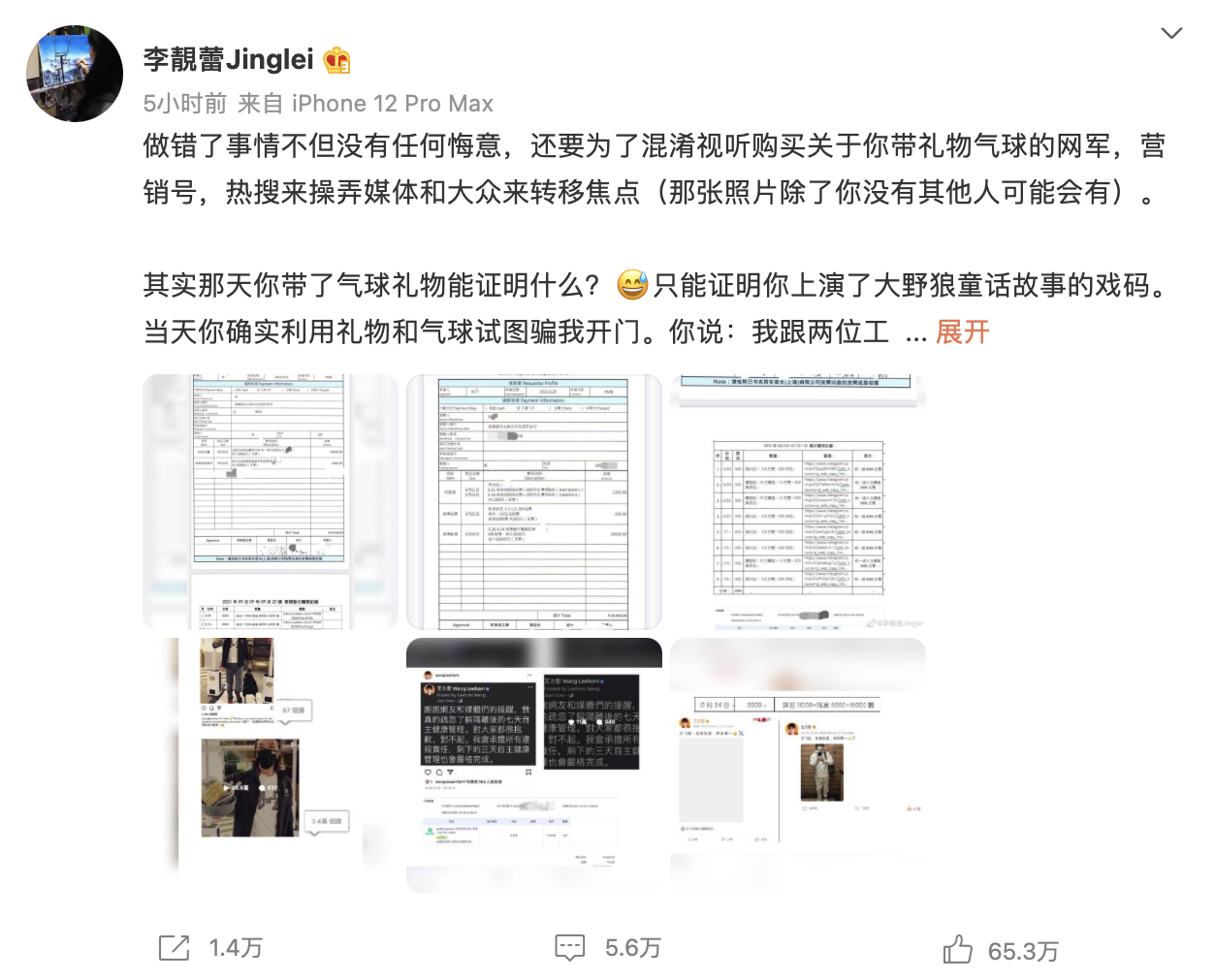 She accused Wang of "buying keyboard warriors, commercial social media accounts, and popular searches" to spread the pictures of the gifts that he had left outside the unit.

He did so to manipulate the media and public and divert the focus, she argued.

The post came attached with invoices from June and September 2021, indicating purchases of likes and comments on social media.

Here is the full translation of her script:

"No remorse whatsoever even after making mistakes, you still want to create confusion by buying keyboard warriors, commercial social media accounts, and popular searches, to post about the gifts you brought to manipulate the media and public and divert the focus (besides you, it is not possible for anyone else to have that picture).

What can the fact that you brought balloons and gifts with you that day prove? 😅 It can only prove that you were staging a "Big Bad Wolf" fairytale drama.

Indeed, you used gifts and balloons that day to try to trick me into opening the door. You said, my two staff members and I have brought lots of gifts, and the doorbell's surveillance camera was blocked by your balloons.

You repeated your words, we have brought gifts, disconnect the surveillance cameras and let us enter, and emphasised that other than the two staff members whom I have not consented to, there was really no one else around, just us bearing gifts (in the end, there was another man hiding at the back).

The attached images are evidence of your long-term purchase of keyboard warriors, the invoice bears the signatures of your various employees.

It also contains the remittance account information and proof of purchase, the final review and payment are done by yourself so please do not push it onto the employees.

Life is very long, all I want is for you to behave normally as an ex-husband and the children's father, and let us live our lives healthily."

However, some netizens, including Taiwanese host Chen Yee, have pointed out that these invoices are from June and September 2021, which was before the saga started.

She implied that buying keyboard warriors was nothing new to celebrities and if Lee wanted to give proof, it should be invoices that are dated after her nine-page exposé blew up in mid-December 2021.

According to Apple Daily, Wang's agency has shared a letter in both English and Chinese from the law firm that is representing him on Jan. 13.

In its letter, the law firm advises that "under no circumstances should he (Wang) be alone with his ex-wife Lee Jinglei without another adult approved by us (the law firm)".

It also accuses Lee of turning the divorce into a "false, fabricated, and malicious smear campaign" that endangers both Wang and the children.

The letter ends with a line, saying that Wang is focused on trying to meet his children "without interference."

Ever quick in her replies, Lee has responded to the lawyer's letter within hours on Jan. 13 via Weibo.

According to Lee, the divorce agreement that she and Wang have signed states that:

The 35-year-old proceeded to interrogate the law firm representing Wang if they had also advised him to breach their agreement, and make her feel threatened as well as startle the children.

Here is the full translation of her Weibo post:

"Addressing Wang Leehom's lawyer statement, my reply is as follows:

The divorce agreement signed by the both of us states: both parties agree that before our youngest child turns 21 years old, Wujiang is where I live alone with the three children.

May I ask if 'this law firm' has advised Wang to breach our agreement by bringing along visitors who have not received consent, and even hiding a man whom I do not recognise nor was mentioned by you?

May I ask if  'this law firm' has also advised Wang to ignore my clear responses to his behaviour to make me to feel threatened concerned about my safety, while trying to barge into the residence without consent and startling the children?

May I ask if 'this law firm' received money to write this letter without knowing the objective facts about what happened..."