Entertainer and livestreamer Wang Lei is taking umbrage at how an interview he gave to a newspaper seems to have translated into a story on an unrelated topic.

Wang said that the focus of the interview he gave was totally different from what eventually made it to the newspaper's front page, and identified the offending article as a Shin Min Daily News (SMDN) report.

He showed the Chinese daily's e-paper in a Facebook livestream on Dec. 27. 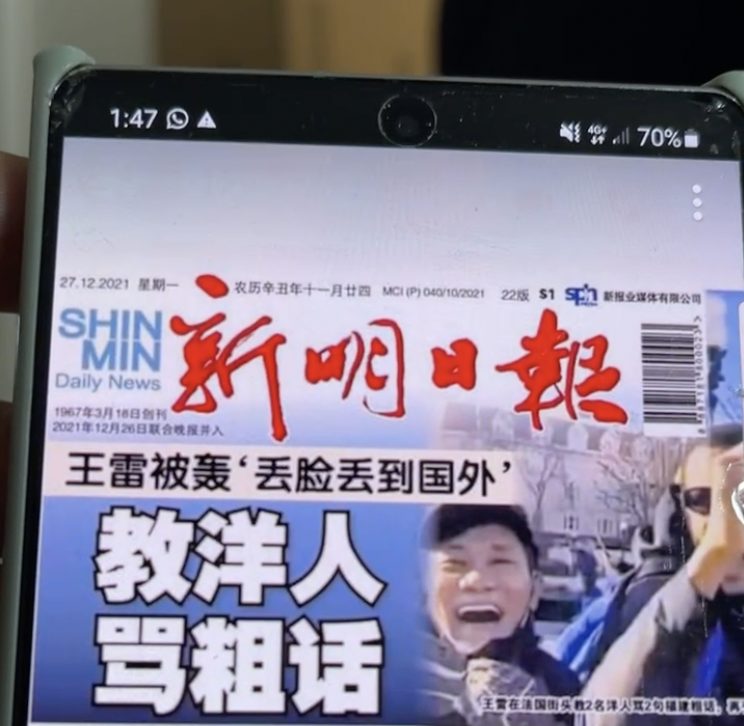 Wang took issue with how the headline focused on him teaching vulgarities to westerners, even though he had been interviewed on topics such as his fundraising efforts for flood relief in Malaysia, and his hopes for the new year.

"What am I angry about? It's the feeling of being betrayed," Wang said, saying he had evidence of his correspondence with the journalist but was holding back on publishing it.

The paper had quoted a comment about Wang that said he was "losing face, even overseas".

Wang questioned the newspaper's decision to amplify the sentiments of one person, saying that praise for his achievements and good deeds had never been highlighted in the news.

Wang highlighted his efforts to represent Singapore, such as fundraising for flood relief in Malaysia, and selling over S$1 million of products via livestream.

He challenged anyone who took the view that he had caused Singapore to lose face, saying:

Wang said that his use of vulgarities should have nothing to do with Singapore's image, and that his choice to teach vulgarities to foreigners was his own personal matter.

He added that any Singaporean who felt that he was lowering Singapore's image should emigrate.

Did not only teach vulgarities

He then addressed a viral incident where he was filmed teaching passers-by Singapore slang, including some choice phrases in Hokkien.

Wang explained that his group had not set out specifically to teach others vulgarities.

"We just did it for laughs, we were joking around," he said, explaining that the passers-by had seen them singing a song, and joined in by mimicking them.

Wang said that as everyone was in a happy mood, he decided to teach them the phrase "heng ong huat", a saying that means "luck, prosperity, good fortune" in Hokkien.

He explained that he then went on to teach them how to say the vulgar words as his mouth was "itchy", but stressed that he had also taught them to say other phrases prior.

"Why focus on those [vulgarities] to attack me?" Wang asked.

Wang then brought up incidents over the past months where he felt he was targeted by journalists, saying that he has yet to be impacted by such reporting, thanks to his supporters.

"Do you know who are my supporters? It's the netizens who follow and cheer me on. I don't have any boss, my 'bosses' are these netizens."

Wang also defended his frequent use of vulgar language, saying: "Out of the millions of people in Singapore, are you saying that none of them has ever used vulgar language?"

"I know some of you reporters are watching this. Don't cook up something for the sake of it. To go against your own conscience like this, it's worse than raping and robbing."

The livestreamer then said that he has been "attacked" for two years, as all the news about him has apparently been negative.

You can watch the recording of Wang's livestream here:

In the midst of his Europe trip, Wang has been posting regular updates on his Facebook page about his support for flood relief in Malaysia.

In a Dec. 23 update, he thanked contributors, and said that the thousands of dollars he raised did not come from businessmen.

Rather, it was thanks to donations from individuals, in amounts ranging from S$5 to S$1,000.

Top image screenshot via video by Aaron Lake on Facebook