In the second part of her series of clapbacks towards Taiwanese-American singer Wang Leehom, Lee Jinglei has doubled down on her claims, and reiterated her wish for Wang to clarify his accusations.

This was after Wang's first statement (which was well past the Dec. 19, 3pm deadline that Lee set) denying that he had any affairs outside of his marriage with Lee, and claiming that he had always lived in fear of Lee.

She started her response by calling Wang out for trying to gaslight her (as she claimed their psychiatrist had pointed out) by using certain false or misleading charges.

She thus has to turn spend time and energy to defend herself against these charges, leading to a shift in focus from the real issue at hand.

Lee then listed the claims that she felt require an adequate response from him, as he's a public figure who has obtained much support and tangible benefits from people using the image that he had crafted.

Here are her claims:

1. About Wang's solicitation of prostitutes

"There are now so many eye-witnesses and evidence circulating online that point towards your habit of calling for hookers. Regarding this issue, do you or do you not admit to it?

For instance, do you admit that before you got married, you engaged the services of a Korean hooker who was wearing fish nets, and that the security guard said you regularly invite different girls to your home, as well as other deeds such as calling for hookers at hotels in the U.S. and also in Malaysia?"

2. About his string of affairs

"Do you admit to the fact that even before you got married, you've had many 'friends with benefits', and even cheated on your partners?

For instance, in 2012 and 2013, were you dating both me and Miss Sun? Have you also brought a model home to spend the night with? Have you tried to be 'friends' with a junior who was only 16 years old at the time?"

3. Regarding his moral standards

"Regarding you and your family's treatment of me as if I was a baby-making machine, as well as the humiliation, torment, and emotional abuse you've inflicted on me over the long term. According to your account, even when you didn't love me and were living in fear of me, you still wanted me to give birth to your second and third children?

And after I popped out our third child, you resorted to all sorts of tactics to threaten me to agree to a divorce, is this the sort of moral standards you've been living by?"

4. About him missing his children's birthdays and other important days

"In your statement, you called for me to 'please' let you see the kids in an attempt to muddy up the points and fool those who are following this. May I ask if there ever was a time when I didn't let you see the kids? The fact is that not only have I welcomed and encouraged you to come see them, I've also agreed to let you install a camera at home so you could monitor what's happening.

This was until recently when I asked if you could only monitor the house through the camera when you're alone, otherwise I would feel as if I was the star of a reality TV, where everything I do in the private of my home could be seen at any time by your friends or your colleagues.

I told you that this has caused me tremendous stress to my mental health, and hoped that you could cease (monitoring the house when others are around). You said you would try, and I asked you to stop as this is a form of 'mental abuse' that makes me feel extremely uncomfortable. But you selfishly said that you would try, but could not guarantee it.

Is the above factual or not?"

5. Regarding his claim that Lee is refusing to speak to him

Lee also asked if Wang's claim that he could only speak to her through a public plea was true, and asked him to respond specifically to a recent example.

"I tried to make contact with you for the whole of yesterday, but you didn't pick up my call. Just in the afternoon yesterday, I called you a total of five times, and even texted you to ask for a call, but you've rejected them all.

Later you said you're only willing to talk with me if a person you appoint is in the call too, I agreed to it. I then spoke to the person on the phone, but even so, you refused to speak with me. May I ask if you're going to apologise for the bunch of lies that you've uttered?"

To substantiate her claim, Lee also provided a screenshot of a series of calls she made to Wang that appeared to be rejected or unanswered. 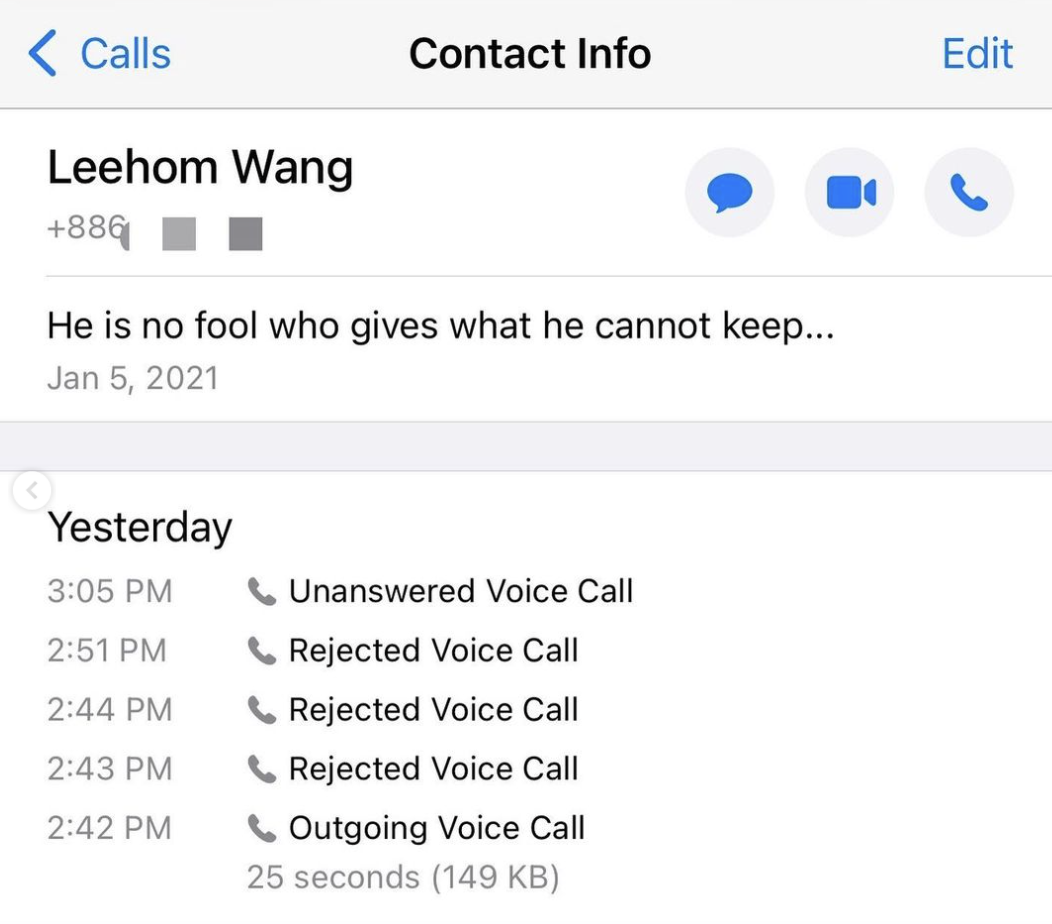 Regarding his use of her Japanese name

Lee also addressed the issue of Wang referring to her by her Japanese name in his statement, instead of her Chinese name, saying that this move shows that he is of "poor character" and someone who lacks "culture".

"You hope that (by referring to me by my Japanese name) you could trigger hatred (towards the Japanese) among netizens in order to control the tide of discussions online, but you've underestimated the intelligence of these people.

My Chinese name is Lee Jinglei. I've used the Japanese name when I was young, but I later decided to discard it as the place I was raised has no connection to Japan. My father had also left our family and this brings me some bad memories. I was born and raised in Taipei, and I thought my Chinese name better represents me as a person, this was my choice and something that hurts me. You're clearly aware of this, but you ignored my feelings and used such an underhanded way to hurt me.

This has gotten rid of any remaining respect I had for you."

Lee ended her letter by saying she hopes Wang can "face up to himself and his problems with honesty", and take responsibility for his actions "without attributing the problems to others or using various tactics to divert attention from the key issues so he can make a clean withdrawal from the matter".

She said she hopes this matter can come to a close quickly, "I hope I'm not forced to write another response because of your untrue allegations or refusal to own up to your mistakes."

Social media users in both Taiwan and China continued to express their support for Lee, as they always have.

"The God of Lei (Thunder) has come with her hammer."

"Can you publish a book in the future? It will definitely sell."

Chinese Weibo users also told her that her identity as a half Japanese and half Chinese doesn't mean they will stop rooting for her, as they said they will always stand on the side of reason.

"Damn, he's (Wang) really not giving up unless it's too late!"

"Let's not even talk about your Japanese (identity), even if you're a martian from space, we'll still support you."

"Don't mind the negative voices, and don't say you don't want money, even if you want it, it's what you deserve, no? Don't tell me you want his autograph?"

"Sis really was well-educated! Logical, cultured, independent in her thinking, and full of depth."

Shortly after Lee posted her response, Wang announced that he will be taking a break from work.

Congratulations! You have made it to the end of this (admittedly juicy) article. This alone qualifies you to apply for the role of a Lifestyle & Entertainment writer at Mothership. Click here to find out more.