Station Inspector Abdul Hakim, 33, has been in the Singapore Police Force for 11 years.

And in that time, he has had his experience of hot pursuits as part of the Traffic Police -- but the latest incident was caught on camera and shared widely online.

On Oct. 28, at around 9:50am, the veteran police officer was called to action once again.

He was one of the two Traffic Police officers involved in an incident at Geylang East Central that morning, where a Mitsubishi Lancer purportedly reversed and struck Hakim's colleague before fleeing the scene during a hot pursuit.

The officer who was struck, Senior Staff Sergeant Haidil Bin Osman, 37, sustained minor injuries to his hands and legs after he had to jump off his motorcycle as it made contact with the car driven by the suspect.

He has been given three days of medical leave as a result of his injuries.

In the end, three men -- the 37-year-old driver, 34-year-old passenger, and another 22-year-old man who rented out the vehicle -- were arrested.

In his own words

Speaking to the media on Oct. 29, Hakim related what happened that day during the pursuit, as well as what he goes through as a Traffic Police officer.

Here's what he said, in his own words, edited and condensed for clarity. 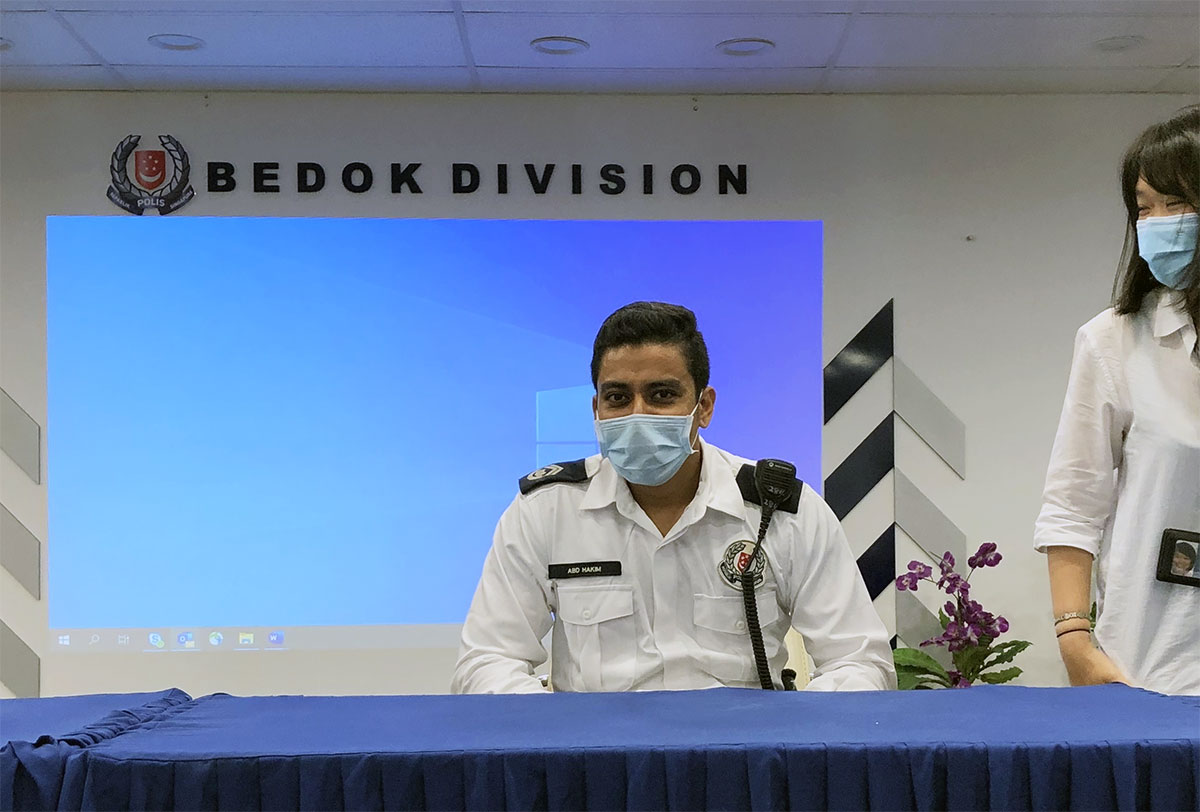 "So, while I was along Upper Paya Lebar Road, I saw this car. Initially it was going fast, but when I reached him, he was slowing down."

"So, there were some telltale signs and the driver was sort of looking straight all the way."

"So I stopped him for a check."

Took off when TP approached

"Initially, he stopped, and when I tried to get off my bike and approach him, he sped up. That's when I informed my side that a pursuit is ongoing."

"Then he made me go round Upper Paya Lebar, Hougang, Bartley Road East, and a few roads, and then he went into MacPherson Road."

"There was a collision with another car at that location."

"He did not stop and then he proceeded to Aljunied Road, subsequently to Geylang East Central."

"Once he went to Geylang East Central, that's where I saw my colleague behind me, Senior Staff Sergeant Haidil."

"And then the driver made a right turn to Geylang East Avenue 1."

"That was when the accident happened, when the car reversed and hit my colleague."

Made a run for it again

"Subsequently, he made a three-point turn and went straight to Aljunied Crescent and he made me go round circles again."

"Then I managed to stop him at Geylang East Central again."

"And when I reached the location with another colleague of mine, the driver had already fled, leaving behind the passenger."

"Then my colleague had to take some necessary force on the passenger to bring him down and secure him."

What are some things TP officers do in a pursuit?

"In my 11 years as a Traffic Police, I have been in a few pursuits."

"If the criminals or drivers are desperate to run, because they want to evade the police, they will do anything."

"Definitely there was some adrenaline rush involved, but I managed to inform my location and whereabouts to other team mates who came as fast as they could."

"The moment the driver sped off, I knew from instinct he was trying to escape."

"The first thing I caught was the vehicle number."

"That's the most important detail in any pursuit."

"There are some instances where the driver was on the extreme right or left side, and when nearing an exit, he just suddenly cut to the extreme, which make me react accordingly."

"With my experience, I realised that he was trying to do that so I kept a safe distance and make sure I was not behind him, but to the side, so that if he jammed the brakes, I won't be behind."

How to ensure public safety during a pursuit?

"I'll switch on my vehicle lights and siren to let people know an emergency vehicle is passing by and something is ongoing and to be aware.

"What caught my attention was the telltale signs based on how he was driving, which gave me a gut feeling that there's something wrong, so I need to stop him for a check."

"Because I initially didn't see any offences or whatsoever."

"Before the pursuit started he was driving normally."

What happened when the TP officer was purportedly struck by the car?

"When I made the U-turn after I overtook the car, I checked on my colleague and he could still move and I could remember he gave me a thumbs up."

"So, I just pursued the driver."

"If I saw him in a position that is different, I would have helped him."

What did the videos online not show?

"There is actually a pedestrian crossing in front of the camera car."

"So, there was a lady crossing so I stopped in front, and asked her to move fast in case the Mitsubishi Lancer rammed the cam car."

TP officers and their job

"When my mother saw the video, she called me, 'Are you the person, you are the one working in the morning, right?'"

"I said: 'I was the one in front, it was my colleague who was injured."

"She said: 'Hopefully your colleague is okay.'"

All photos by Fiona Tan