On Oct. 9, the Multi-Ministry Taskforce announced that from Oct. 13, unvaccinated individuals would no longer be allowed to enter malls, or dine-in at hawker centres and coffeeshops.

On Oct. 10, the authorities announced a one-week "grace period" until Oct. 19 before the measures kick in for shopping malls..

In his speech on Oct. 9, Prime Minister Lee Hsien Loong explained the effectiveness of vaccines in preventing deaths and serious illness from Covid-19:

“Our data, as well as data from around the world, clearly show that vaccination sharply reduces the risk of serious illness. The vast majority of local cases (more than 98 per cent) have mild or no symptoms. Only 2 per cent or less developed more serious illness.

Of these, 0.2 per cent died or needed ICU treatment – just two out of every thousand cases. The rest of the serious cases have needed oxygen supplementation for a few days.”

With 15 per cent of Singapore's population yet to receive one dose of a Covid-19 vaccine (as of Oct. 6), some unvaccinated individuals have formed a community via Telegram groups.

These groups often contain unverified rumours and misinformation about Covid-19 and vaccines.

They have also facilitated the sales of ivermectin from overseas, an anti-parasite drug that some sceptics promote as a Covid-19 treatment.

The Health Sciences Authority (HSA) in Singapore said that ivermectin is not approved to be used to prevent or treat Covid-19, and that it will take strong enforcement action against those who illegally sell and supply it. In Singapore, Ivermectin is only approved for the treatment of parasitic worm infections.

On Oct. 4, members of one such Telegram group cast doubt on a woman's claim that her mother was hospitalised due to self-medicating on ivermectin.

One of the largest groups had about 9,000 members before Oct. 9.

According to the administrators of the group, it is a "truth-seeking, info-gathering group", and anything posted in the group is "open to critical analysis and civilised debate".

The members of the group largely appear to be sceptics, with few, if any, stating that they are medically ineligible for a Covid-19 vaccine.

Following the announcement of the new restrictions, the group gained at least 2,000 members in the span of less than a day.

The group experienced an uptick in activity, and many messages were deleted less than a minute after posting - presumably by the moderators.

In response to the new measures, many messages reflected a strong aversion, with some calling the government "evil". One person wanted to know where he could "protest" the measures. 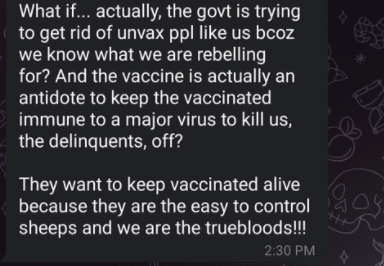 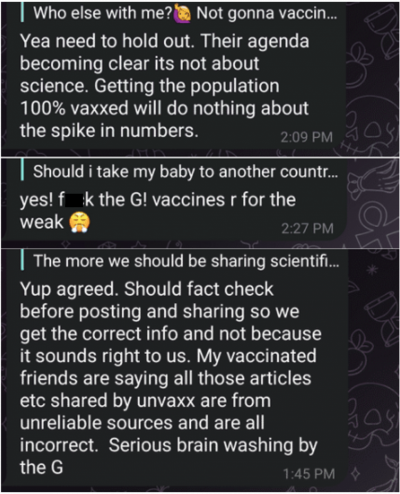 One message also encouraged unvaccinated individuals to "go out as much as possible" before the restrictions begin. Photo from a Mothership contributor

Self-proclaimed 'discrimination' against the unvaccinated

Several group members felt that this move by the government represented "discrimination". 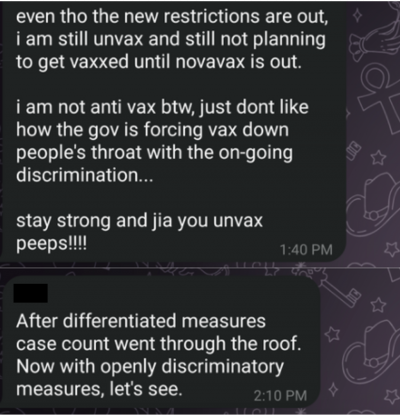 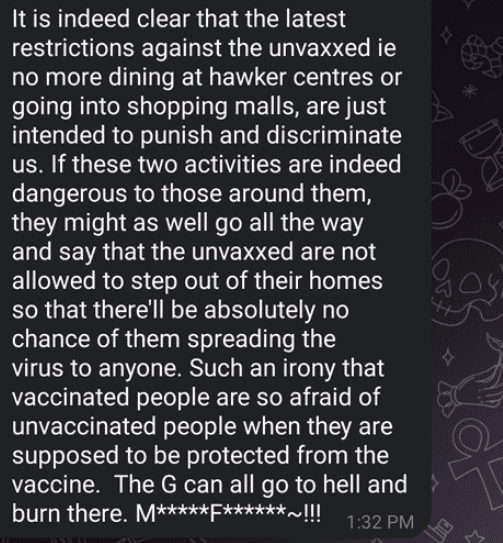 One unvaccinated member said that the measures are "worse than racism". With over 11,000 members, some unvaccinated individuals are turning to each other for emotional support. 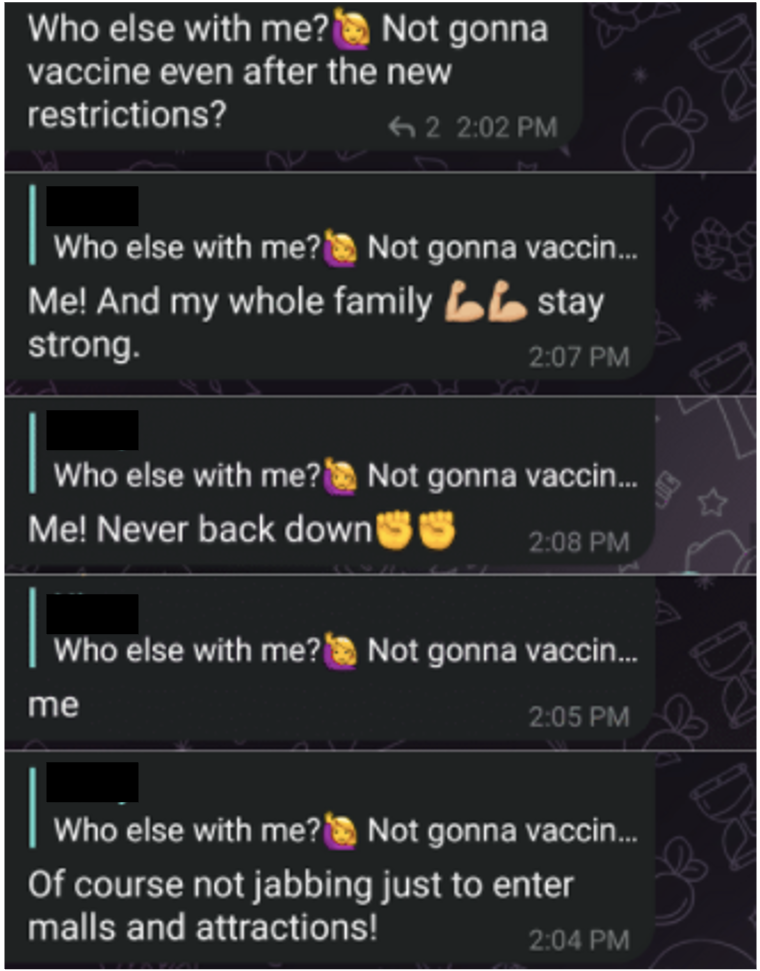 Perhaps inevitably, some of the 11,000 were newcomers who signed up with the group to poke fun at them. Photo from a Mothership contributor

Some of their messages were swiftly deleted.

To combat the wave of misinformation, some tech companies are stepping up.

YouTube recently took action to stem the flow of anti-vaccine misinformation, with all false information about approved vaccines (not just Covid-19 vaccines) to be removed from the site, according to NPR.

Since March this year, Twitter has also taken action by attaching labels and maintaining a strike policy against accounts spreading misinformation.

Top image by Ministry of Communications and Information and a Mothership contributor.