People in Singapore are trying to buy anti-parasite drug ivermectin to protect themselves against catching Covid-19.

And they are doing so by organising their bulk buying activities on Telegram. 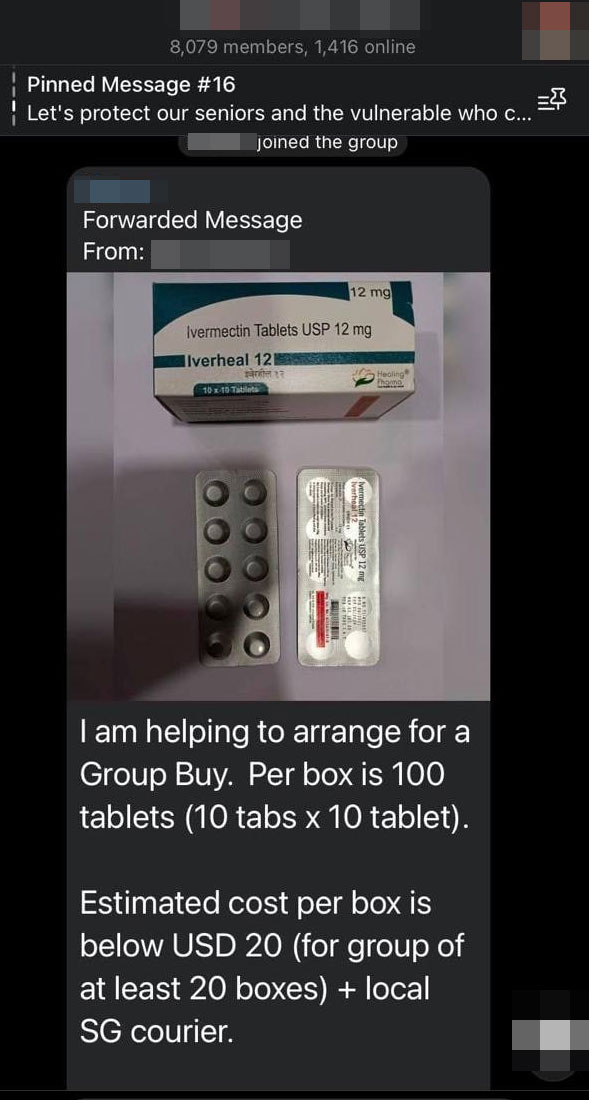 The drug, typically used on dogs and horses in larger quantities to treat heartworm, can be used to treat parasitic head lice in humans in small dosages.

Ivermectin can be bought online and shipped from overseas, such as India and the United States.

The cost is also relatively low, and is even priced cheaper than paracetamol.

Why people in Singapore taking ivermectin

There are at least three Telegram chat groups with participants openly discussing ivermectin and consolidating orders to bring the drug into Singapore.

These chat groups are populated by mRNA vaccine doubters.

Those openly sceptical about mRNA vaccines in Singapore have said they don't trust getting jabbed as the approved shots were developed in too short a time.

They also explain that they gravitate towards ivermectin, a drug more frequently used to treat livestock, as there are versions fit for human consumption and have been made available to people since the 1980s.

The particular type of ivermectin sought by those who self-medicate here are meant for human consumption.

In Singapore, ivermectin can only be bought with a prescription and not over the counter.

Trend of taking ivermectin in U.S.

The trend of taking ivermectin despite its iffy purported health benefits have befuddled and infuriated health experts and doctors grappling with keeping Covid-19 under control.

Self-medicating with ivermectin has been widely reported in the U.S., despite medical professionals advising against it.

The Centers for Disease Control and Prevention (CDC) statistics indicate that prescriptions for ivermectin have risen from 3,600 per week prepandemic to 88,000 per week in August 2021.

The World Health Organisation (WHO) in March 2021 warned that evidence of ivermectin's effectiveness against the coronavirus was "inconclusive" as the drug has only been used in clinical trials.

Problems generally arise in the U.S. when people consume the version of ivermectin that is only fit for animals.

Ivermectin as effective as vitamin C

In April 2021, a team of clinician-scientists from the National University Health System (NUHS) released a study on Covid-19 preventative therapy done on more than 3,000 migrant workers in Singapore in May 2020, when the coronavirus outbreak in dormitories was at its peak.

Out of the 3,000 healthy migrant workers, 617 received ivermectin.

The study showed that ivermectin was not very effective in reducing the spread of Covid-19 in high transmission settings.

The study also did not find significant preventive benefits either.

No statistically significant differences in Covid-19 infection rates were observed between those who took vitamin C versus ivermectin.

In June 2021, the National Centre for Infectious Diseases (NCID) in Singapore stated that the use of ivermectin as a a treatment is “not recommended” because there is a “lack of robust data”.

The Health Sciences Authority (HSA) in Singapore said in response to media queries that ivermectin is not approved to be used to prevent or treat Covid-19, and that it will take strong enforcement action against those who illegally sell and supply it.

In Singapore, Ivermectin is only approved for the treatment of parasitic worm infections, HSA added.

Anyone convicted of the illegal sale of these medicines faces a penalty fine of up to S$50,000 and/ or jail for a period of up to two years under the Health Products Act.