Unless you’re a motorcyclist in Singapore (or like me, you often dream of being one), you may not have noticed that Sentosa has a ban on motorcycles.

If you head over to the “How to get to Sentosa” webpage, you might spot this in the fine print:

The long-standing ban on motorcycles has been a sore point for some members of the motorcycle community who bemoan the inconveniences and perceived discrimination for not being allowed into the island.

Questions about the ban were raised over the years but it seems that Sentosa remains unwilling to budge on its stance.

We take a closer look at why the ban exists and speak to motorcyclists about how they feel about not being allowed to ride into the island.

What does the ban entail?

Well, put simply, no motorcycles are allowed to enter the island.

Even those who work in Sentosa cannot ride motorcycles to work.

Enforcement of the motorcycle ban is quite unyielding as well.

Riders who were unaware of the ban have documented their experiences of being turned away unceremoniously at the Sentosa gantries when they tried to enter on their motorcycles.

One Richard Hosier tried to enter on his motorcycle to visit a friend in Sentosa Cove in 2007, and wrote an angry Straits Times (ST) forum letter about it.

After being refused entry, he wrote that he was “told to execute an illegal U-turn across a double white line in the face of plenty of oncoming traffic because [he] was not even allowed to ride to the roundabout across the bridge to exit legally.”

Other riders, such as Amos Koh, 32, co-founder of TRI333PLE, a motorcycle content platform, recounted different experiences, where they were allowed to briefly go past the gantries to exit the island legally.

What are the exceptions?

There are a few exceptions to the motorcycle ban.

These include emergency and essential services, Sentosa’s rangers (i.e. security team), and delivery riders who send packages to Sentosa Cove residents and businesses on the island.

These courier service riders have to present valid documentation (e.g. delivery orders) to gantry staff to be permitted entry into Sentosa.

Sentosa Cove residents are also allowed to ride their motorcycles into the island, if they own one.

But they can only ride between their homes and mainland Singapore, and within Sentosa Cove, and are not allowed to visit other areas of the island on their motorcycles.

In March 2021, Sentosa relaxed its ban to allow food delivery riders on motorcycles onto the island, likely due to the increased demand from those serving their Stay-Home Notices (SHN) in various hotels in Sentosa.

A Sentosa Development Corporation (SDC) spokesperson informed Mothership that it has since ceased this exception on Aug. 19, as Singapore "transitions towards Covid-19 resilience", presumably meaning that there are fewer guests serving SHNs in Sentosa.

While the motorcyclists I spoke to were aware of the ban, they are not entirely sure of the rationale behind it.

For one, there isn’t any clear information on Sentosa’s website about why this ban is enforced.

The letter, written in response to an earlier letter titled “A ban on motorcycles seems uncalled for”, suggested that safety was the chief reason for the ban.

“Sentosa's roads are relatively narrow and winding and flanked by trees. They are also often single lane in each direction and this creates blind spots for drivers.

Due to their small size, motorcycles are usually more vulnerable to accidents on such roads, especially when weather conditions are poor.

Motorcycles tend to pick up speed faster than other vehicles. Given the island speed limit of 40kmh, speeding vehicles could pose a danger to guests walking along or crossing the roads.

Motorcycles can also be easily manoeuvred into areas such as pedestrian pavements and buggy tracks where other vehicles cannot gain access, and compromise pedestrian safety.”

But there seems to be other reasons behind the ban as well.

An ST article from 2013 quoted David Goh, the Senior Divisional Director of Sentosa Leisure Management, explaining that the ban on motorcycles was to "further preserve the island's charm and tranquillity".

Preserving the island’s tranquillity seems to have been a priority for Sentosa since its earlier days.

Until Sentosa Gateway's official opening in 1992, the island could only be accessed via ferry and cable car. Since then, Sentosa has allowed various forms of transportion into the island resort — but cautiously.

However, motorcycles, along with lorries and heavy-duty vehicles, were still denied entry “to control traffic and preserve the island's tranquillity”, according to a 2001 Channel NewsAsia report.

Why revisit the ban?

In general, motorcyclists are disproportionately involved in more traffic accidents resulting in injury or death than any other motorist on the road.

But this is no reason to exclude them from the island.

Despite arguments about the single lane roads in Sentosa being unsafe for riders, most residential areas in Singapore also feature single lanes, with a speed limit of 50km/h unless otherwise stated.

The speed limit on Sentosa is 40km/h, and strictly enforced by speed cameras.

Supercars, PMDs, bicycles are allowed on the island

Certain contradictions in Sentosa's policies also arise when taking into account the other types of vehicles permitted into the island.

Bicycles and Personal Mobility Devices (PMDs) are allowed in Sentosa despite the numerous PMD accidents that occur on the mainland.

Bicycles and PMDs can also be manoeuvred onto pedestrian walkways — a concern that Sentosa has for banning motorcycles on the island.

If Sentosa is concerned about safety, should it not ban PMDs as well?

Cars have also gotten into their fair share of accidents in Sentosa, with a notable accident in 2018 involving a Lamborghini and two other vehicles which sent three people to the hospital.

The need to preserve the island’s “tranquility” also doesn’t translate to banning cars — especially supercars — with loud exhausts. Why not ban noisy cars as well?

What does the motorcycle community in Singapore think about the ban?

Apart from riders who work on the island, the motorcycle community seems relatively unbothered by the ban.

Farhan Abdullah, 32, who runs a YouTube channel on motorcycles, told Mothership that he doesn’t really care about it:

“The ban has been there for so long, that riders don’t really take issue with it. If it were an overnight change, then I’m sure riders would get worked up over it.”

But he also pointed out that within the community, it is not an uncommon sentiment that Sentosa is gatekeeping the island from motorcyclists:

"Aiya, Sentosa is an island resort right, and they want to maintain that 'touristy' kind of thing. They’re scared that if they bring motorcycles in, the walkways or the sidewalks may be flooded with [them], you know."

Farhan paused for a moment before giving his theory about why Sentosa is unwilling to budge:

"Hmm I don’t know if I should say this, it’s quite controversial, Sentosa is a “high-class” place la, and motorcycles are seen as the “poor man’s transport".

But when asked how he feels about this perceived discrimination, Farhan said that he has no issue with it.

“I don’t even care to visit Sentosa. People who generally go there are mostly tourists, and looking at the demographics, people who ride motorbikes tend to explore places where public transport isn’t accessible.

I would think that riders would have better places they would rather go.”

Fellow motorcyclist Amos Koh told Mothership that he would appreciate if Sentosa can provide clear reasons for the ban:

“Once in a while as a biker, I would wonder, why just the motorcycles? What is the real reason [behind the ban]?

You could say that it is dangerous for motorcycles to be on the island, but there are also a lot of fast-moving vehicles on the island.”

Yet, like Farhan, Koh does not mind the ban:

“Generally I can say that the majority of bikers in Singapore are quite easy-going people. So if we are told we can’t ride in, we’ll just find a place to park nearby and go in.

But of course, it will be quite an awesome experience to be allowed to ride into Sentosa.”

Despite their nonchalance about the ban, other motorcyclists have on occasion reached out to Sentosa to express their frustrations, or post heated comments on forums questioning the existence of the ban. 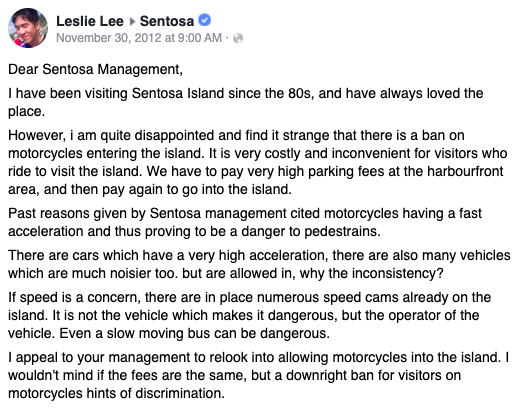 How have they accommodated the ban?

Both Farhan and Koh pointed out that riders would often park their bikes at the Seah Im or Marang Road carparks opposite Harbourfront MRT, and then take a shuttle bus or the monorail to enter the island.

Koh said that he would avoid the inconvenience altogether, and drive or take public transport into Sentosa.

Ilyazar Ilyas, 40, has been working at Sentosa as a security officer for three years, and hopes that Sentosa will give concessions to employees to allow them to ride their bikes to work.

Ilyazar said that being allowed to ride into the island would save him "a lot of time and hassle to get to work". He added that he would be glad to pay for a seasonal permit, if required.

He said that providing parking spaces for motorcycles shouldn't be a problem in Sentosa, as the motorcycle population here is small and manageable.

Will Sentosa revisit the ban?

When Mothership reached out to Sentosa for comment, a Sentosa Development Corporation spokesperson made no mention of any plans to review the ban, and instead reiterated Sentosa's focus on safety:

"Since the completion of the Sentosa Gateway in 1992, motorcycles have been restricted in Sentosa for safety reasons, except in certain circumstances. This is due to the natural terrain of the island, where some roads are narrow and winding with a single lane in each direction.

"We seek our guests’ understanding that these roads are shared with buses and heavy vehicles, which could place motorcycles in a vulnerable position around bends as they would be in the blind spot of other drivers.

"In addition, the restriction minimises the risk of motorcycles inadvertently entering areas such as pedestrian pavements, beach access roads, and cycling tracks, which would compromise the safety of guests."

"The safety and wellbeing of everyone in Sentosa are of utmost importance to us, and we seek the understanding and cooperation of our guests in ensuring Sentosa continues to be a safe and enjoyable experience for all."