A GrabFood delivery rider cut across three lanes along the super busy Pan Island Expressway towards Tuas, causing one motorcycle and two cars to brake hard to avoid a collision.

The incident, which took place on Friday, June 12, was caught on video and subsequently shared online.

The footage showed the food delivery rider on an electric bicycle making a dash for the right-most first lane when there was a slight opening.

However, the act of filtering right caught one motorcyclist by surprise, as the rider had to brake to give way. 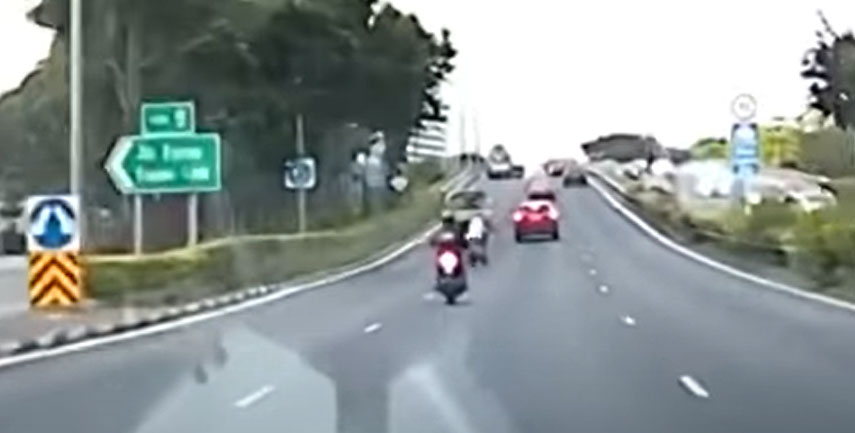 The more drastic defensive action was taken by two cars travelling on lane one.

Both cars directly behind the electric bicycle braked and filtered left to avoid hitting the delivery rider.

The video shot from the dashboard and rear cameras of a car on the middle lane showed the first car braking hard, followed by the car behind following suit, as both cars appeared to lurch forward as a result of applying the brakes suddenly.

How cyclist could have ended up on PIE

There are at least two ways the cyclist could have ended up on the PIE.

The first is via the Bedok North Road entrance onto the PIE, but this would mean the cyclist would have travelled about 2.5km along the expressway before riding past the Jalan Eunos exit and then cutting across three lanes.

Alternatively, the rider could have cycled against the flow of traffic along the Jalan Eunos exit and made a U-turn onto the PIE.

However, by sticking to the left-most lane, the cyclist would eventually reach another divider less than 1km away and get stuck there as vehicles enter the PIE via the Jalan Eunos entrance.

But by cycling on the right-most lane, the cyclist will not be able to exit the expressway, and will eventually have to filter back to the left-most lane to get out at one of the slip road exits.

No cycling on expressways allowed

As recent as November 2020, the Singapore police and Land Transport Authority put up a joint statement admonishing cyclists to stay away from expressways.

Cyclists are not permitted to ride their bicycles, including Power Assisted Bicycles, on expressways under Rule 3 of the Road Traffic (Expressway – Excluded Vehicles) Rules 2010.

Cyclists who are found riding on expressways may be liable for a fine not exceeding S$2,000 or imprisonment of up to six months.

The police and LTA said in their statement half a year ago: "The authorities will enforce against road users who choose to flout the traffic rules."

Previously, a cyclist was seen riding at night on a major expressway along the right-most lane and was almost run down.