Singaporeans were recently introduced to a song that is uncannily similar to the popular National Day song, "Count On Me, Singapore".

Both the Singaporean and Indian versions of the song share an identical melody, and near-identical lyrics, except for the countries mentioned in the song.

Instead of "Singapore", the Indian version mentions "India" or "Mother India" instead, and is titled, "We Can Achieve".

The owner of the copyright to "Count On Me, Singapore", Singapore's Ministry of Culture, Community and Youth (MCCY), said initially in a Facebook post that it was investigating potential copyright infringement by the creators of "unauthorised versions" of the 1986 song.

This prompted a response from one of the organisations that had published "We Can Achieve" as a music video, Pauline India, a publishing house that also runs an online shop selling Christian books and music.

Pauline India acknowledged "some copyright issues" in a Facebook post on Mar. 13, and explained that it purchased the copyright for the lyrics and music in 1999 from one Joey Mendoza, who claimed to own the copyright.

And now, Singapore's ownership of the song is being disputed by someone who goes by the name Joey Mendoza.

In his comment, Mendoza wrote: "I want to lay the fact clear that I've written the 'We Can Achieve' song".

While the original music video by Pauline India has been taken down, various re-uploaded versions can still be found online.

Mendoza listed himself as a former composer/ producer at Paisley Creative Studios.

He also stated in his Facebook profile that he studied at Musicians Institute, which is based in Hollywood California in the United States.

"Count On Me, Singapore" composer Hugh Harrison, however, countered that whoever wrote "We Can Achieve" would "have a hard time" producing evidence that he had indeed written the original song in 1983.

Harrison, who has so far publicly stayed clear of this issue online, gave his take in a reply to a comment on a YouTube video of the original 1986 TV version of the Singaporean song.

Harrison recounted how the lyrics and the melody of the song had evolved "over several months with input from both the government, the agency and the musical production team," adding that this process was "well-documented".

If the songwriting process, incorporating multiple parties' input, had resulted "exactly" in Mendoza's version, it would be a "wild coincidence", said Harrison, adding emphatically that "Count On Me, Singapore" did not exist prior to 1986.

Harrison also pointed out a subtle difference in the lyrics of both songs, and suggested that this could be due to the fact that Mendoza had made a mistake while transcribing the lyrics of "Count On Me, Singapore" when writing the Indian version.

The second verse of "Count On Me, Singapore" goes: "There is something down the road that we can strive for/ We are told no dreams too bold that we can't try for"

On the other hand, the Indian version, Harrison observed, has a line that reads, "We are told no dreams to hold that we can [strive] for". 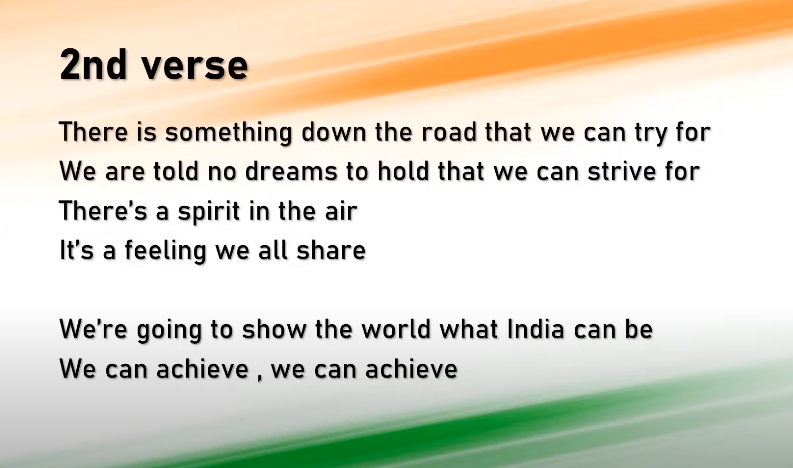 "What does that mean?", Harrison asked rhetorically.