The original 1986 song was composed by Hugh Harrison and sang by Clement Chow, and is widely recognised as one of the catchiest patriotic Singapore songs ever written to date.

With its highly sing-along-able tune, simple message and clear cut lyrics, the song has come to represent what locals feel Singapore was in simpler times.

However, the Count On Me Singapore song has apparently been plagiarised wholesale and turned into a song about India.

The major switcheroo in lyrics reads:

All mentions of "Singapore" were changed to "India".

The song title for this plagiarised version has also been changed to We Can Achieve.

Many versions of the plagiarised song exist on YouTube these days.

One of the most popular versions is a slick production of the song with accompanying lyrics in the video.

The comments section of this video on YouTube has been turned off.

There are also several videos of people doing their own renditions of the song.

These videos were uploaded online some time between July 2020 and January 2021 -- a recent phenomenon.

They all appear to be unaware or fail to acknowledge that the original version of the tune was written in and for Singapore.

Following the publication of this article, videos of renditions of the song have been taken down.

But some were reuploaded by others for posterity.

However, tracing the origins or the earliest version of the plagiarised song showed that it has been around for quite some time now.

One March 2016 video had a woman reading the song's lyrics to a child as a form of speech practice and learning tool.

And as it turns out, the most polished version of the song that was uploaded on YouTube on August 2020 was, in fact, put up online nine years ago.

Pauline Communications · We Can Achieve

The credits showed that the song has been attributed to one "Joey Mendoza" and the entity that put it up is known as Pauline Communications.

The song was apparently played back fewer than 7,000 times on Soundcloud, according to the stats provided.

How song gained traction these days

It is unclear how the song is making a splash again since the second half of 2020, with the reuploaded video on YouTube garnering more than 62,000 views as of March 11, 2021 after spending seven months online.

But reactions against the plagiarised version has been strong.

And when called out, one video uploader of a version of the song acknowledged her ignorance of the song's origins. 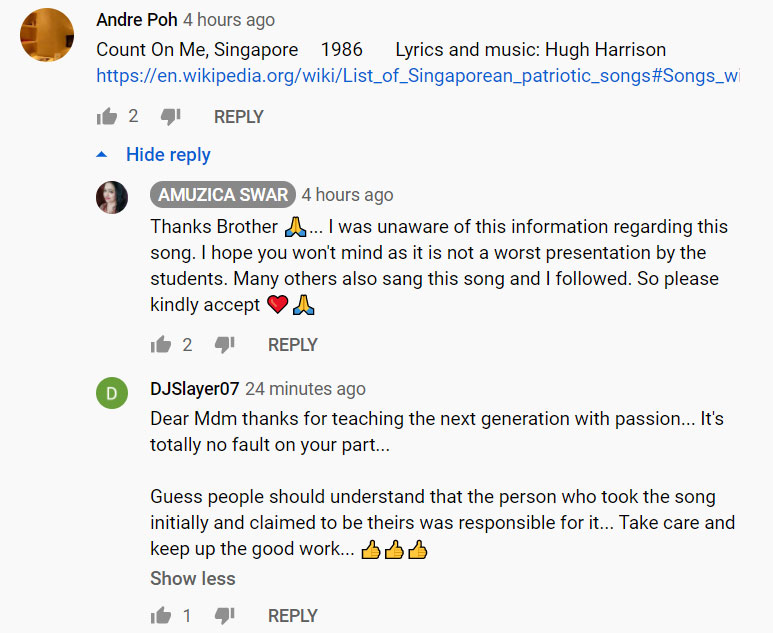 Background on Count On Me Singapore

The origins of Count On Me Singapore is well-known.

It was written in 1986, at a time Singapore was going through rapid economic growth and a sense of belonging was being fostered to keep the people together and remind them how far they have come since merger and separation with Malaysia.

The song is usually broadcast on radio and television starting from a month before National Day.

It is always played during the NDP.

There are many other popular patriotic Singapore songs, which also include Stand Up for Singapore (1985), and One People, One Nation, One Singapore (1990).