The clearance of Kranji woodland has sparked intense discussions over the balance between conservation and development.

This comes after the recent public debates over Dover forest and Clementi forest, which have caused Singaporeans to be concerned about the loss of green spaces that have rich biodiversity and important ecological functions.

The forested land at Kranji Road/Close, with the old rail corridor running through, was among plots of land earmarked for the development of the Agri-Food Innovation Park (AFIP).

JTC said on Feb. 16 that the contractor had "erroneously" cleared parts of the 70-hectare woodland and the agency is investigating what had led to this mistake and determining if the company should be penalised further.

So far, the construction company, Huationg Global Limited, has received a stern warning from the agency.

On Feb. 19, Huationg said in a press release that it is assisting JTC with investigations into the issue.

It also said that it had been issued with a stop-work order by JTC on Jan. 13.

Nature Society Singapore and other environmentalists were shocked that the clearance was done while environmental assessments were ongoing and the nature community was not consulted prior to that.

This has reignited calls for greater measures to ensure environmental and ecological values are well considered in development projects.

Several Members of Parliament (MPs) have spoken up on this matter via their social media pages and have filed questions for the next Parliament sitting.

Questions on the process leading to such an error

Hougang SMC MP Dennis Tan was among the first few politicians to voice out on this matter in public as he wrote a Facebook post on Feb. 16 to address this incident.

Some key questions that Tan asked, which those who follow this case will also wonder, include:

Yam also said on his Facebook post that he will ask more questions to ensure "proper explanation is provided" and that "any lapses that led to the unauthorised clearance be held to full account".

While there are some "regulatory teeth" in place with the current EIA framework, what happened at Kranji woodland shows more has to be done.

One of the two parliamentary questions that Ng has filed is whether MND will be strengthening the environmental impact assessment (EIA) framework further to ensure that such mistakes do not happen again?

Speaking to Mothership, Ng said, "I will push to codify the current EIA framework into an EIA law."

Ng who has been working closely with young environmentalists and is a strong advocate for the environment and wildlife told Mothership that there is "a sense of loss and anger" among people.

However, he urged those who care for the environment to "channel their energies positively" to ensure such mistakes will not repeat.

Ng mentioned that he previously amended the Wild Animals and Birds Act to include a new section to empower NParks to issue wildlife-related requirements as formal directions to developers and enables the board to take direct enforcement action against developers that fail to comply with the required measures.

Penalties for offenders can go up to a fine of S$50,000 or a jail term of up to six months, or both.

"But in this case, the new section was not used as works started before the studies were completed," Ng said.

On the same note, Tan will also be asking if MTI will make it compulsory for all development projects to conduct environmental assessments and public consultations.

"Lapses do occur and we need the necessary legal framework that can ensure that responsible parties are taken to task fairly and receive suitable punishment for any infringements. After all, any unnecessary clearance (if at all) of our precious limited forested areas may not be reversible. Is a stern warning sufficient "teeth" to undo anything or prevent further destruction?"

Other MPs who have filed questions

Besides these three MPs, other MPs who have filed parliamentary questions include MPs Leon Perera, He Ting Ru, Gerald Giam and Yip Hon Weng. 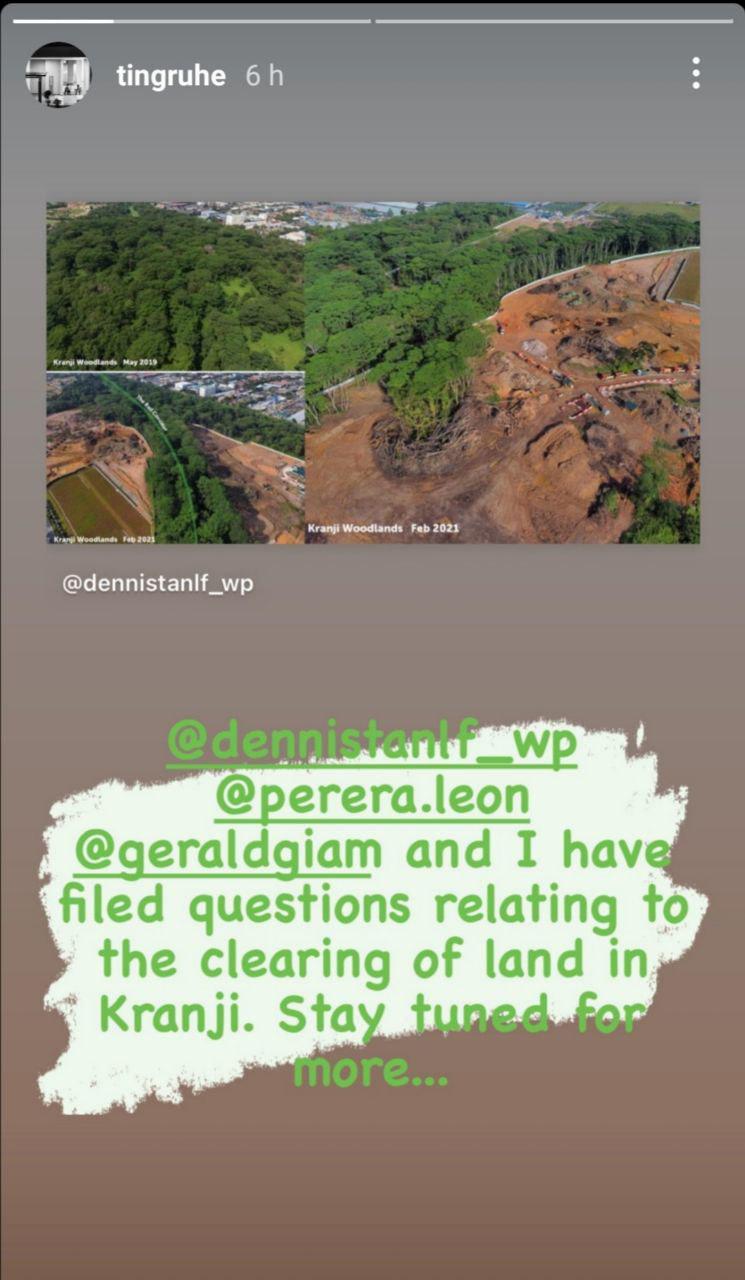 Editor's note: A previous version of the headline in this article stated that there is an erroneous clearance of the 70ha Kranji woodland. The article has been amended for clarity -- Over 10 per cent of the 70ha woodland has been cleared.