Besides Clementi forest, another piece of forested land is also slated for residential development.

The patch, which is south of the Clementi forest, is called the Dover forest. It is also known as the Ulu Pandan estate.

Unlike the Clementi forest, the Dover forest is likely to be replaced by new flats in the coming years.

Environmentalists in Singapore hope more people will look at the environmental baseline study and speak up for the forest.

Untouched for about 40 years

According to the environmental baseline study released by the Housing Development Board (HDB), the Dover forest was part of rubber plantation from the 1920s to the 1940s, and was abandoned after World War II.

Since the 1980s, the patch, with four freshwater streams, has been relatively untouched.

About half of the land area of the forest is made up of secondary forest that regrew from what used to be plantations or kampungs.

The patch is approximately 33 hectares (about the size of 46 soccer fields) and has a steep terrain of about 10m from Commonwealth Avenue West towards Ulu Pandan canal.

Here are some photos of the said Dover forest:

A precious and rare patch of wilderness: Dover resident

Yee Hui Tan, a Dover resident of six years, told Mothership that she would be very sad to lose this patch of green space.

Tan described the green space as "a precious and rare patch of wilderness".

She said that she appreciates the tranquillity, fresh air and interesting wildlife that can be sighted from the park connector due to the Dover forest.

She acknowledges that having this huge forest in the area a luxury but it is also what makes the neighbourhood as valuable as it is.

Another Dover resident Sydney Cheong told Mothership that after the late 1990s, changes in the estate were rampant with the development of condominiums, multi-storey car parks, and the Ghim Moh Link estate.

The long-time resident who moved to the estate 44 years ago said that when he runs or walks next to the forest, it has a "cooling effect" (especially on warm days).

The former science teacher has also seen an abundance of plants and animals, such as raptors, giant spiders, and wild flowers.

He said, "It is a loss to the natural heritage and biodiversity of Singapore if a forest of this statue is destroyed and cleared."

In a bid to save the forest, Cheong has since conducted surveys with residents and started an online petition to rally support. At least 35 residents living near the forest told Cheong that they want to keep the forest too.

Unprotected and designated for residential development

According to the Straits Times, HDB unveiled that it will be offering new flats in the Ulu Pandan estate this year.

HDB has also published an environmental baseline study on the Dover forest.

HDB said on its website that the study allows for the agency to "sensitively plan the land use and make adjustments to the Master Plan if needed to mitigate the potential impact".

The environment baseline study was conducted for the area as outlined in red below: 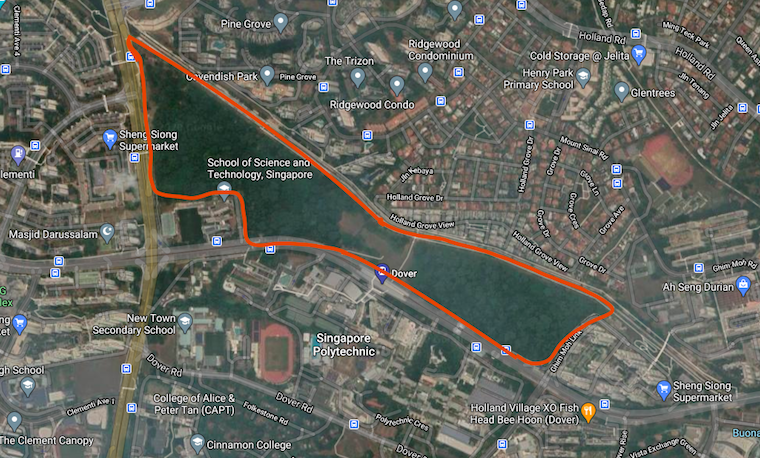 The study aims to provide information on the existing diversity and distribution of flora and fauna as well as to characterise the hydrologic conditions in the Dover forest.

A sanctuary for endangered wildlife

According to the environmental baseline study conducted in 2017 by HDB, 120 species of plants and 158 species of birds, mammals, reptiles, amphibians, fish, snails, and insects were observed in Dover Forest.

Here are some observations from the environmental baseline study:

Here are some wildlife that can be found in Dover forest:

An uncommon forest bird species, the Changeable Hawk Eagle, was also observed to have used the Dover forest as a nesting site:

The report also showed that the forest patch could be remediating rainwater (or naturally treating water) which eventually flows into Pandan Reservoir.

Furthermore, after the report was submitted in 2017, a critically-endangered bird species, the straw-headed bulbul was heard in the forest in December 2020, a final year Environmental Studies undergraduate at the National University of Singapore (NUS), Elliott James Ong told Mothership.

He shared that while naturalists did not capture a photo of the bird, they heard its distinct call in Dover forest.

If you are curious, this is what a straw-headed bulbul looks like (photo not taken at Dover forest):

Singapore is currently one of the strongholds of this species.

The 573 individuals found in Singapore here were reported to possibly make up more than half of the global wild population, the Straits Times reported last year.

More than just a safe haven for wildlife

Beyond providing a safe haven for wild plants and animals, the Dover forest plays a role in other natural processes.

A spokesperson for Speak for Climate, a ground-up initiative that aims to improve public participation on climate change-related issues, said that green spaces such as Dover forest can act as carbon sink.

Forests also help to soak up excess rainwater, mitigate soil and slope erosion due to solid root structures helping to hold the soil together.

Adding on to that, forests have been proven to have positive benefits on our wellbeing, such as reducing stress and improving recovery from physical and mental illnesses, said the spokesperson from Speak for Climate.

As the western end of Dover forest is connected to the larger Clementi Forest, clearing the forest could lead to further forest fragmentation and possibly increased human-wildlife conflicts as animals are displaced from their habitats, said the spokesperson from Speak for Climate.

Speaking to Mothership, the President of Nature Society (Singapore) (NSS) Shawn Lum said that the size and strategic location of Dover forest contribute to the survival and resilience of forest and wildlife found in south-central Singapore.

In a regional context, the Dover Forest takes on added importance, said Lum.

He explained that the forest is surrounded by several significant wildlife habitats and forested areas such as the Rail Corridor, Clementi Woods, Bukit Timah Nature Reserve, secondary forests in Bukit Batok, and Kent Ridge.

Here's how Dover forest is connected to Clementi Forest, and ultimately to Bukit Timah Nature Reserve, according to environmentalist Jimmy Tan:

"The forests of this key biodiversity region of the island are under pressure for owing to their development potential and their prime location (for people as well as for wildlife)."

The President of NSS also highlighted that Dover forest has great potential for educational and recreational use given its proximity to other HDB estates and educational institutions, including School of Science and Technology and Singapore Polytechnic.

Proposals for Dover forest from environmentalists

Along with the environmental baseline study, HDB has also provided an avenue for the public to provide feedback on the development.

Ong and Cheong suggest turning Dover forest into a nature park or to at least preserve old and tall trees that could qualify as heritage trees.

Heritage trees are trees with a girth of more than five metres and/or with botanical, social, historical, cultural and/or aesthetical value.

The duo also proposed alternative development sites, such as the huge open fields such as former Dover Road estate (opposite NUH), the abandoned Warren Golf club, and the field next to Ulu Pandan community centre.

If you are interested, you can provide your feedback to HDB before the window closes on Jan. 16, 2021.

Balancing the needs for development and conservation in a land-scarce Singapore will increasingly be challenging.

The key to spare more green spaces from development lies in better urban planning, according to Tay Kheng Soon, an Adjunct Professor from the Department of Architecture at NUS told Mothership.

Tay proposes to have multilevel multifunction compact designs for infrastructure to save on land.

He explained this would mean looking at mixed land use, which would feature building upwards with schools, workplaces, social spaces and shops in the same space.

The idea of a compact city is not a new one.

It is touted as part of sustainable development, with core strategies such as high-density, sustainable transportation, and the presence of green spaces.

One example of such a city is Amsterdam in the Netherlands.

Tay also highlighted that this compact design could transform Singapore over the next 30 years as having more green spaces around clustered dwellings can lead to a green web being linked together across the island.