OkLetsGo, a podcast put together by three Singaporean men, is facing a reckoning of its own making.

A backlash over the June 13 and 14 weekend was a culmination of months of casual but rampant misogyny put out by the show, which has grown to become very popular locally since its launch on Feb. 2, 2019.

Part of its appeal is its no-holds-barred approach that deviates wildly from the safe nature of traditional broadcast radio.

Despite its controversial airing of views, and most likely because of it, its many avid listeners from the Malay community have pushed the podcast to the top of the Spotify chart.

A rough figure puts its listenership at 100,000 people at its apex -- a massive hit for a podcast in a country where people prefer watching videos.

Based on samples of comments from people defending the trio, both men and women listen in -- but arguably, more men do.

OkLetsGo's appeal lies solely in its formulaic content primarily in Malay and English: Saying everything that cannot be said on mainstream media and then act like a bunch of lads about it.

Its success has been built on both the bawdy interactions between the three male hosts and their entrepreneurial daring-do -- the hosts, after all, took the plunge and branched out on their own, scoring sponsors in the process, and pulling in big name interviewees.

All three men are married with children.

All three have since apologised on June 15, but had avoided doing so in a written statement and on a short podcast episode before that.

Conspiracy theorists online are having a field day putting their finger on the pulse and explaining why the backlash against OkLetsGo has seemingly come out of nowhere.

Talk of a coordinated attack was first mooted by OkLetsGo in their 10-minute non-apology podcast on June 15 after being called out.

Dzar said: "This is a coordinated attack because we are lucky enough to have a wide listenership -- one in two Malays are listening to us -- and I feel that’s the only reason why people want to bring us down. This is something influencers have to go through.”

At least one forager for things to comment on has since taken to Twitter to predict the end of free speech and media not tethered to the state in Singapore.

However, the fast and furious nature of the backlash points more to the feathers OkLetsGo has ruffled over the past several months.

A coordinated attack, it is not.

A consolidated attack, it is.

Here is a 51-year-old woman penning a long post about OkLetsGo, admitting she was "shocked" by what she heard for the first time only now:

Before this, a post by another woman addressed why OkLetsGo is problematic for women and content creators:

OkLetsGo has thrived in the past year because they know what sells: Sex talk.

And when men engage in unfiltered speech, even for short spurts at a time, it spills over into overt sexism when left unchecked.

The trio puts out about three or more episodes per week, every week.

It has so far amassed 300 or so episodes.

Each episode is roughly one hour long.

If it is amazing to consider how talking for prolonged periods of time doesn't result in a dearth of content, it is because the conversations can take any possible turn.

In one episode, the trio describe how to get a girl by pretending to be gay:

And the conversation went in multiple ways:

• "Your member gets hard and you think to yourself, 'Eh sial ah', and then your gay friend notices it and asks, 'Eh, you got hard. Can I suck it?'

• (Imitating a woman) "Oh so all this while you wanted to see my breasts?"

"Of course I want to see breasts!"

In another instance, for example, the trio engaged in talk about elderly sex.

It comprised of talking about having to use a lot of lube when a mak cik and pak cik have sex.

The switch from mainstream radio to a podcast format has inevitably opened up previously uncharted waters by allowing the hosts to go into taboo discussions, such as sex, prison life, drugs, and baller talk, that can be refreshing for audiences bored by staid mainstream fare.

It resonates because men are supposedly known to talk like this in private.

And now, those conversations can be had publicly when it is normalised.

For women, and possibly any other group who are not CIS men, the discussions are seen as coming at their expense.

For context: The cover photo above is of a Malaysian celebrity who at 38 years old, is a mother, and with a lot of young men as fans.

In the podcast, one of the hosts talked about preferring bums and legs over breasts, and drawing laughter from the other two.

However, it appears this particular episode has been removed and cannot be accessed after it was called out.

Other examples of objectification of women have been documented for posterity online by casual listeners.

Such verbal tics emanating from the constant raucous banter have not gone down lightly with female listeners. 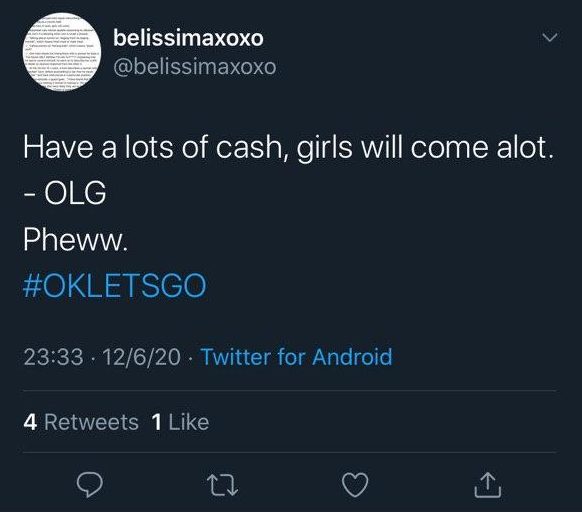 • Isn't it a pleasure to be beneath one's breasts? 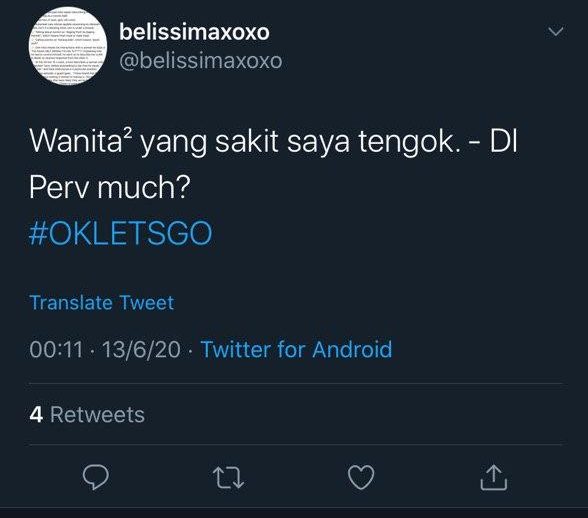 • I like to watch women who are "sick" (a lingo to mean promiscuous or dirty-minded).

The male fantasy creeping into domestic life was also openly discussed on the show.

This episode discussed if the hosts should hire a domestic helper.

The context was that one of the hosts' wife was pregnant at that time.

At around the four-minute mark, the other two hosts advised taking in a domestic helper.

The host hiring a domestic helper replied that he will "try to brainwash" his wife into hiring one.

The other two hosts then advised hiring an "ugly or old maid", because if he got a hot maid, it might be hard for him.

Then one of them asked: "If the maid is mopping the floor and her butt is lifted up, how?"

Another host replied: "Then mantat (have sex)."

The show's approach to content has been enterprising and opportunistic, for sure.

In between the sex talk, there are attempts at drawing out responses from interviewees in the news for all sorts of reasons.

In a June 8 episode, OkLetsGo invited a mother-son duo, Ibnur and his mom.

This demonstrated a very quick turnaround time given that the duo had allegedly made offensive remarks during a live Instagram session on June 3, which threw them into the spotlight.

By June 10, the mother and son were under investigation by the police for using racial slurs and vulgarities in an Instagram Story.

To give a hot take on the slurs used by the mother and son, OkLetsGo then invited onto the show two sisters, Nancy and Wendy, from Afro Sings.

While introducing the two young women of African descent who are residing in Singapore, one of the OkLetsGo DJs commented out loud: “I love young girls.”

There is, arguably, a certain trade-off to the show's no-holds-barred approach.

While it admits easy sexism into the mix, it also broadens the spectrum of speech almost overnight.

This explains why politicians who have appeared on the show are willing to give it a go.

The platform is popular and it gives that edgy feeling that something more might happen, but very often, precious little comes out of it.

Also, coming onto the show is to have immediate access to a particular ready captive audience.

OkLetsGo has interviewed recognisable figures in the media scene, such as comedian Kumar, and YouTube personality, Dee Kosh.

Member of Parliament for Jurong GRC Rahayu Mahzam was one of the interviewees.

As recent as May 23, Heng Swee Keat was also introduced onto the show.

The latest to helm the interviewee seat was Home Affairs and Law Minister K Shanmugam, but his episode has not been put out yet.

In other words, in less than one-and-a-half-years, OkLetsGo had managed to get Malay leaders onto the show.

All these appearances by the politicians can be read as implicit nods of approval.

Previous sponsors of the podcast include government entities, such as Mendaki, Health Promotion Board, and Workforce Singapore.

This list shows that the podcast has received the necessary wherewithal to continue.

And this is also where the Jekyll and Hyde nature of the show is evident.

OkLetsGo can do without misogyny

In the episodes featuring politicians, a basic level of decorum and PG-ness was maintained throughout -- to the detriment of the podcast's indecent entertainment value, for sure.

But it also showed that OkLetsGo is able to do away with the conscious locker room talk and still put on a show.

The three hosts have shown themselves capable of being on their best behaviour.

No uncouth verbal tics, sexist banter, or outright provocation of listeners to spark their interests in the conversation.

The only cheeky question OkLetsGo attempted in the Rahayu interview was to first comment that the MP has a cute voice, and then asking as the first question if anyone has commented about her cute voice when she makes speeches in Parliament.

Compared to that one time, one of the hosts said mid-interview that he just could not take his eyes off a transgender activist's cleavage when she was invited to talk about her activism work.

There is little doubt that OkLetsGo has cultivated a sizeable audience -- both men and women listen in, and they still vouch to support the show.

But the machismo has consequences.

Local DJ Jade Rasif has been on the receiving end of OkLetsGo fans' attacks after speaking up about the show's initial non-apology statement regarding accusations of being misogynistic.

The show's fans call themselves "bloods", a loaded gang reference, and in this case, an imported social media performance of masculinity.

Another woman who commented was quite close to being criminally intimidated by fans of the show who suggested they knew where she lives.

Detractors aside, the show also has its defenders.

Following the backlash, OkLetsGo has received ample messages of support, which it then republished on Instagram Stories. 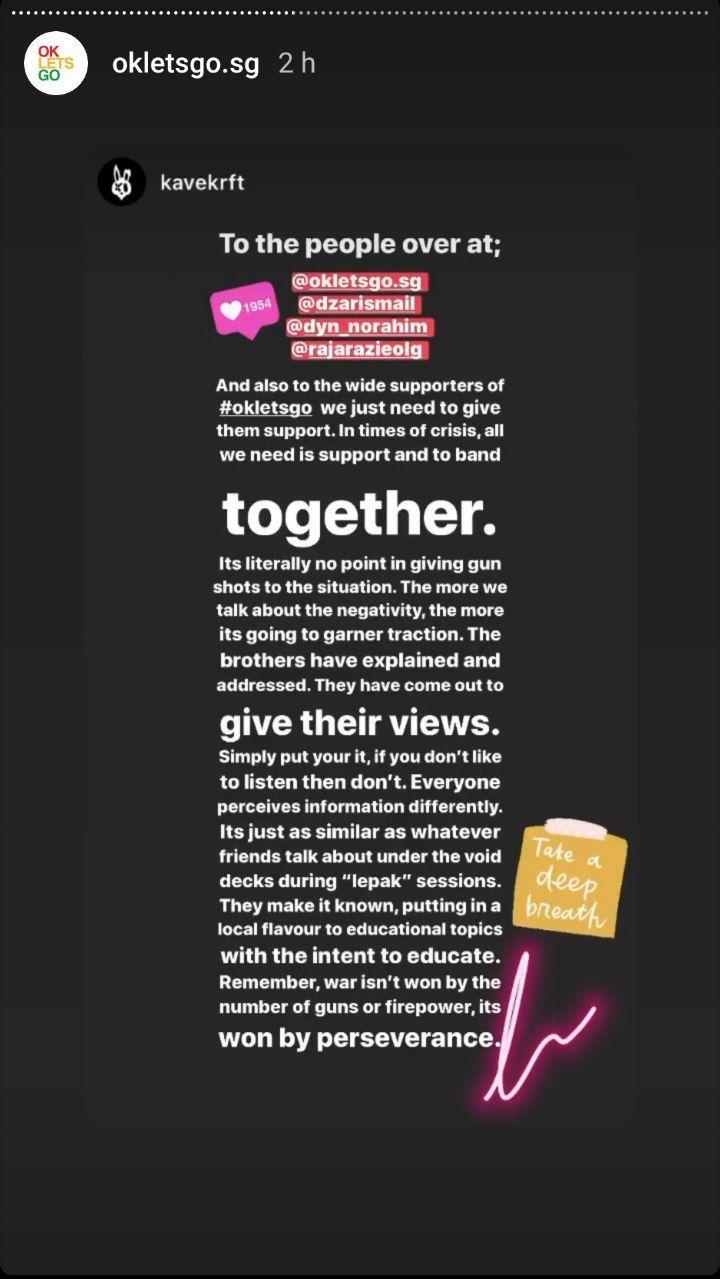 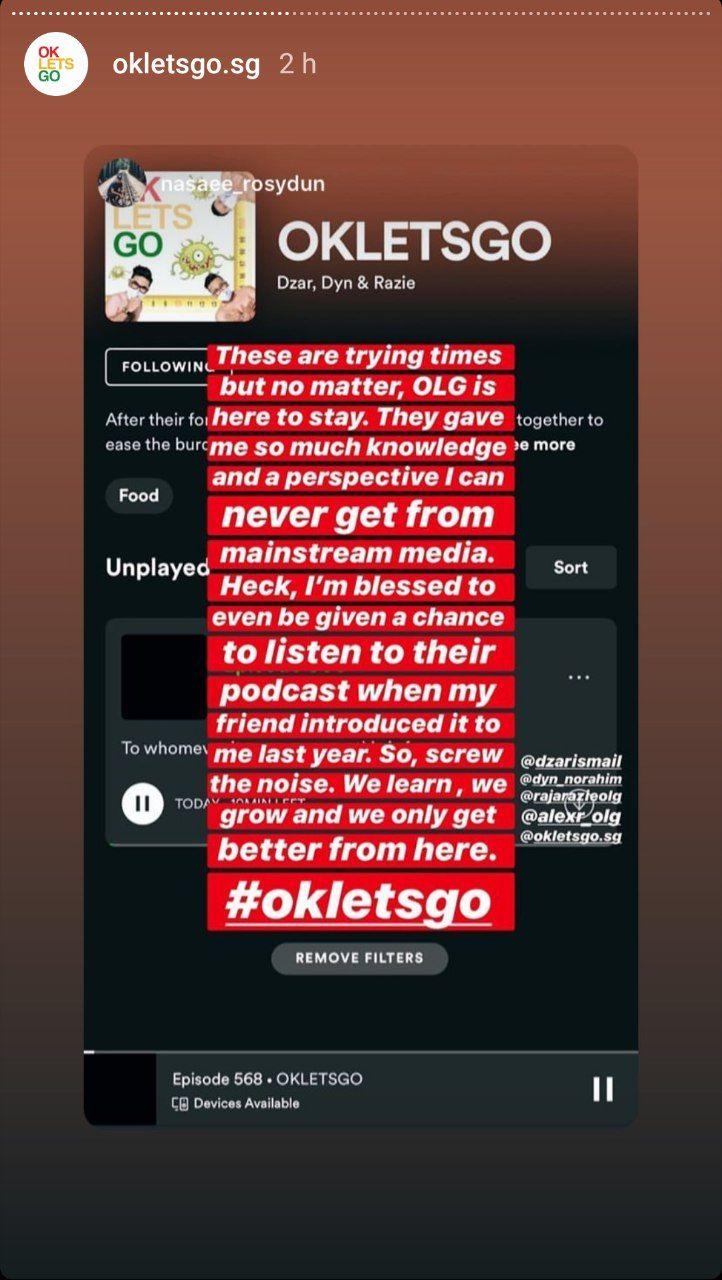 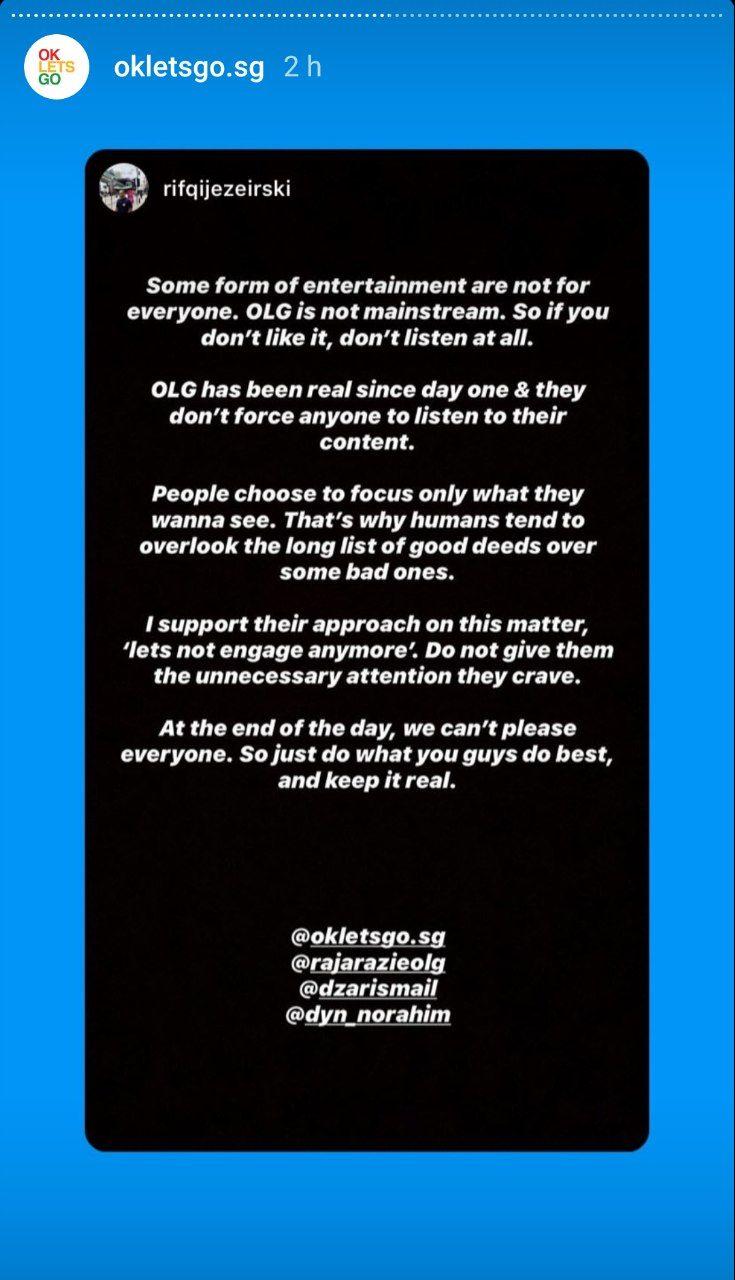 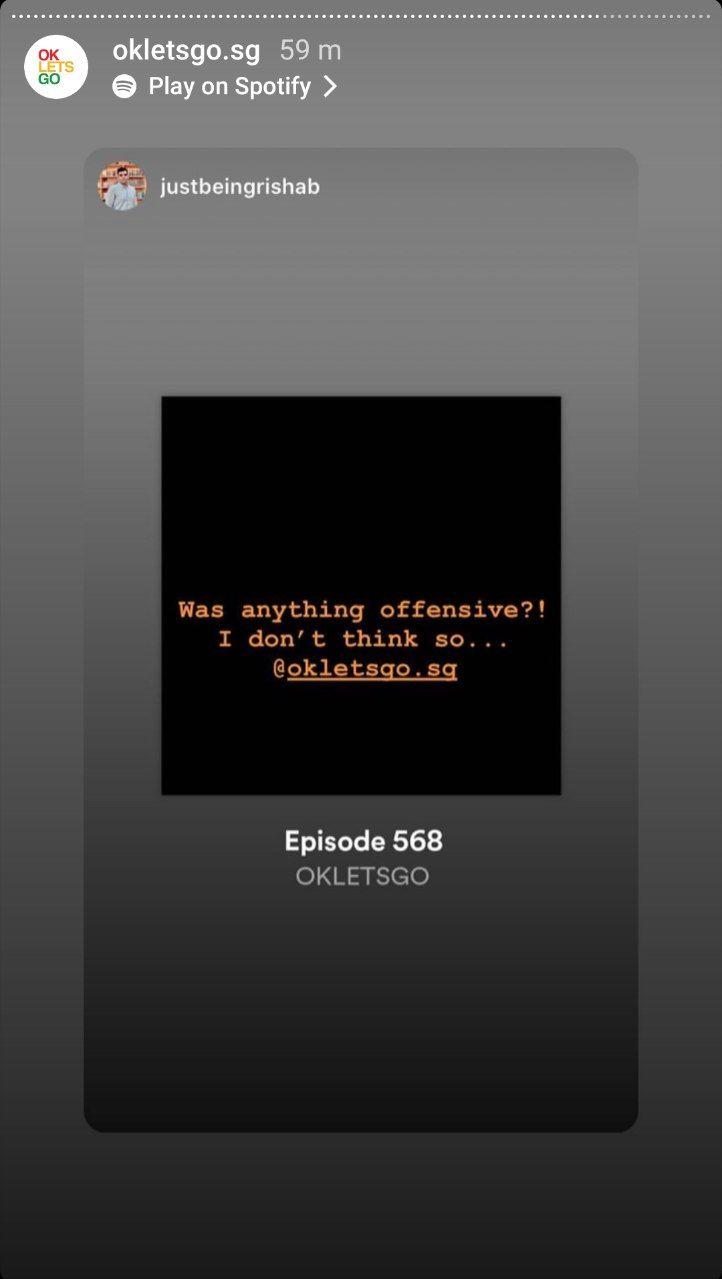 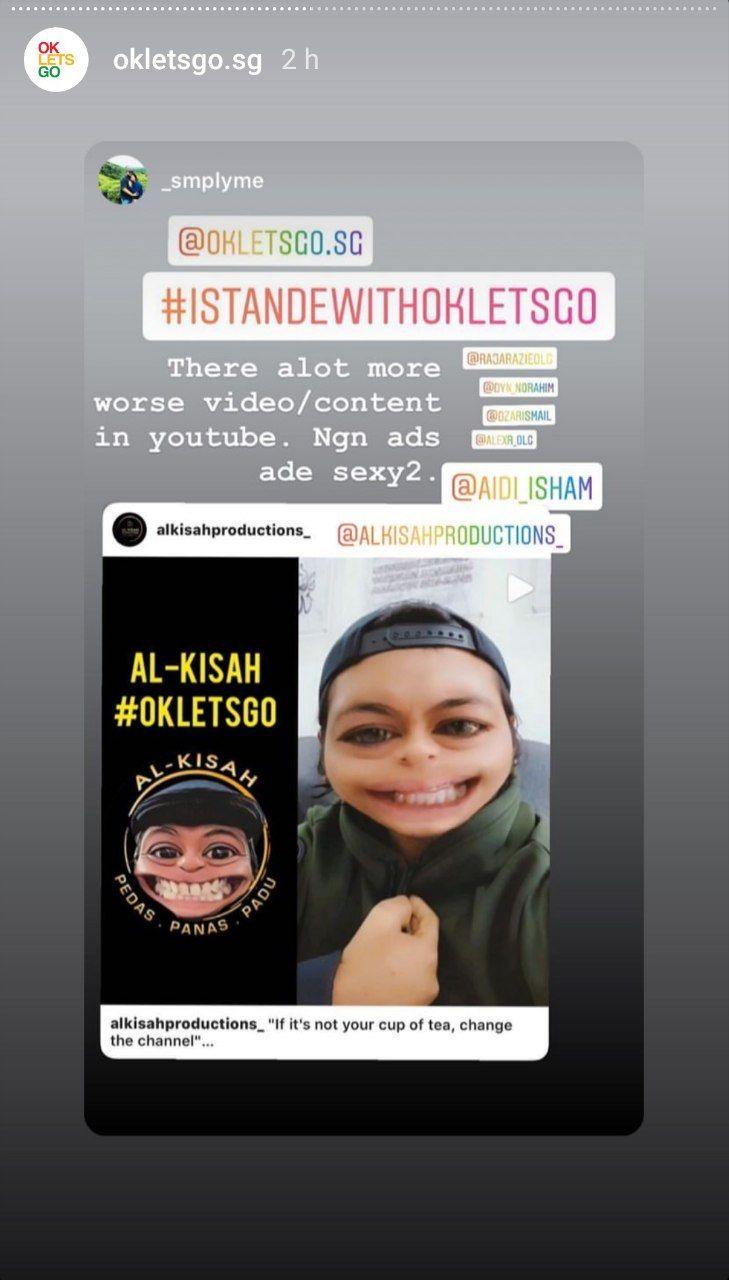 What can women and their allies do moving forward?

The common refrain by OkLetsGo's defenders is that no one is forcing anyone who doesn't want to be exposed to such content to listen to the podcast.

While fundamentally basic and seemingly true, the show's content is, unfortunately, not cocooned within the podcast.

There is nothing that stops the learned speech patterns and normalisation of belittling behaviour to find common expression in polite society and among young impressionable men.

The lived experiences of victims of sexism will mirror what has been expressed in the podcasts.

That enabling behaviour should be targeted doesn't show a concerted effort at shutting down speech.

In this instance, OkLetsGo was called out by individuals and then non-mainstream media -- a space that OkLetsGo proudly occupies.

Since the views in OkLetsGo are put forth on a platform public, they can and should be expected to be engaged in public.

If OkLetsGo were to persist in its business-as-usual approach, the disapproving public can be counted upon to continue to react to it.

The only outcome should be better speech at the expense of expressions that pretend not to have consequences.