A man who paid good money to watch U2 live in Singapore for the first time in the band's four-decade history, has come away feeling a little dissatisfied.

So much so he wrote about how he felt on Facebook for public consumption, and laid bare his doubts about the Irish band, who until the end of 2019, had never played in Southeast Asia before.

Assuming this naysayer is not trolling, and before going any further, here's what you need to know about U2 and their recent back-to-back maiden gigs in Singapore to set the context for this story.

• U2's Singapore concerts over the Nov. 30 and Dec. 1, 2019 weekend was 42 years in the making, having never set foot on Singapore's shores for a show before.

• Some 50,000 concert goers, who paid a few hundred dollars on average, showed up on each of the two nights to watch the legendary, multi-Grammy Awards-winning band, currently on The Joshua Tree Tour.

• The Joshua Tree Tour sees the band digging into their catalogue of old songs from their 1987 The Joshua Tree album released during the Reagan–Thatcher era and when Metallica ruled with 180 bpm songs as The Edge sustained a note for 180 seconds -- material that have a renewed message in 2019 in this epoch of widespread political and social unrest.

• Frontman Bono has always been open about his spirituality, faith, and politics, and The Joshua Tree album was influenced by gospel music, and is littered with Biblical and mythical references, besides harbouring socio-political themes.

• Concert-goers in Singapore for the Saturday gig literally had to fight their way to get to the venue as many were part of the godawful gridlock traffic jam in the city centre, given how multiple events incomprehensibly took place all at the same time within close proximity to one another.

So, with this background in mind, you can proceed to read what the man wrote about U2's concert in Singapore and what he was not impressed with -- assuming he is not trolling.

Because if the only thing he can think of at a U2 concert is not agape love, he needs to pray. 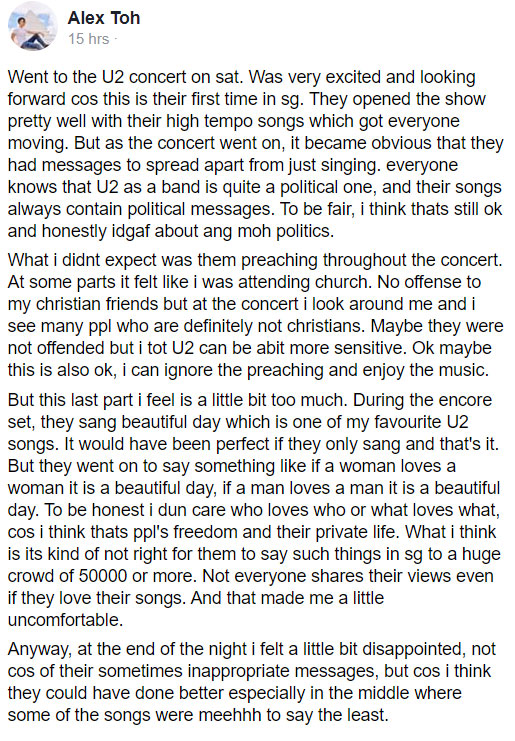 But if there is one thing you want to rib Bono about, it will be to ask him about Aung San Suu Kyi.