He collapsed while filming 'Chase Me', a Chinese reality show involving intense physical activities such as obstacle courses and stunts.

Doctors were unable to resuscitate the actor and he was pronounced dead.

Following his death, fans took to social media to call for the cancellation of the show.

Many felt the show was too strenuous and had a history of pushing celebrities to the brink of exhaustion.

Some even claimed the show made the celebrities do activities they were reluctant to participate in.

The show, which is broadcasted by Zhejiang Satellite TV, has since stopped its scheduled broadcast.

It was initially scheduled for 9:10 pm on Nov. 29, but was replaced with another TV show.

The TV station stated on its official Weibo account that it takes full responsibility for Gao's death. 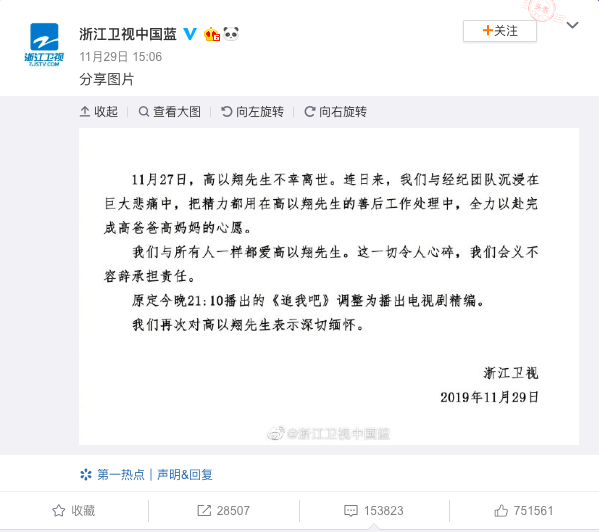 After his death, it was found that Gao had been ill before he began filming Chase Me.

He began filming for the show at 8:30am on Nov. 26 and worked the entire day.

Around midnight, he complained of some discomfort and around 1.45am, he collapsed.

In total, he had been working for 17 hours straight.

Before collapsing, Gao was allegedly heard saying, “I can’t go on anymore” in Mandarin.