Typhoon Hagibis made landfall on Oct. 12, leaving up to 35 dead with 11 still unaccounted for.

The typhoon, said to be the strongest since 1958, also dumped torrential rain on state, causing rivers to burst their banks and suburbs to be drowned in floodwaters.

One thing that the internet took note of though, was the remarkable cleanliness of the floodwaters, even in the aftermath of a devastating natural disaster.

Surprisingly, the waters were devoid of mud, trash and debris, and were so clear the roads beneath were almost visible in some parts.

Many social media users praised Japan and its people, who are well-known for maintaining strict levels of hygiene and sanitation. 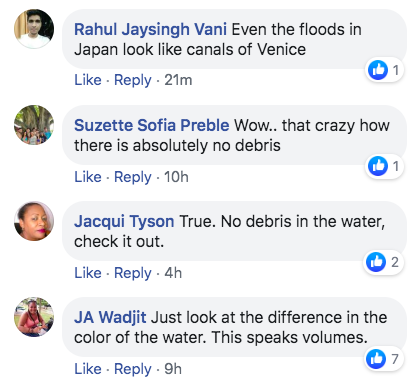 However, there were several sceptics that argued that not all parts of Japan had such clean floodwaters.

This might be true perhaps in more rural areas, such as these photos which were taken in Hagiwara Village in Akiruno, to the west of Tokyo.

And Twitter posts did show some areas which were deluged by muddier, murkier waters.

Despite this, it appears the floodwaters are still relatively clean with barely a piece of trash or debris in sight.

Some of the images below, taken after the typhoon struck, even look particularly serene.

Truly a testament to Japan's cleanliness and resilient infrastructure.