A four-month-old puppy was allegedly injured after getting pinned to the ground by a dog trainer in Singapore during a training session.

According to the puppy owner, Jess Neo, the incident happened after her Japanese Spitz, named "Snowy", bit the dog trainer's hand. 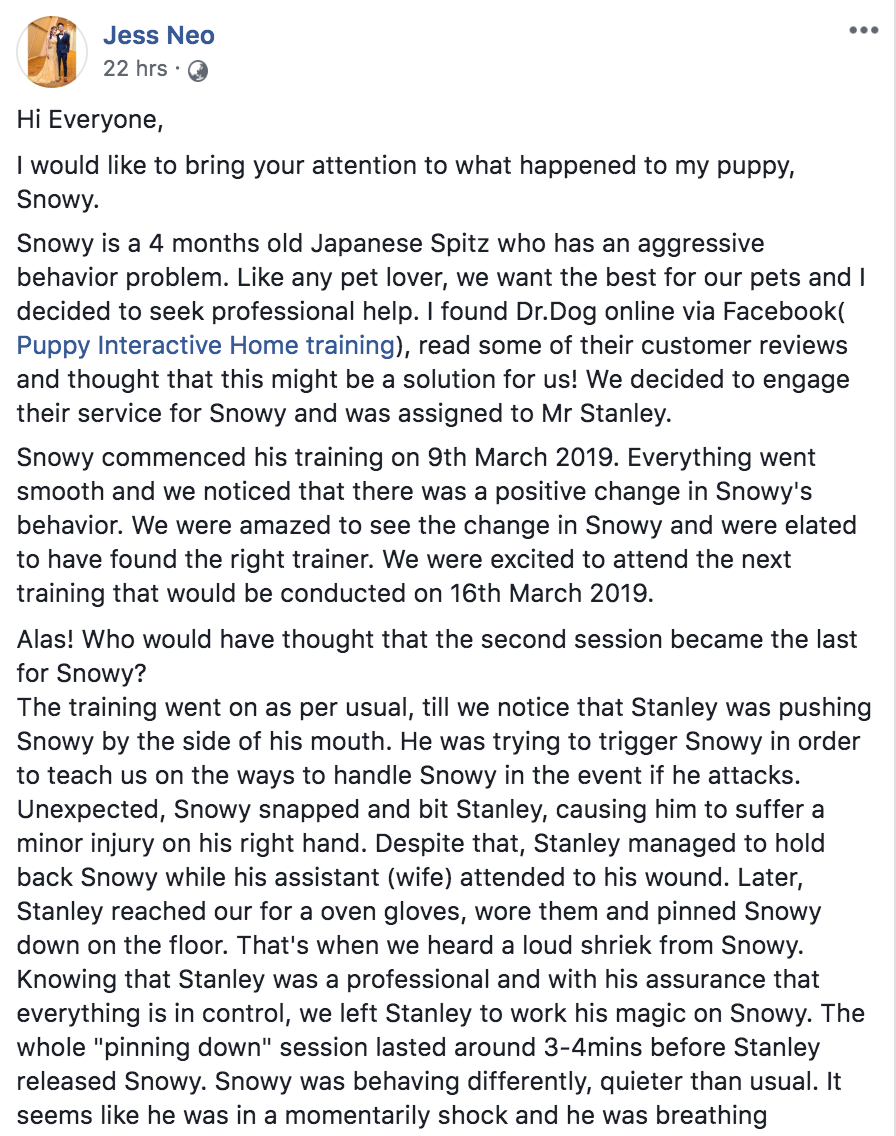 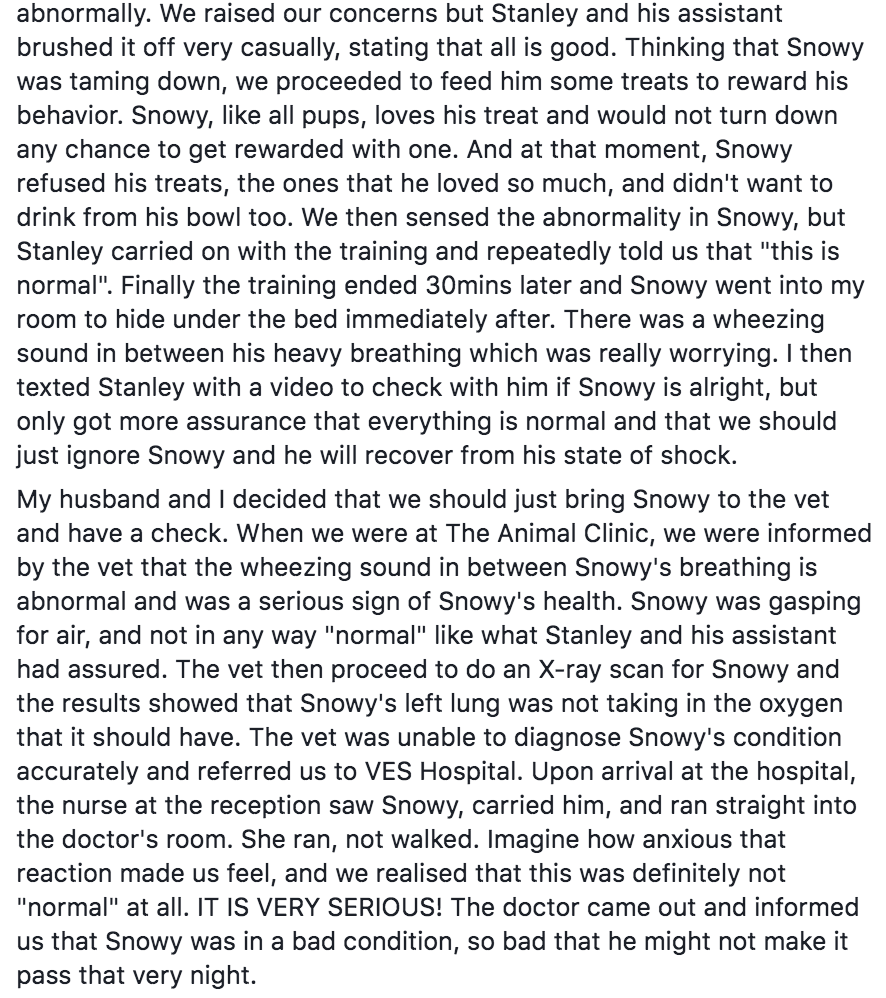 Neo explained in her post that she decided to seek professional help to deal with Snowy's aggression issues.

As she saw a positive change in Snowy's behaviour after the first session, which took place on March 9, she was looking forward to the next session on March 16.

However, the session did not go as planned for Neo.

During the second session, Neo claimed Stanley was trying to trigger an aggressive behaviour from Snowy by pushing him on the side of his mouth.

Snowy then bit him on his right hand.

After Stanley's assistant helped attend to his wound, Stanley allegedly wore an oven glove and pinned Snowy to the ground.

That was when Neo supposedly heard a "loud shriek" from Snowy.

Snowy then remained pinned to the ground for the next three to four minutes before he was released.

Neo said she noticed that after he was released, Snowy allegedly behaved differently and was "quieter than usual".

She and her husband then expressed their concerns, but Stanley allegedly brushed them off and said all was good.

Neo then proceeded to reward Snowy with some treats that he loved.

However, she said that instead of eating the treats immediately like he usually did, Snowy refused the food.

The training session then continued for the next half an hour, during which Neo supposedly sensed Snowy behaving abnormally.

However, she claimed that Stanley kept assuring her that "this is normal".

After the session finished, Neo claimed Snowy went to hide under the bed in her room.

That was when she noticed "a wheezing sound in between his heavy breathing".

She then took a video of Snowy and sent it to Stanley to ask if Snowy was doing alright.

Stanley then allegedly reassured Neo again, saying that it was normal and that Snowy would eventually recover from "his state of shock".

Neo and her husband then decided to bring Snowy to The Animal Clinic, where the vet allegedly told them the wheezing sound in between Snowy's breathing was not normal.

An X-ray scan showed that Snowy's left lung was "not taking in the oxygen that it should have".

However, the vet referred them to VES Hospital as he was not able to diagnose Snowy's condition accurately.

At VES Hospital, Neo said the vet informed them that Snowy was in such a bad condition that "he might not make it pass [sic] that very night".

According to a statement issued by VES Hospital, Snowy was admitted for treatment of "suspected non cardiogenic pulmonary edema".

The reasons that caused this condition include "upper airway obstruction such as strangulation or a sharp pull on the lead, electrocution, head trauma or seizures".

The statement also noted that there was "no obvious signs of external abuse, bruising or injuries".

Neo said that she requested Stanley for a partial refund of the "service fee".

However, she claimed that Stanley said it was unfair to him, and that he did not even send them his medical bill for the injury that Snowy inflicted on him.

After "much negotiations", she said that Stanley "relented", and told them to think about the compensation amount before getting back to him.

Later, after Snowy was discharged, she requested for a refund of the "service fee" and a "portion of Snowy's medical bill".

Thereafter, she claimed that Stanley told her about the terms and conditions listed on his website, saying that owners are not allowed to "claim against any injuries caused during the course of training".

"Indirectly in the event when the dog attack the trainer/ assistance during the training or handling or controlling the owner’s dog.

Any injuries / loss from the dog, owner(s) have to agree not to claim against the company (DR-DOGS.COM) or trainer for any of the expenses."

Neo also wrote in a comment on her original post that the compensation was secondary to bringing the matter to light.

The dog trainer involved took to Facebook as well to give his version of events.

He refuted Neo's accusation that he was trying to "trigger" Snowy by pushing him on the side of his mouth.

Instead, he said that he was teaching the puppy to get used to people touching him at "all parts of the body, face mouth, ear and paws", so it can be handled with no issue at all by groomers and vets.

He also claimed that it was not him who wanted to "trigger" Snowy's bites, and that Neo requested him to touch Snowy's mouth to "see whether he bites".

Moreover, he defended his training method of pinning an aggressive dog down, saying that it is to calm the dog down and that he would not do it "unless the aggression is beyond control".

In addition, he made the following points:

In the comments, he provided a screenshot of a WhatsApp conversation he had with Neo as well, to prove that he did visit the vet clinic on March 17.

Vet said no signs of abuse

Show of support from previous customers

A number of Facebook users also commented on his post, vouching for the effectiveness of his training methods.

No agreement on compensation reached

In response to Mothership queries, Neo said no compensation agreement has been reached, and that she had not contacted Stanley since March 18.

Neo said Stanley referred her to his website when she requested for a copy of the agreement she signed.

Stanley told Mothership that Neo did not get back to him after saying that she would discuss with her husband regarding the compensation amount.