His new public position appears to be a U-turn from his previous comments made internally to staff three days earlier on Thursday, which was called out and criticised widely in China by tech workers.

These new comments were picked up by South China Morning Post, which is owned by Alibaba.

What is Jack Ma's new position?

Ma apparently had a slight change of heart over the course of three days.

In a new post on his Weibo account on Sunday, Ma said: “If you find a job you like, the 996 problem does not exist; if you’re not passionate about it, every minute of going to work is a torment.”

“No one likes working at a company that forces you to do ‘996’. Not only is it inhumane, it’s unhealthy and even more unsustainable for long periods – plus workers, relatives and the law do not approve of it,” he said.

“In the long term, even if you pay a higher salary, employees will all leave.”

Ma also said enforced long hours are “unsustainable” and that companies that forced staff to work overtime for profit were “foolish” and doomed to fail.

Ma also wrote in his latest Sunday Weibo post: “Real 996 should be spending time learning, thinking and for self-improvement. The people who stick to 996 must have found their passion there, and their happiness besides from money.”

Ma said he expected to be criticised for his views.

However, he felt it was necessary to talk about the issue, he also wrote.

What did Ma say to his staff?

On Thursday, Ma said working overtime and 72-hour weeks could be a “huge blessing” for young workers who found careers they were dedicated to.

Ma was speaking during an internal staff event, according to a transcript published on Alibaba’s official WeChat account.

Ma also said in his staff speech that the company expected people to be ready to work 12 hours a day since it had huge commitments to its clients.

“If you don’t work 996 when you are young, when will you? Do you think never having to work 996 in your life is an honour to boast about?” he said in the speech.

“If you don’t put out more time and energy than others, how can you achieve the success you want?”

What was Ma addressing in his internal staff speech?

Ma was responding to a debate that has emerged in China in recent weeks.

This was over the 996 schedule, which means working 9am to 9pm, six days a week.

Tech workers had set up a discussion group called “996.ICU” on the code-sharing platform GitHub -- a global code-sharing and collaboration platform by Microsoft.

Such long hours, the discussion suggested, could lead to the hospital intensive care unit with burnout.

Ma had previously said in 1999, 20 years ago, that having work-life balance was not the way to creating a company that could rival America's world-dominating tech industry companies. 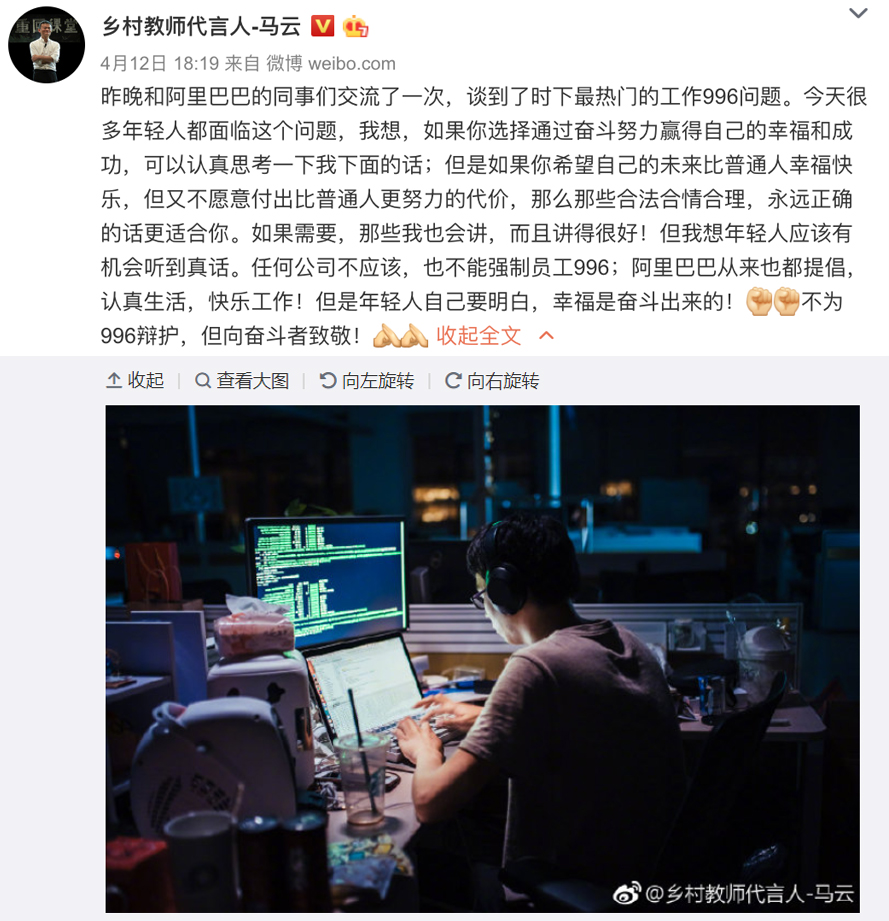