Two men are under police investigation in Singapore after online comments were made about throwing an egg at Home Affairs and Law Minister K Shanmugam.

Who made the police report?

A police report was lodged on March 19, but the police did not reveal who made the report.

Who are the two men?

The younger man supposedly outed himself on HardwareZone forum to provide details of him being visited by the Singapore police after his comment was posted.

He was paid a visit by the police on the same day the report was made on March 19.

This was what the man allegedly posted that got him into trouble, according to the March 22 HardwareZone thread titled, "Sinkie kenna lim kopi after he said he wan to throw eggs at Shanmugam": 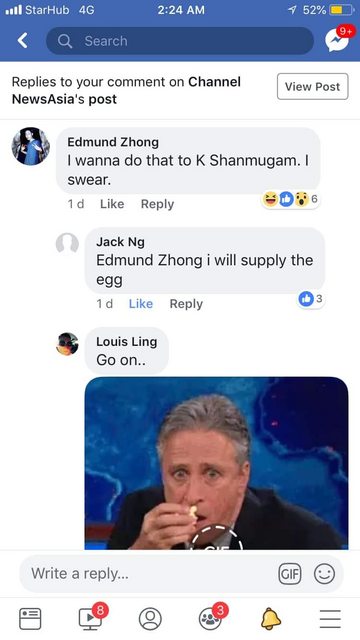 Edmund Zhong wrote: "I wanna do that to K Shanmugam. I swear."

Another user named Jack Ng said: "I will supply the egg."

What did the forum thread starter claim?

Apparently 3 days ago , 2 officers from Ang Mo Kio Division HQ went to my home regarding my egg throwing comments towards K Shanmugam.

Felt a mix of emotions as I didn’t expect a harmless but straightforward comment can gain so much reaction. But as we all know , majority of Singaporeans are the biggest complain kias and the police simply had a job to do, even if they think it’s a waste of time. Just like this comedy case...

Have a good weekend everyone!

The forum thread also provided a photo of how the 20-year-old man was summoned to the police station: Via a vintage-looking yellow card with handwritten details of the appointment date and time and personnel in charge.

Where did comments appear?

The comments that led to the police investigations were made on a Channel News Asia Facebook post on news of statements made by Australian senator Fraser Anning.

Anning's comments were made in the aftermath of the Christchurch mosque massacre where he blamed Muslim immigration and got egged by a teenager.

What kind of offence did they commit?

Both men are assisting the police with investigations for the offence of communicating an electronic record to incite violence under Section 267C of the Penal Code.

The police said: “The Police take such threats seriously, and will carry out investigations accordingly.”

A police report was lodged after the 20-year-old man left a comment on a Facebook post “suggesting that he wanted to throw an egg” at the minister.

“A 47-year-old netizen subsequently responded to the comment to provide information on the Minister’s upcoming meet-the-people session,” police added.

What are the punishments for such offences?

Anyone convicted of this offence can be jailed for up to five years or fined, or both.