The Miss Universe 2018 competition was held on Dec. 17, 2018, and watched by hundreds of millions of people live.

Miss Universe Philippines, Catriona Gray, made history by winning the title, and became the fourth contestant from the Philippines to come out tops at the competition.

The 24-year-old Filipina-Australian was crowned at the Impact Arena in Bangkok, Thailand, beating 93 others.

Sharing the limelight is the spunky-looking and feisty Miss Universe Vietnam, who also stole the hearts of the global audience with her Top 5 finish, as she has been hailed as a godsend in a competition that has grown stale in the previous years.

Now that the title has been won and the outcome settled, there appears to be a minor hullabaloo in Singapore.

On Dec. 24, a Facebook post by a Singaporean pointed out that some censorship was carried out to the subsequent broadcast of Miss Universe 2018 competition.

The entire two-hour competition can be viewed online on Toggle, run by Mediacorp, but this version made available after the event apparently showed only the truncated answer given by Miss Universe Philippines during the Top 5 question-and-answer round.

This was so as the question asked of her by host Steve Harvey, pertained to the legalisation of marijuana.

This segment occurs at the 1 hour 42 mins and 40 sec mark of the Toggle video (Click on image below to go to Toggle). 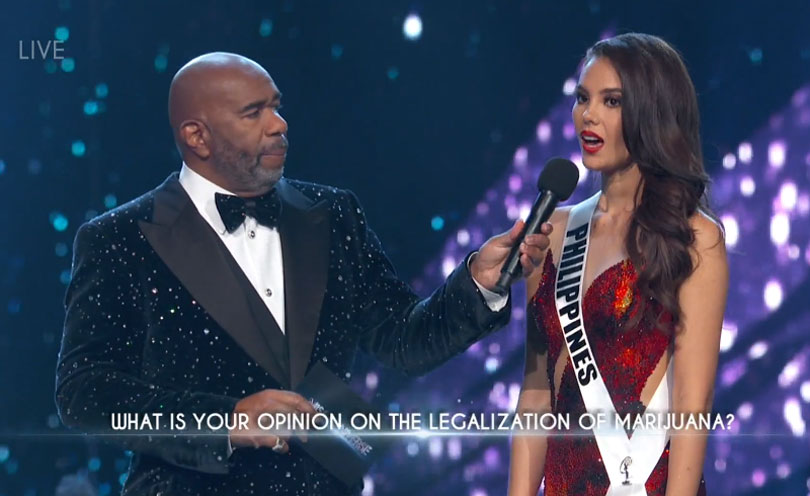 What was edited out

The part of the answer in bold was edited out of the Toggle broadcast, probably because it was deemed to condone permissiveness, which goes against the zero tolerance policy Singapore adopts towards drugs:

Question: "Canada recently joined Uruguay as the second nation in the world to make marijuana legal. What is your opinion on the legalisation of marijuana?"

Answer: "I’m for being used for a medical use, but not so for recreational use. Because I think if people were to argue, 'Then what about alcohol and cigarettes?' Well, everything is good, but in moderation. Thank you."

The censored truncated version effectively changed the meaning of Miss Philippines' answer from being slightly dubious about the extent of recreational marijuana use to being okay with medical marijuana only.

You can watch the full uncensored answer here:

And you can compare it to the censored version here:

The Central Narcotics Bureau (CNB) recently reiterated Singapore's stance on marijuana, also known as cannabis, on Oct. 26, 2018, which is to impose stiff penalties for the trafficking, possession, consumption, and import or export of such substances.

CNB added that its drug control policies are underpinned by evidence and research, noting that a literature review conducted by the Institute of Mental Health experts affirmed the addictive and harmful nature of cannabis, and that it damages the brain.