Is inequality in Singapore a myth?

It certainly isn’t as apparent here, but exists nevertheless. That’s what at least 40-odd Singapore youths think, having attended the final session of a two-parter Youth Conversations series on inequality. If you’re curious, they’re not a bunch of disillusioned young Singaporeans. In fact, when asked to rate the state of inequality in Singapore from 1 (extreme) to 10 (none), about half of them picked 5 and above.

No one picked 10, naturally.

“Although we don’t see homeless people on the streets”

Quite like a growing number of young Singaporeans, they agree that even though inequality is seemingly out of sight, it isn’t out of mind.

In particular, they understand the idea of privilege, and how that can affect an individual’s opportunities to improve their life. 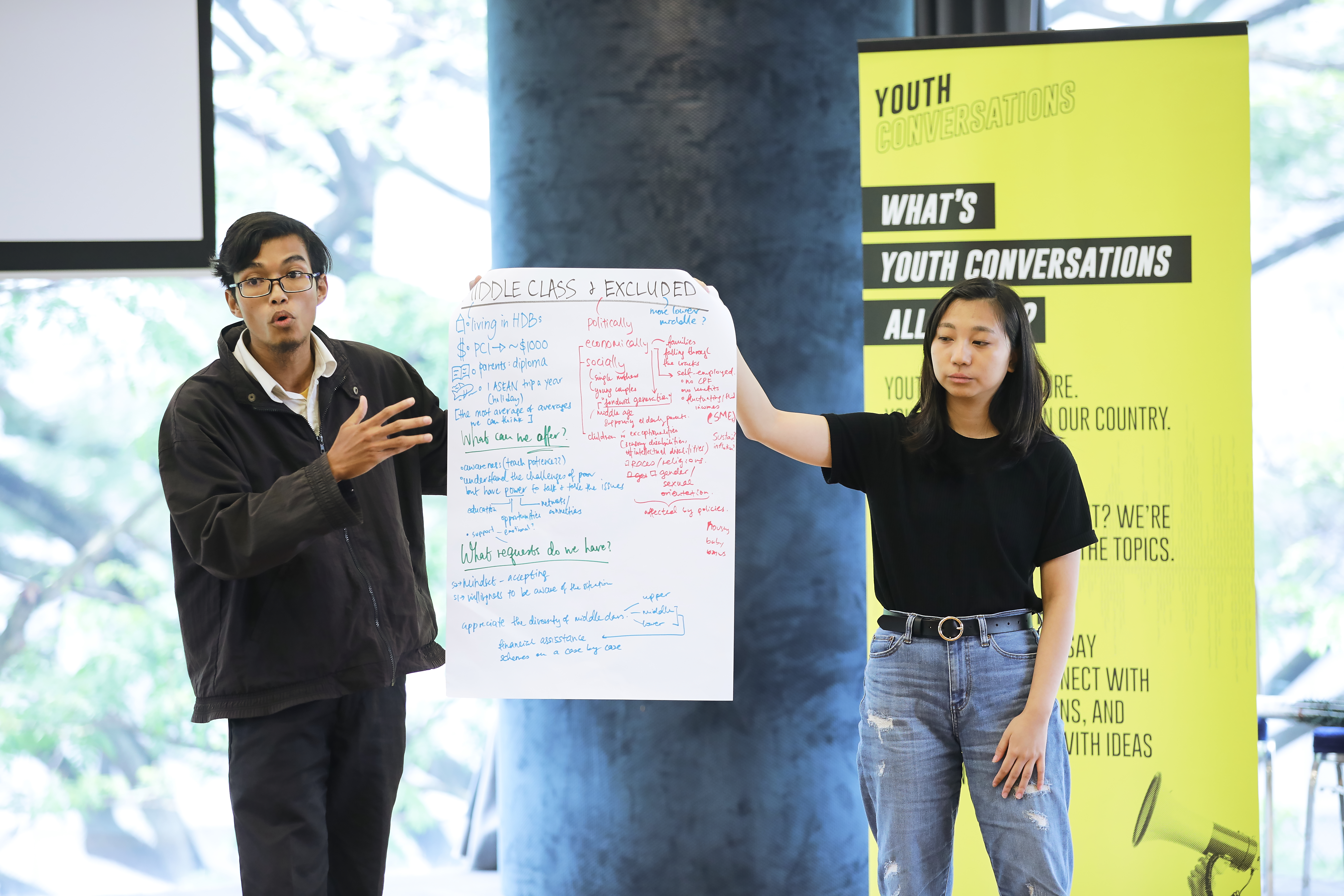 Perhaps more insidious because of its invisibility, one participant shared his view that even proficiency in language -- mastery of English or Mother Tongue dependent on family background and socio-economic status -- affects the articulation of ideas, and how one may come to view their circumstances as their fault, instead of a larger problem of how meritocracy sometimes fails to account for forces outside of individual effort.

Like the ability to afford tuition, or even just time and a conducive space to study.

Desire for equality not just a passing fad

The first thing that was played at the session was the Capuchin Monkey experiment video.

In some sense showing that the desire for fair and equal treatment is quite biological, it facilitated the discussion that equality is not just another trendy “progressive” Western cultural ideal that has infected the millennial population.

One of the highlights of the session was small group discussions with Corrina Lim, Executive Director of AWARE, Leong Chan Hoong, Head of IPS Social Lab and Ang Bee Lian, Director of Social Welfare at MSF.

Speaking with the youth, they shared that to effect change, time has to be invested. Petitions take a decade to materialise, results don’t come overnight, and every last mile counts -- their experiences as living proof that equality is a long and hard battle to be won.

Certainly not a passing fad to be forgotten once the next “progressive” trend comes along.

Does hard work or growing up in a well-to-do family lead to success?

In this second conversation, besides encouraging them to champion for inequality causes, methods to manage and deal with differing opinions were also shared.

Because discussions on class divide and inequality can sometimes be contentious.

But as expected, coming to a common consensus on what the key factors for success and social mobility are was tough.

One particular activity with Leong made this obvious.

Asking participants to hold up placards with phrases such as “Intelligence”, “Growing up in a good neighbourhood”, “Hard Work”, “Having rich parents”, “Having good social relations”, “International experience” and “Appearance”, he had the youths talk about what a person from a low-income family would choose as a factor for success, compared to someone from a well-to-do household. 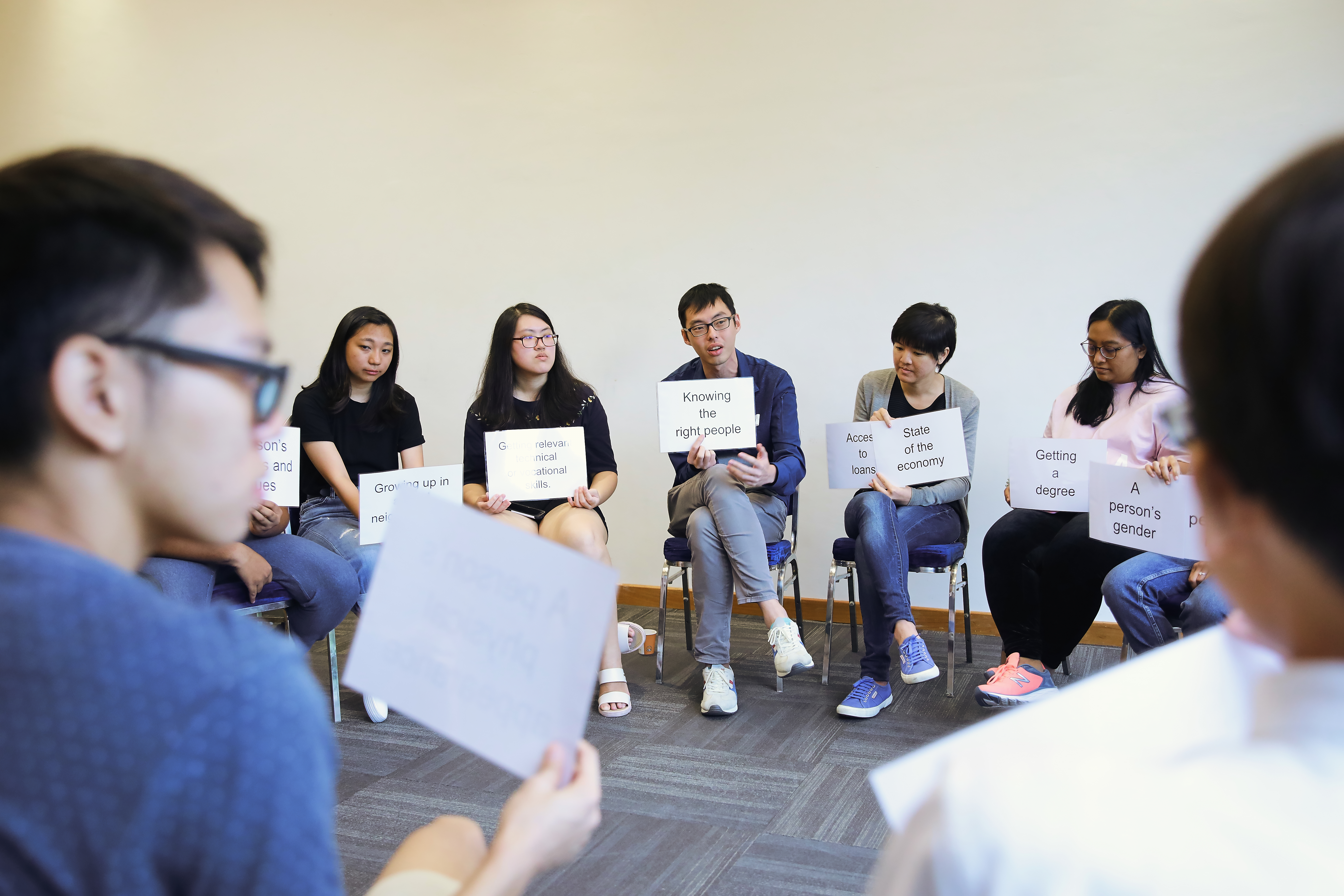 Which also means nothing, if it is outside of individual effort.

Care enough about inequality to seek discussion with like-minded peers

The session was a whole day event that the youth, aged 17 to 35, willingly signed up for. 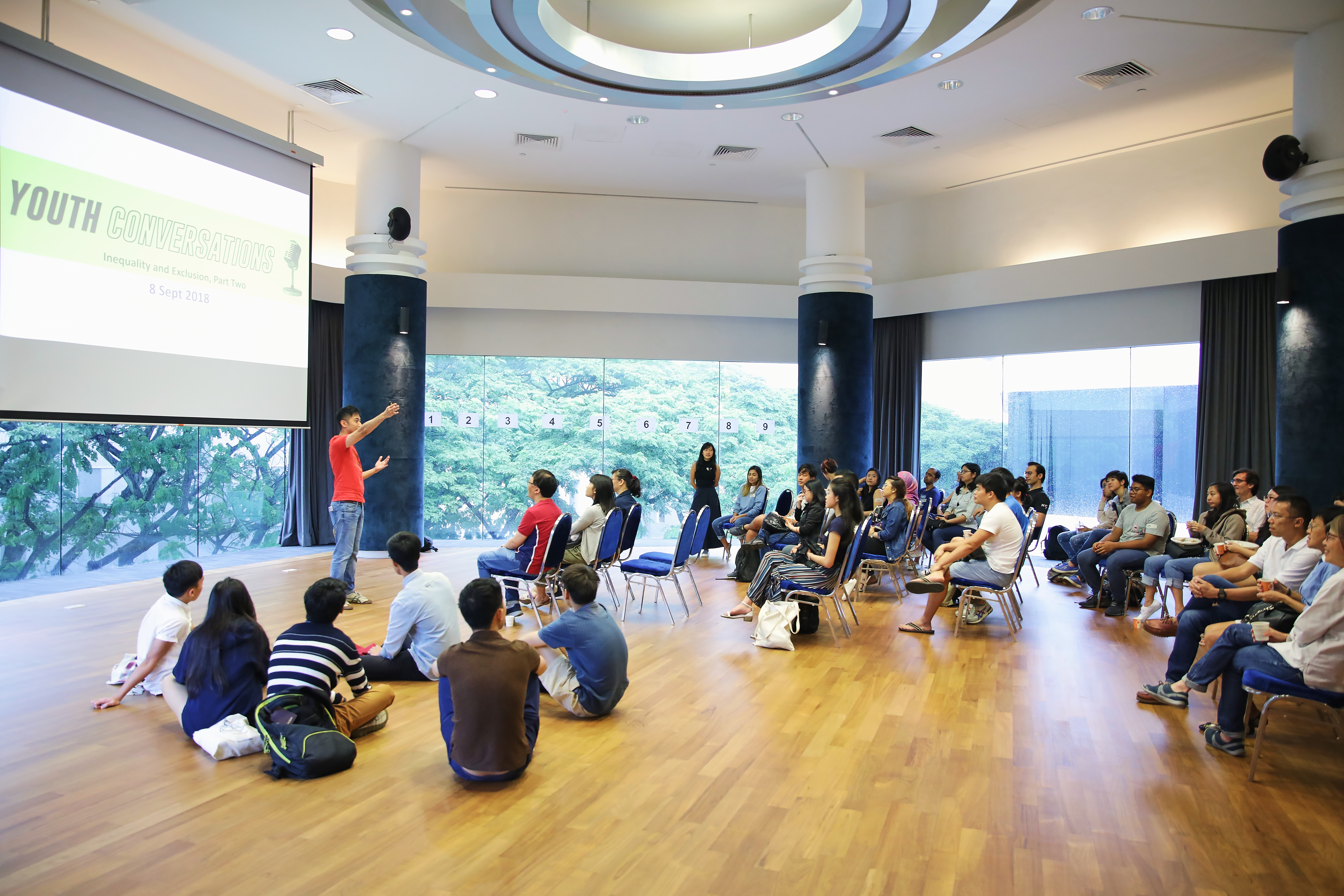 Far from just being a scholarly seminar for scholars, they came from all walks of life, with their own observations about inequality in Singapore.

Many of them also participated in the first session of the conversation, where inequality issues in schools and the community were discussed.

This means the young people knew what they were talking about.

But what can our youths do to make Singapore a fairer place for everyone? There’s no answer yet, but they acknowledge that inequality exists, and are willing to work to change it.