Chris* is someone most people would call an otaku -- a Japanese term for young men obsessed with computers, anime, or manga, to the detriment of their social skills.

For the 27-year-old, however, it is his waifu (wife) from the manga /anime series Fate/stay night who keeps him preoccupied.

Her name is Saber:

At one point in the interview, when I refer to her as a hobby, Chris corrects me.

"Actually, she's not my hobby. My hobby is tabletop gaming and all that," he says good-naturedly.

We eventually settle on the term "companion" to refer to Saber-related activities.

Wait. What is a waifu?

The word waifu derives from "wife", and is used by an otaku to indicate that he has taken a fictional female character -- usually from an anime -- as his wife.

Rather than focus on one particular doll or figurine, enthusiasts are instead fixated on the anime/ manga character itself, which can come in many forms.

This includes figurines, plush dolls, pillows, and all sorts of merchandise. 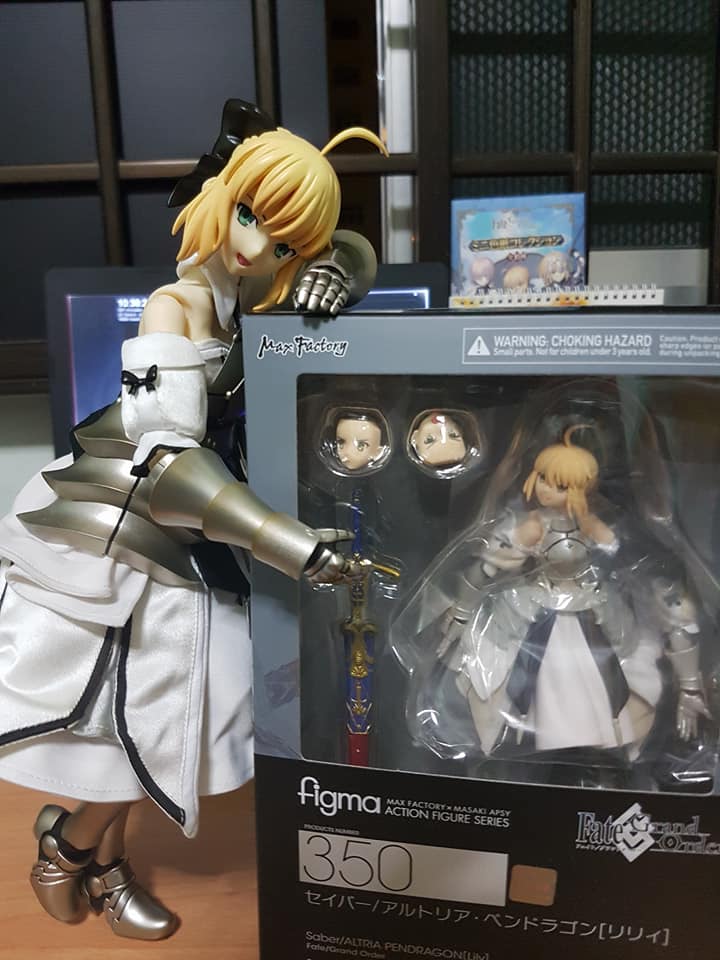 As it is, Chris has multiple dolls and figurines of Saber, and has spent around S$6,500 on his companion so far.

But money is not his only show of dedication.

Early into our meeting, Chris reveals the contents of his bag, which contains almost exclusively of anime-related stuff.

There are two figurines and two boxes -- one holding the dolls' paraphernalia, and the other, a stack of trading cards and an iBanking token.

Chris brings the smaller figurine wherever he goes. He calls her a "travelling companion".

Saber follows Chris to work, social gatherings, when he goes out alone, and even on overseas trips.

"More out of habit than anything else," he clarifies. "I don't really think about bringing her out, I just put her in my bag then..."

The following are photos of Chris and Saber hanging out: 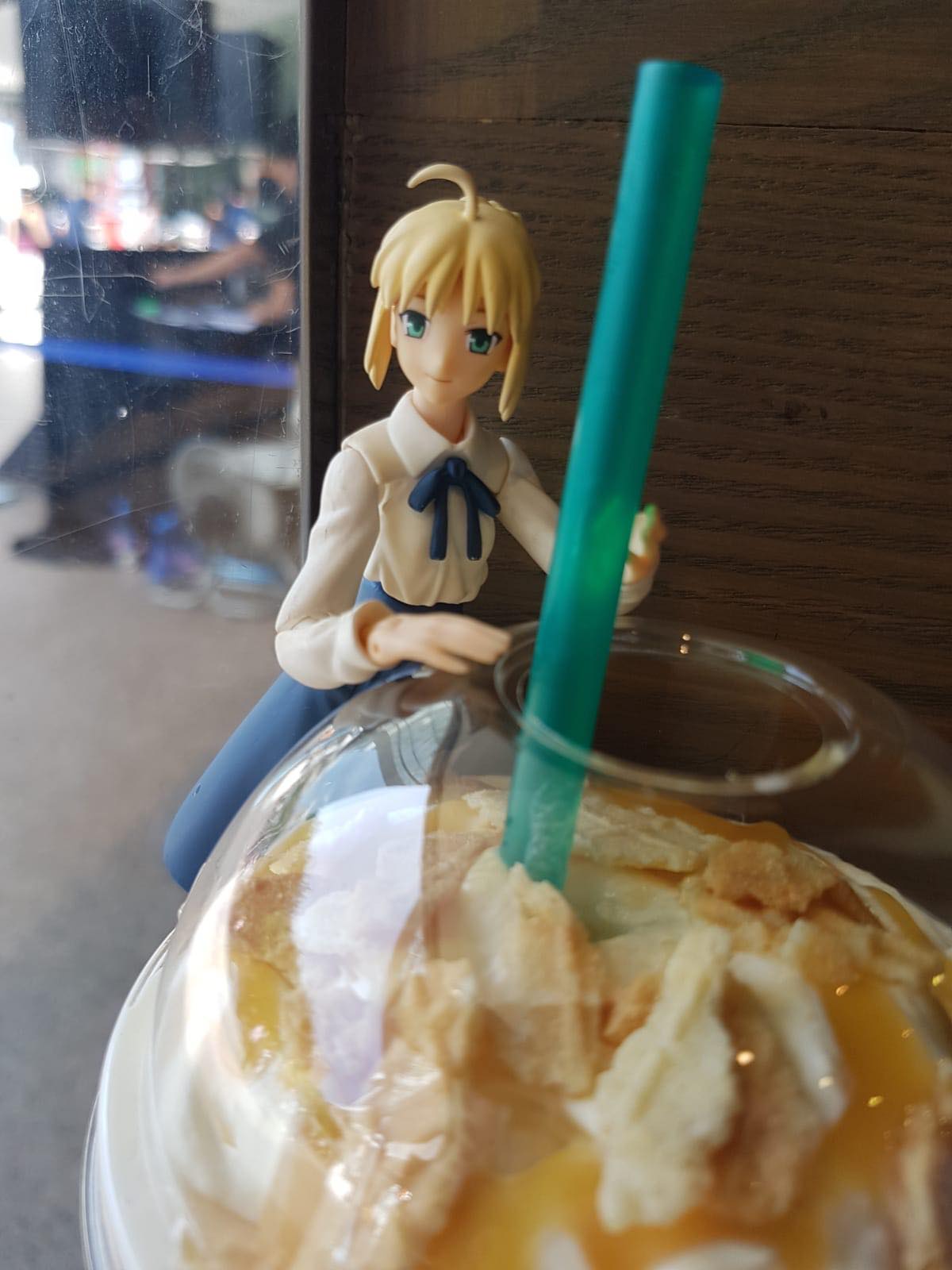 As for the time Chris "made out" with a plush doll of Saber, it happened when he was watching a movie alone.

A couple had apparently been making out behind him -- rather furiously, I assume, for Chris to have taken notice -- and the public display of affection (PDA) had annoyed him so much that he decided to mimic their actions.

With his plush doll, in case it wasn't clear enough.

"I just copy whatever they do lor. Then they got creeped out then they stopped doing," he laughs. "It also helps that I live in Yishun."

Removed from this interview setting, I would have found the Chris who made out with a plush doll weird, and perhaps even creepy.

But I feel myself vaguely won over by the candid and unabashed retelling of his life.

Unfortunately, the strata of otakus is often associated with creeps -- something Chris acknowledges, and takes pains to avoid appearing as (despite his frank confessions before, which seems quite at odds with this principle).

In fact, although Chris carries Saber around at all times, he rarely takes her out of his bag.

"Cause the - it's a very weird thing to see a guy playing with dolls," he says almost sheepishly.

"Most of the people think it's weird. For me right, even though I enjoy doing this kind of thing, I try not to creep out people."

Chris has also been kicked out of online waifu groups for calling out certain creepy actions.

In response to those whose entire lives revolve around a fictional character, Chris describes them as having a "screw missing".

"The thing about this kind of fantasies is that you still need to know what is real life."

While this self-awareness is almost irreconcilable with having a piece of shapely plastic for a companion, Chris compares Saber to a chou chou (an item owned by a child, usually a pillow, plushie, or blanket, that provides comfort and security).

In a random, obscure way, it is perhaps edifying to know that it is not pure horniness that keeps the relationship going.

And for the record, it was not pure horniness that started the relationship either.

Chris took Saber on as his waifu when he was 19 and undergoing National Service (NS).

At that time, having waifus was a burgeoning trend, and a well-known member in the community had begun taking his figurines out for photo shoots.

The main reason, however, was the stressful environment in NS, and the resultant loneliness.

"There was a lot of stress, so I was feeling a bit lonely, I couldn't really cope, so I was looking for a companion."

Chris also mentions that the whole thing started out of frustration, as a joke.

One might even go so far as to call it a coping mechanism.

I had to force the question out of me.

"So... do you anything sexual with your dolls?"

There is a tiny pause before Chris answers.

"The straight answer is no. Because the hardware is not compatible. Even if I want to, it's not possible."

"But there are sexual photos of her online. I'll leave that to your imagination... No need to elaborate there lah." 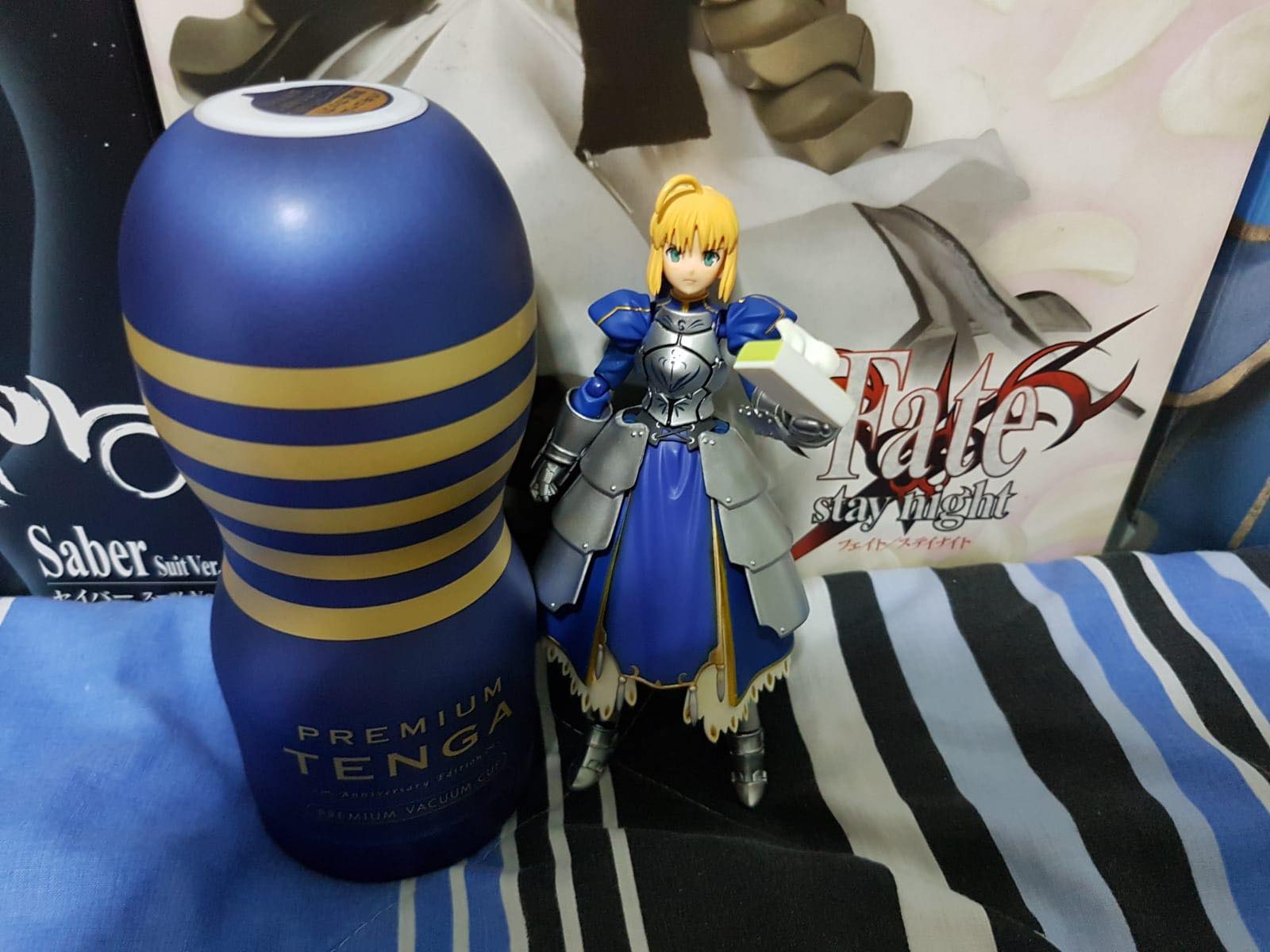 Other times, Chris takes "sexy" photos of Saber, which he shares on Facebook.

Below is a figurine of Saber dressed in nothing but a ribbon: 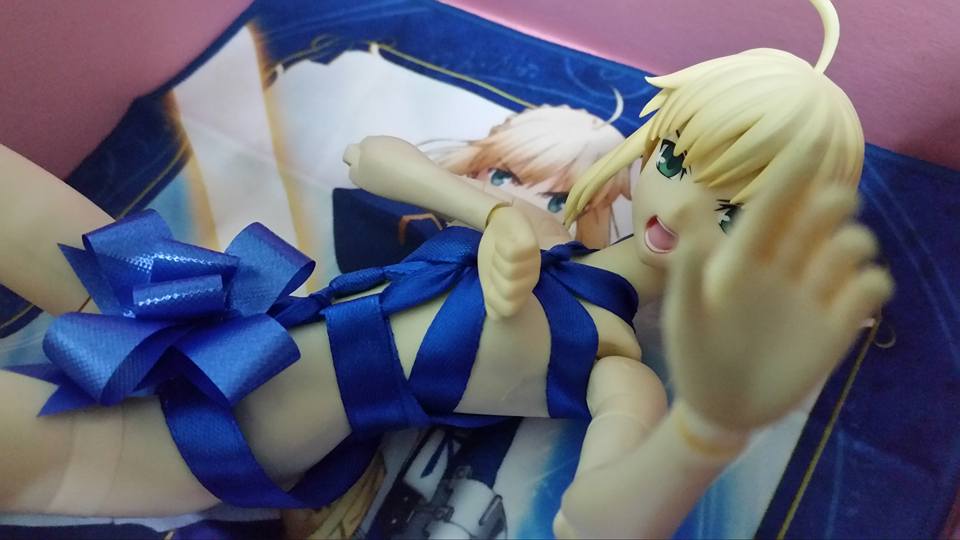 Will Chris then be attracted to females who are cosplaying as Saber?

He believes yes, on a subconscious level.

Lurid details aside, one can classify this as a long-term relationship.

While some guys have seasonal waifus, Chris has been devoted to Saber for the past eight years.

In the meantime, he has not been in a serious human relationship, although he has dated a few girls.

"It just didn't work out lor," was his prudent answer to my busybody questions.

But when asked what he would do if he had a real-life girlfriend who disapproved of Saber, Chris mimes throwing the figurine over his shoulder.

On a serious note, though, Chris believes that the solution would be to sit down and talk things out.

Since that has yet to become a reality, Chris takes Saber out on Valentine's Day and special occasions instead.

Past activities include going for a meal, to the movies, a picnic, kite-flying, and even chocolate-making.

Photos of the day are then uploaded as a Facebook album to commemorate each year.

Here are some of the uploads:

His motivation for planning the dates is simple:

"I know guys la, they cannot get a girlfriend then very emo. So it start off like aiya, if like that I might as well bring her [Saber] out to V-days lor."

Mid-Autumn Festival is another cause for celebration (so to speak): 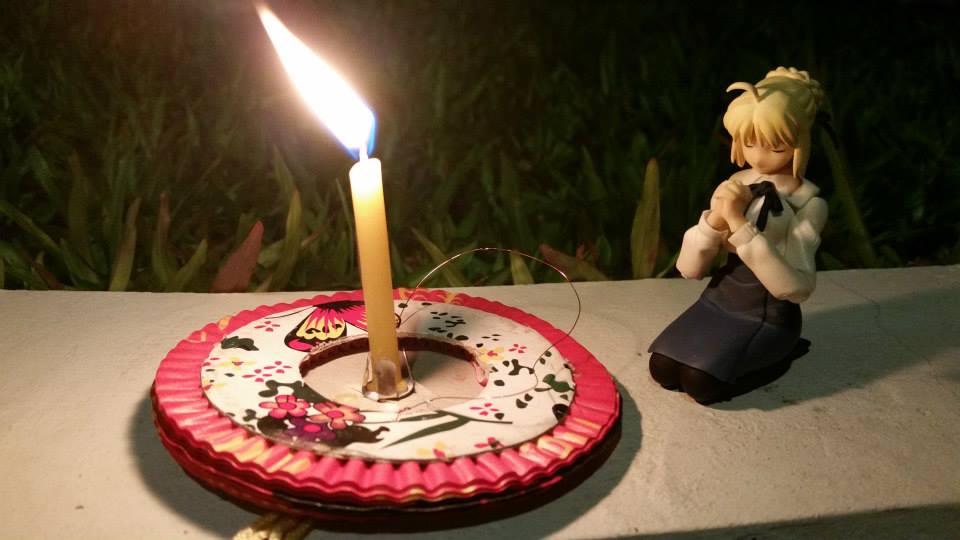 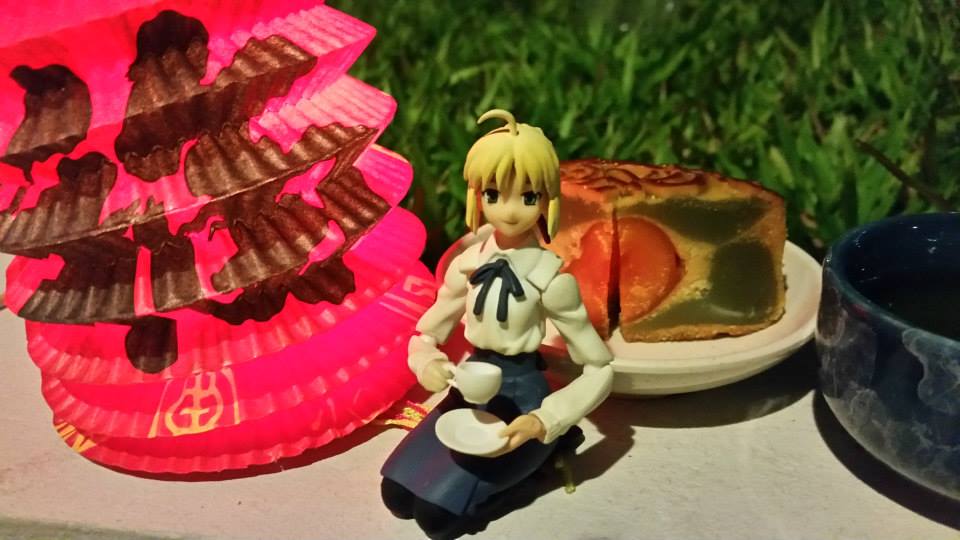 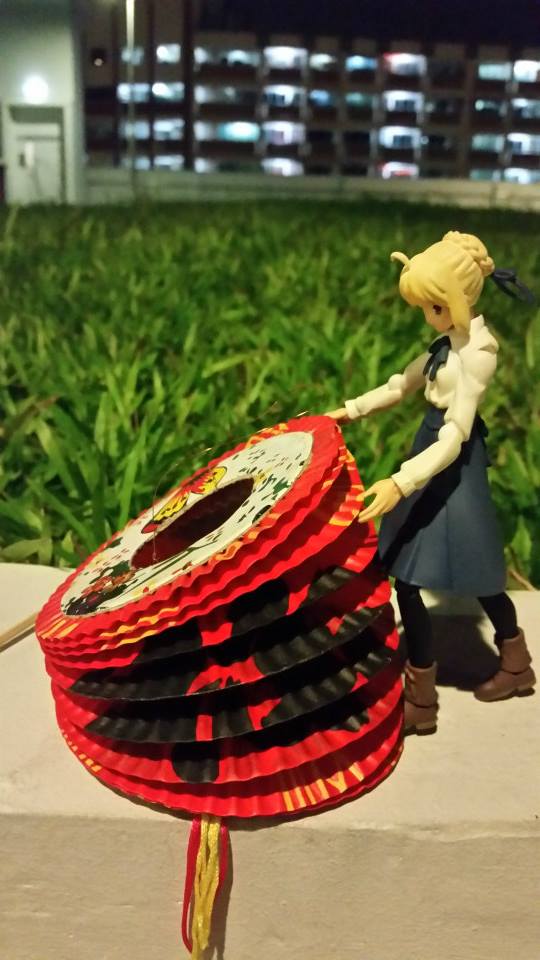 Besides taking her out, Chris also buys her gifts like dresses and miniature replicas of accessories, including an "iPhone" (which was around S$2).

An official dress (i.e. an actual design worn by the character, and presumably licensed) costs S$250 or S$500, while unofficial outfits are about S$20 each.

Chris has about five or six official outfits.

A tailor-made dress, on the other hand, is around S$50.

Choosing to take on Saber as his waifu has ostensibly set Chris on a different path from most people.

But it has not been half bad.

For Chris, it has become part of his identity. So much so that other enthusiasts in the community recognise him as the "husband" of Saber -- even those who have not met him.

Despite his self-consciousness about having a waifu -- a symptom that persists till today -- Chris finds that he makes friends more easily through her.

As it is, a friend once offered him a free table at the club on the condition that he brings Saber along. 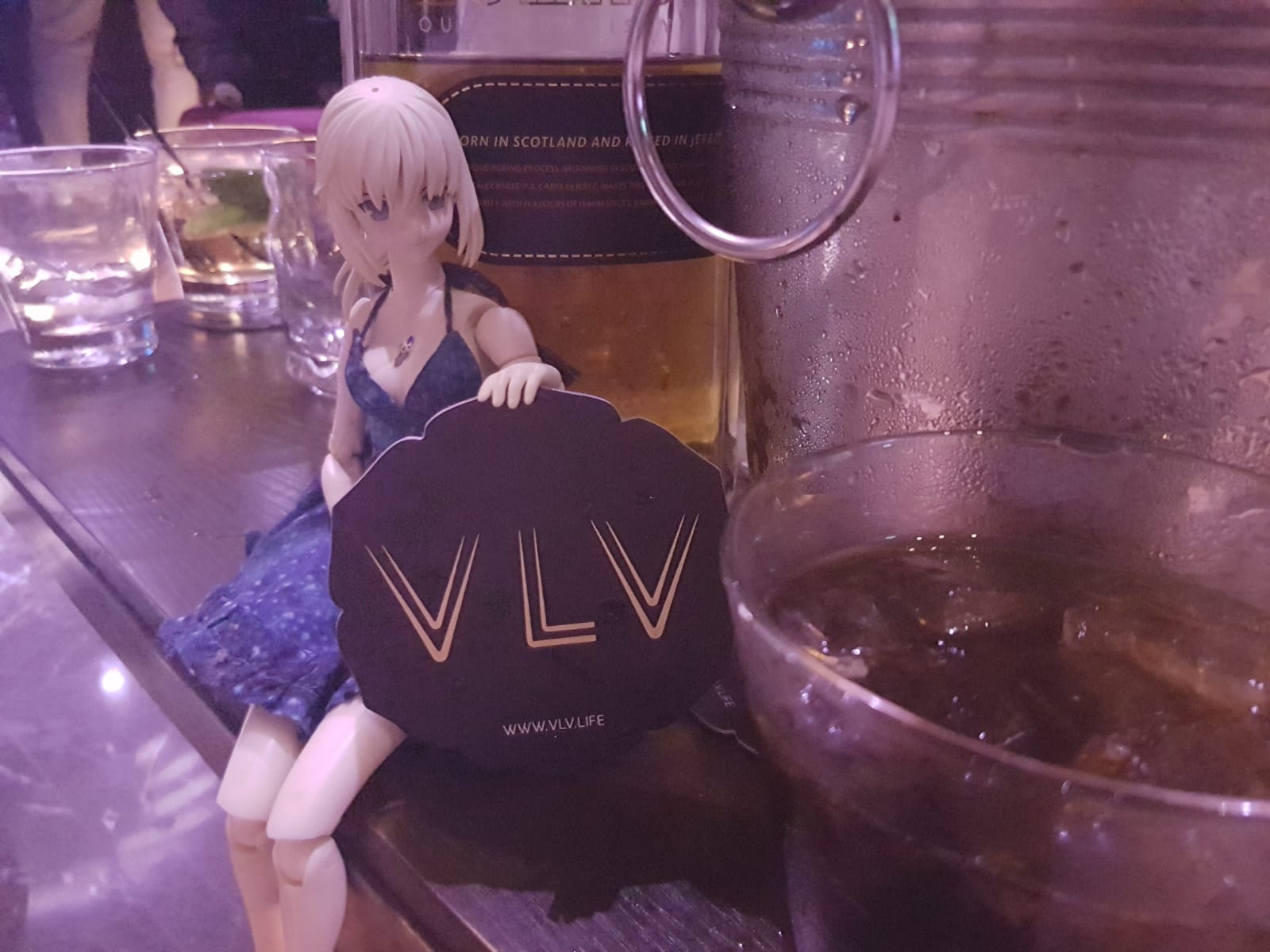 Parents, however, are a whole other ball game.

Chris' mother had learned of his companion when she came across his figurines and dolls.

Thankfully for him, she is not fiercely against the idea of sexualised plastic lying around, although it is not clear if she knows of their relationship.

"At least I know you're not gay," she had apparently quipped.

And Chris' mother was right on that count.

"The idea was that you know, just treat her [Saber] like a real girlfriend, then she gives me practice," he jokes.

*Not his real name

All images courtesy of Chris

Here's how you fake being artsy to impress your date/boss/future mother in law.

Read this and cry in a corner.

Kids teach us the darndest things. But it makes sense.

Wanna run away from your responsibilities?!