Students in 2018 are no longer meek or inclined to run away at the sight of the discipline master like students of yesteryear.

A group of Deyi Secondary students have taken matters into their own hands by contacting the media about something they perceived to be an act of gross injustice.

On Nov. 1, 2018, an email sender who identified himself or herself as the admin of the Deyi Secondary School's meme page (@thedeyiansdigest) got in touch with Mothership about an "issue" between the school's principal and the tuck shop's drink stall owner.

The latter, known as Madam Yap to students, was allegedly fired without warning.

The reason? For supposedly providing disposable cups to a group of students for takeaway.

Here's a summary of the email:

The student ended the email with a plea for Mothership to "spread awareness" of this issue:

"This issue and mistreatment of our beloved drink stall aunty has made many Deyians furious and this is most definitely the most popular topic in my school.

Therefore, on behalf of my school, I would sincerely hope that you would help us spread awareness of this issue."

In the same email, the student mentioned that an Instagram account (@deyidrinkstall) has been created in dedication of the drink stall owner.

One of the posts mentioned that Yap was "not given a chance to continue with her contract": 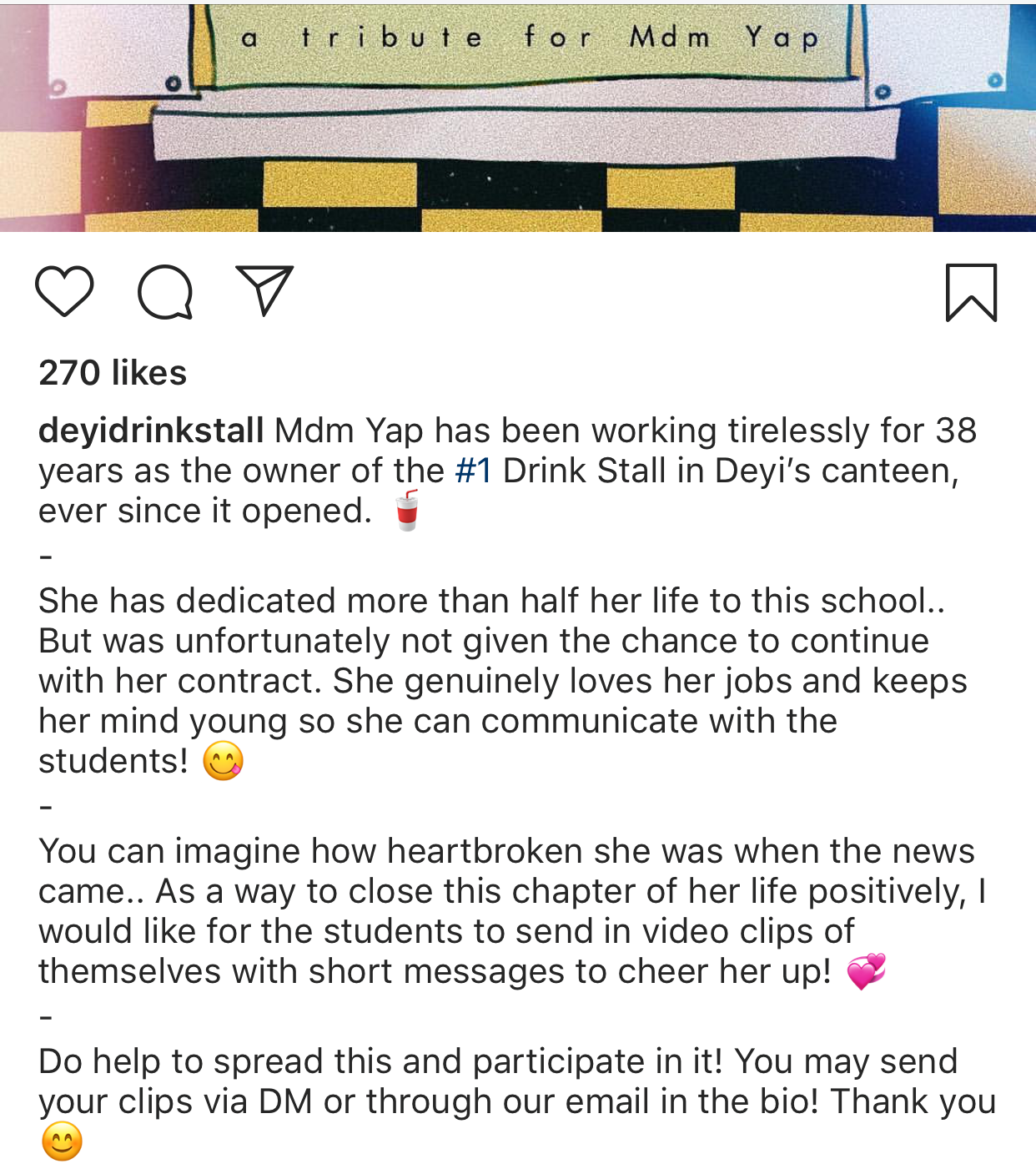 Another post revealed that Yap has until Nov. 15 to vacate the stall, and is clearing her drinks in the meantime: 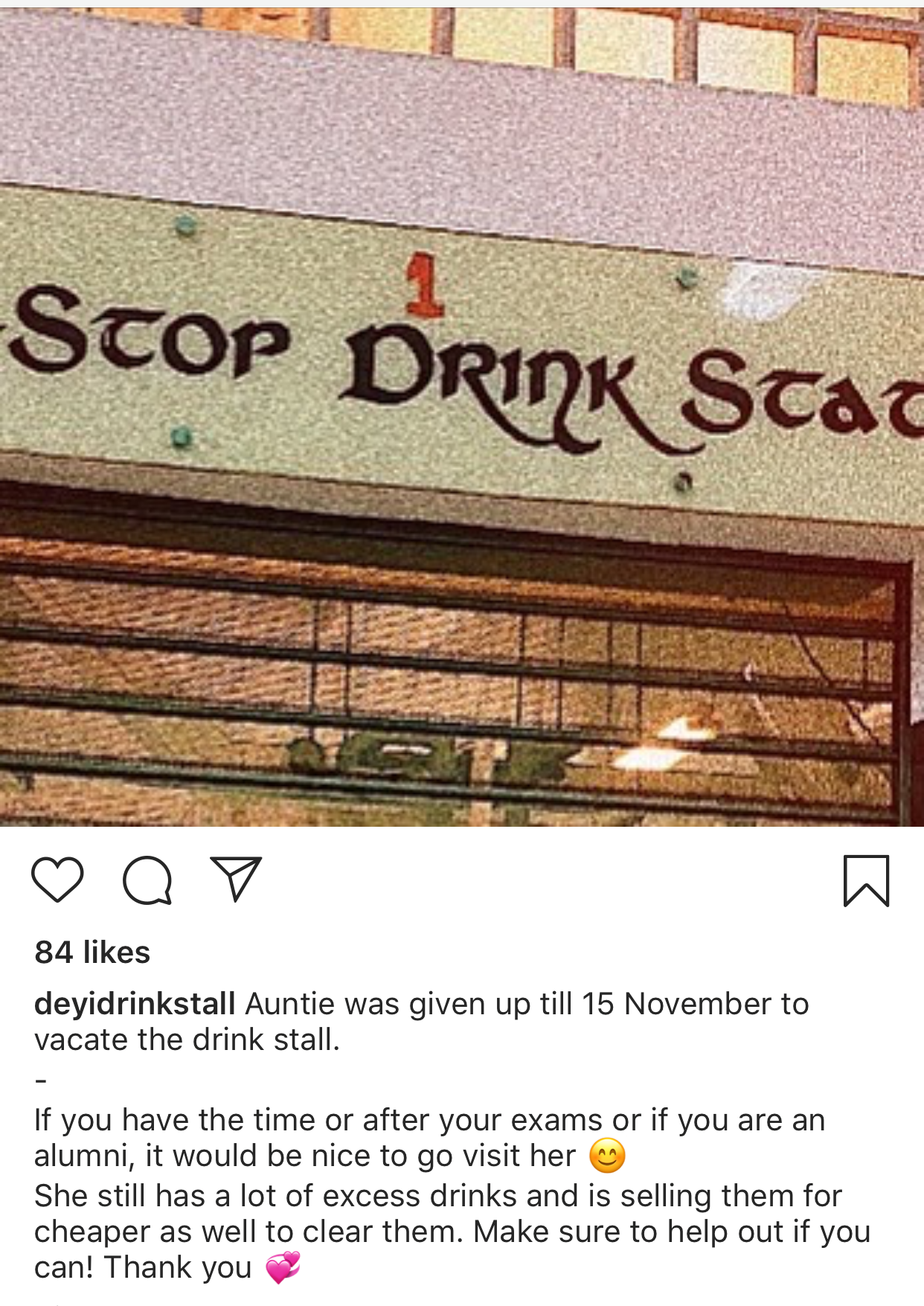 However, the student who provided the tip-off did not reply to further queries over both email and Instagram about what happened.

In response to Mothership queries, the principal of De Yi Secondary issued a statement to clarify matters.

While Lim clarified that Yap's contract was indeed not renewed for 2019, the principal added it was due to how the drink stall owner "did not maintain proper hygiene practices for her stall".

Yap was allegedly reminded of her hygiene practices in February, May, and August 2018, but no improvements have been made, according to the school's statement.

Additionally, the school had reportedly made several requests throughout the year for Yap to sell healthier items (e.g. cut fruits, fruit juice), but Yap allegedly did not comply.

This is the statement in full:

"This is an unfortunate episode.

The school’s canteen committee regularly briefs all stall owners on the importance of providing healthier food and maintaining strict stall hygiene, for the sake of the students’ health and wellbeing. The school conducts periodic reviews to ensure that our stall holders abide by this.

The school informed Mdm Yap in February and May this year that she did not maintain proper hygiene practices for her stall (e.g. cardboard boxes stored behind her stall frequently attracted pests). Despite this, her stall hygiene did not improve, which led to a further reminder in August 2018.

The school also made several requests to Mdm Yap throughout the year to include the sale of cut fruits, fresh fruit juice and other healthier food items to encourage healthier eating habits among students. However, Mdm Yap continued selling only canned and packet drinks.

As a result of these incidents, the school had to make the difficult decision not to renew Mdm Yap’s contract for 2019. The use of disposable cups was never an issue, since Mdm Yap had already switched to reusable cups in 2017."

??
Looking for a cultured and sophisticated way to spend your weekend?

??
Since you probably don't talk to your bus drivers, better read what they want you to know.

?⏳
If you shop on Carousell, save time; save money with this new service.