You might recall the term "PISA" for that test our 15-year-olds take in math and science.

And of course, us being who we are, came up tops in the 2015 PISA rankings:

But anyway, the PISA is conducted by the international Organisation for Economic Co-operation and Development (OECD), which analysed the 2015 PISA results and generated a report that examined education equity across these 72 countries and economies.

This report, which highlights education systems with a lack of equity, was released on Tuesday, Oct. 23, and is certainly timely considering the recent national conversation on class divide in schools.

It also refers to "disadvantaged students", which it defines as "those whose values on the PISA index of economic, social and cultural status are among the bottom 25 per cent within their country or economy".

Stay with us, this may get a bit heavy —

Here are the key findings you need to know about disadvantaged students in Singapore:

Aside from data on disadvantaged students, the PISA report specifically highlighted Singapore as the only country (among those who submit data) where attainment of tertiary education (degree or diploma) "improved markedly over time", improving by 19 percentage points (And yep, this is a pretty great thing too): 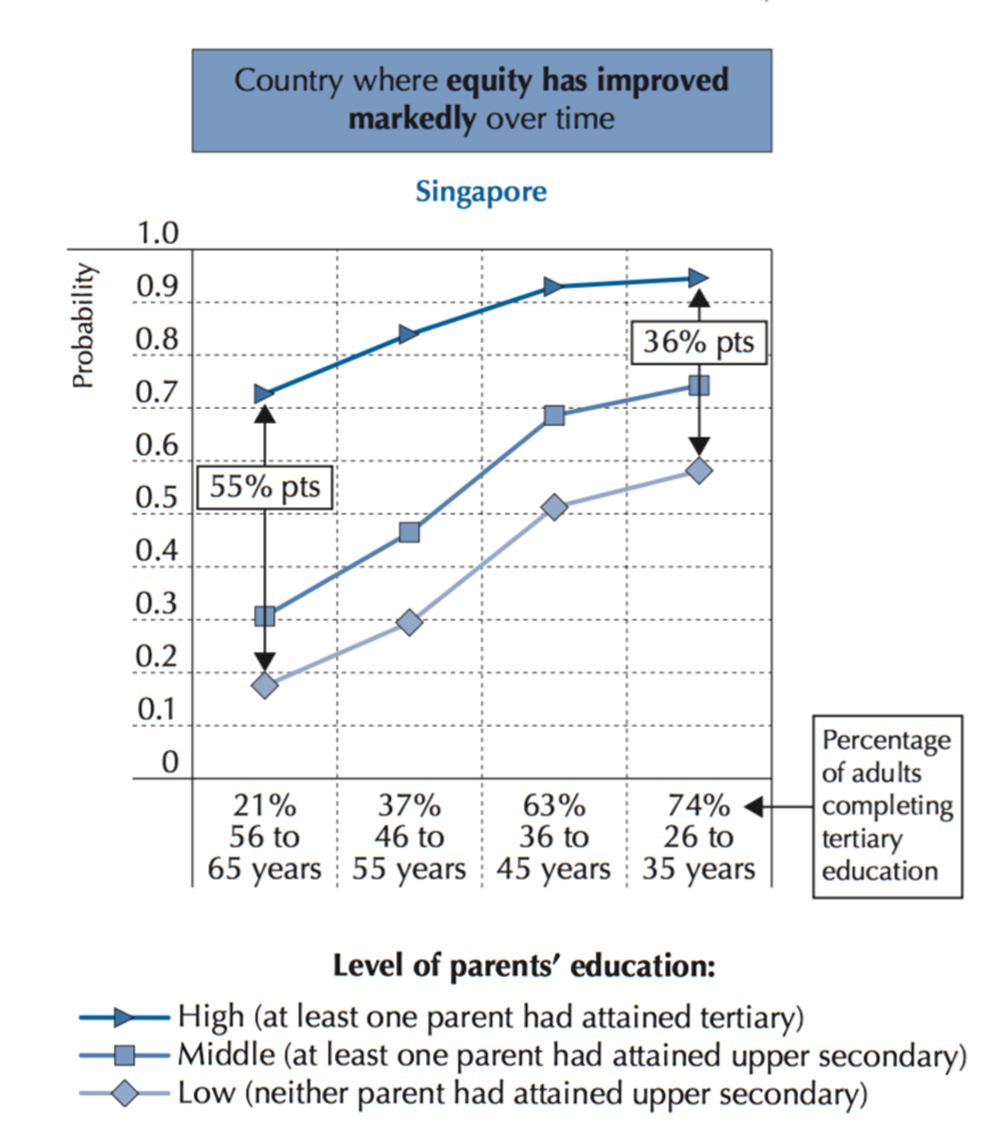 Here's what the report says:

"In Singapore, the difference in the likelihood of completing tertiary education related to parents’ education narrowed by 19 percentage points between the oldest and youngest cohorts. What is unique about Singapore are the enormous strides made by adults with low-educated parents.

Arguably, this was possible because the stratum of socio-economically advantaged adults had already reached a “saturation” point in their access to tertiary education by the 1980s, when 86% of adults with tertiary-educated parents also completed tertiary education."

MOE's take: lift the bottom, instead of capping the top

One of the "not so good" findings from the report is that disadvantaged students in Singapore have low national resilience.

In other words, there's a very big gap in terms of performance between high- and low-SES students.

But again, disadvantaged students in Singapore have a higher probability of outperforming their international counterparts (high core-skills resilience and high international resilience).

In a July parliamentary speech, Education Minister Ong Ye Kung said some suggestions to close this gap included banning tuition centres or limiting the resources given to popular schools.

He said, however, that his ministry’s approach is to lift the bottom by allocating them more resources instead of capping the top.

Some examples of lifting the bottom include:

The effect of lifting these groups gives them access to more opportunities that were once open to those who could afford them. It also gives them the opportunity to interact with students of diverse backgrounds.

The report concluded that "no country in the world...can yet claim to have entirely eliminated socio-economic inequalities in education".

More background on the PISA test scores and how we did: