The last time I volunteered, it was more than five years ago, when I was still in school.

Besides, I never understood how volunteers found the time to do what they do. They don't even get paid, so why bother?

Fast forward to present day, I was asked to volunteer by my colleagues, in the spirit of National Day and also so that I could write this article.

Since I got to choose the beneficiary I wanted to work with, I decided to go with the Bake and Sing with the Me Too! Club, a programme by the Movement for the Intellectually Disabled of Singapore (MINDS).

The programme aims to enhance the social integration of people with intellectual disabilities (PWIDs) through leisure and befriending activities.

Not knowing anyone around me, I felt obligated to break the ice first since, you know, I was the volunteer. And as someone who isn't much fun at parties, I dreaded that very idea.

However, I was pleasantly surprised when Kayne and Joanna, two of the beneficiaries, reached out to me first with a bombardment of questions.

"Hi! What's your name? Where are you from? What are we doing today? You have nice hair, where did you cut it?"

In fact, it felt as if they were the ones helping me to build my social integration skills and not the other way around.

Many cooks don’t spoil the broth

After close to 10 minutes and several answered questions later, we went on with the first activity of the day: baking chocolate cupcakes.

It brought me back to the home economics lessons I had many, many years ago when I would pass over the duties to my classmates and make them do everything.

But this time, it was a refreshing sight to see everyone pitching in to do their part to make the cupcakes, from mixing the ingredients to the washing of utensils. 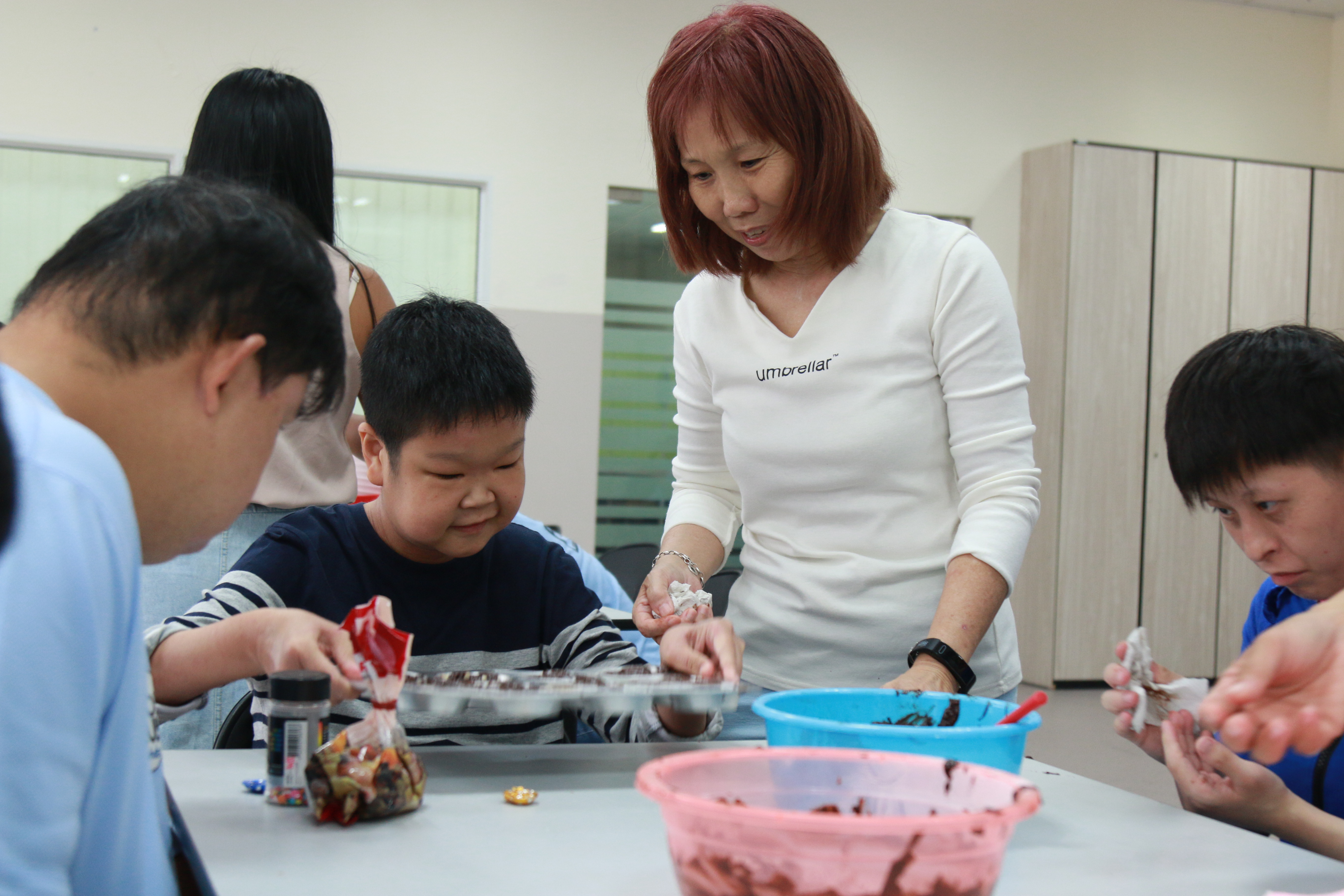 In fact, a few of the more skilful beneficiaries like Jason (below) stepped up by guiding their less-experienced counterparts. Insisted on giving me a cupcake

In between the stirring of the cake batter, the beneficiaries decided that they wanted to get to know me better. Thus ensued another round of questions.

"Fasiha, do you have a boyfriend? What is your favourite colour? What's your name again?"

When they got distracted or too tired from stirring the cake batter, I had to encourage them to try again and stirred it together with them.

I have to admit that at some point, I just wanted to take the bowl and stir it for them because I thought they were either taking too long or were just ignoring me completely.

But their efforts and my endless nagging paid off eventually because they ended up with this batch of cupcakes: While the cupcakes were prioritised for the beneficiaries, one of them actually insisted that I take one.

And whoever said that too many cooks spoil the broth must have cooked with the wrong group of chefs because the cupcakes made by them tasted pretty good. 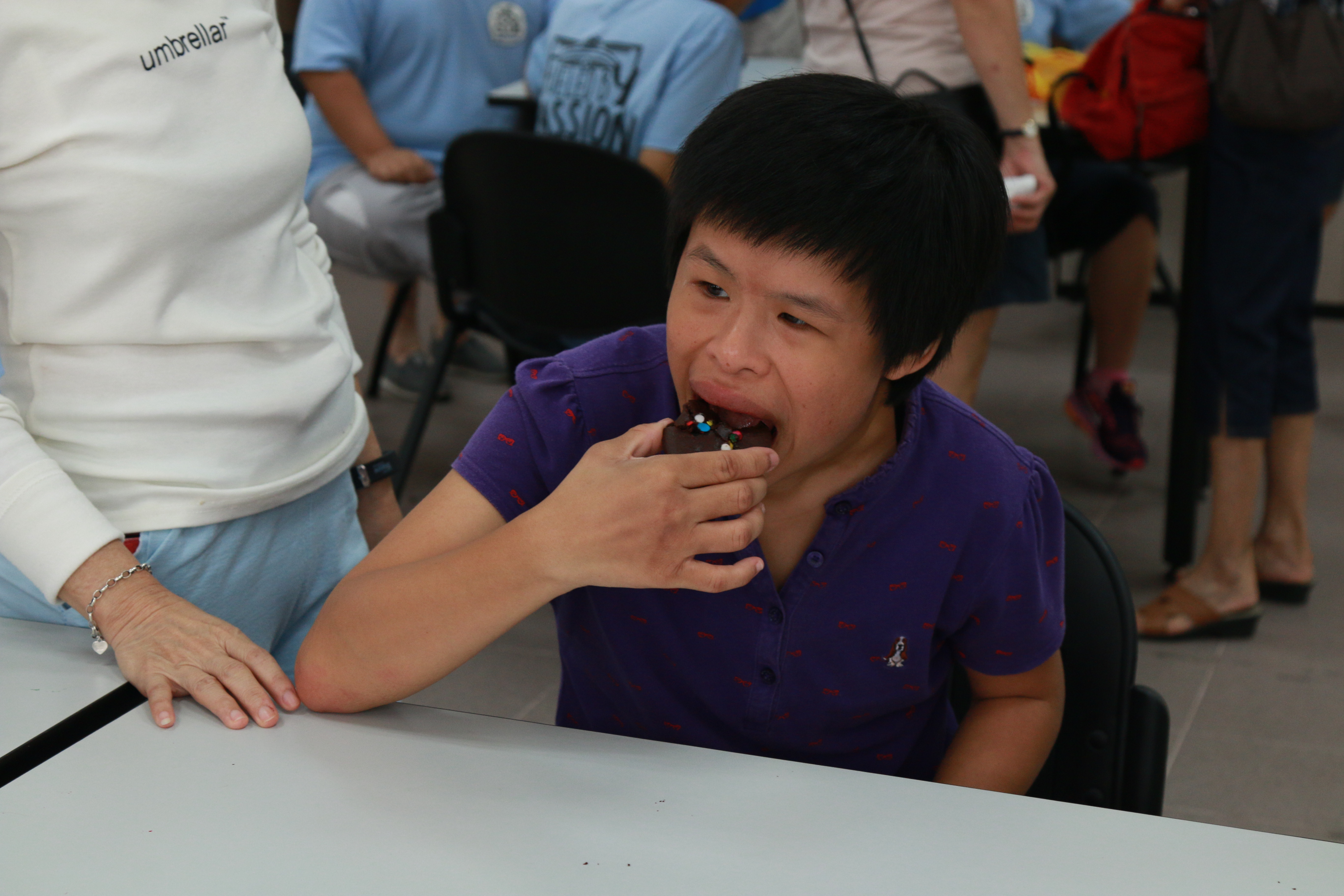 The second half of the day's activity was something a lot of them looked forward to -- the karaoke session.

The first song that they sang to was Emil Chau's Friends and it was very aptly of the Me Too! Club because despite coming from different backgrounds, the beneficiaries and volunteers managed to forge friendships with one another. 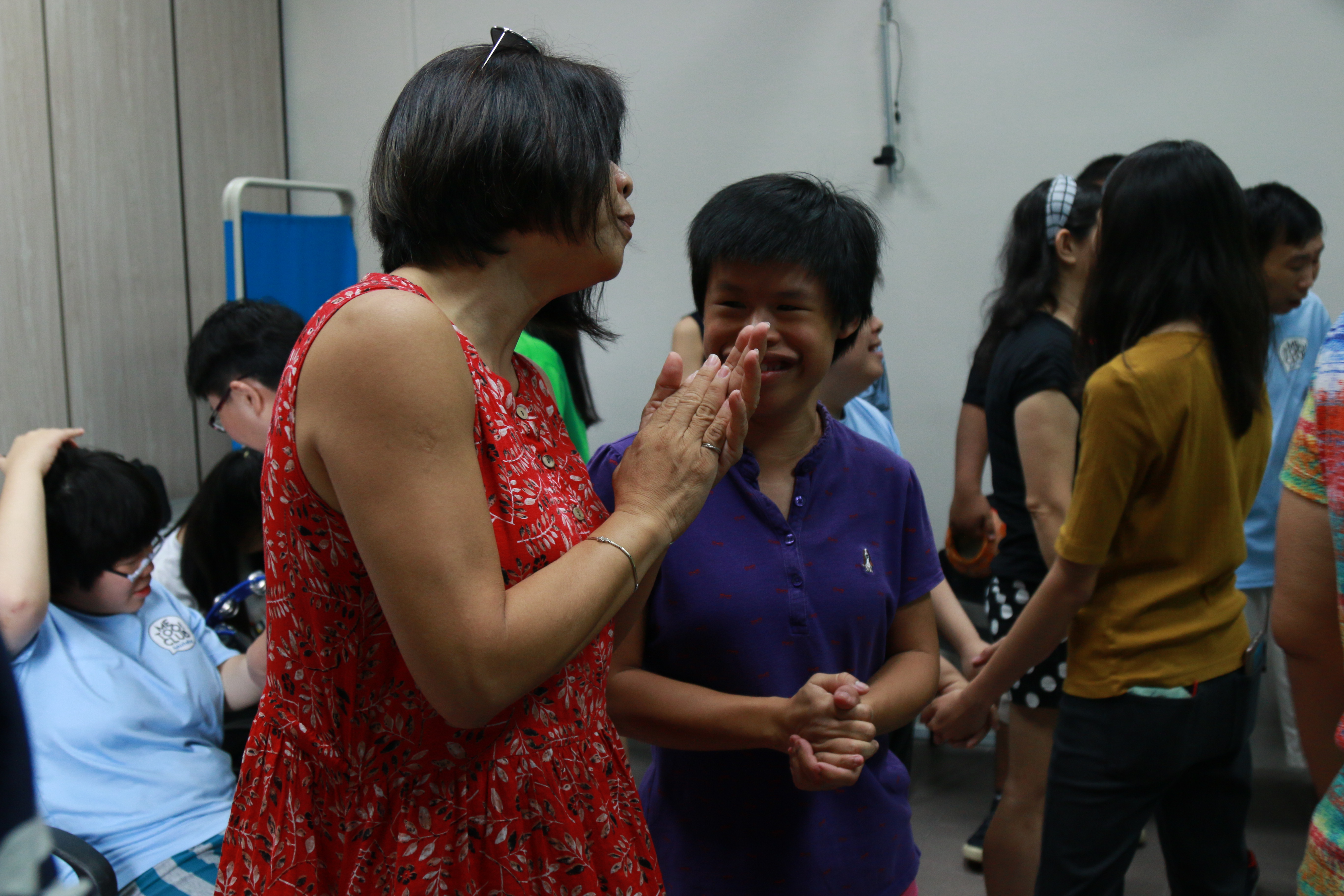 Every beneficiary got to sing a song of their choice, from K-pop (EXID's WHOZ THAT GIRL) to classic pop (Fool's Garden's Lemon Tree), and even though not everyone has heard or understood a certain song, they sure did enjoy themselves and danced along to every single song anyway. 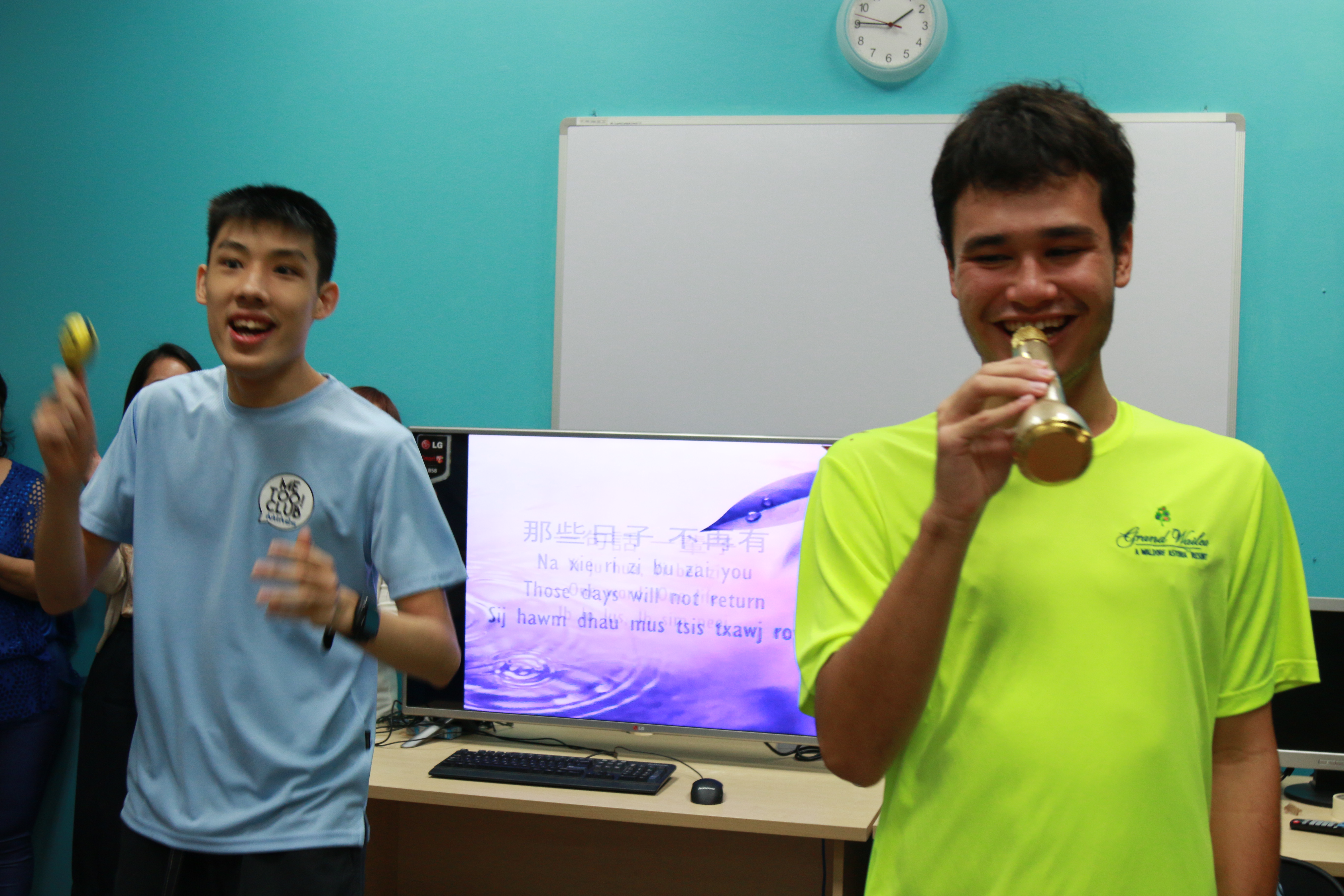 Why volunteers keep coming back

And just like that, my two hours of volunteering came to an end and I had to say goodbye to the beneficiaries.

Before Joanna left for the day, she approached me and asked:

"Are you coming back next week?"

And now I know why the volunteers keep coming back: The warmth and intangible rewards volunteers receive.

One volunteer who has been with the Me Too! Club for three years shared:

"When we first met them, they hardly responded, hardly smiled. Now that they are familiar with us, they greet us and give us high-fives. They really do make us feel warm."

Even a five-year-old can do it

And if you think you need a lot of experience to volunteer, that's where you're wrong. 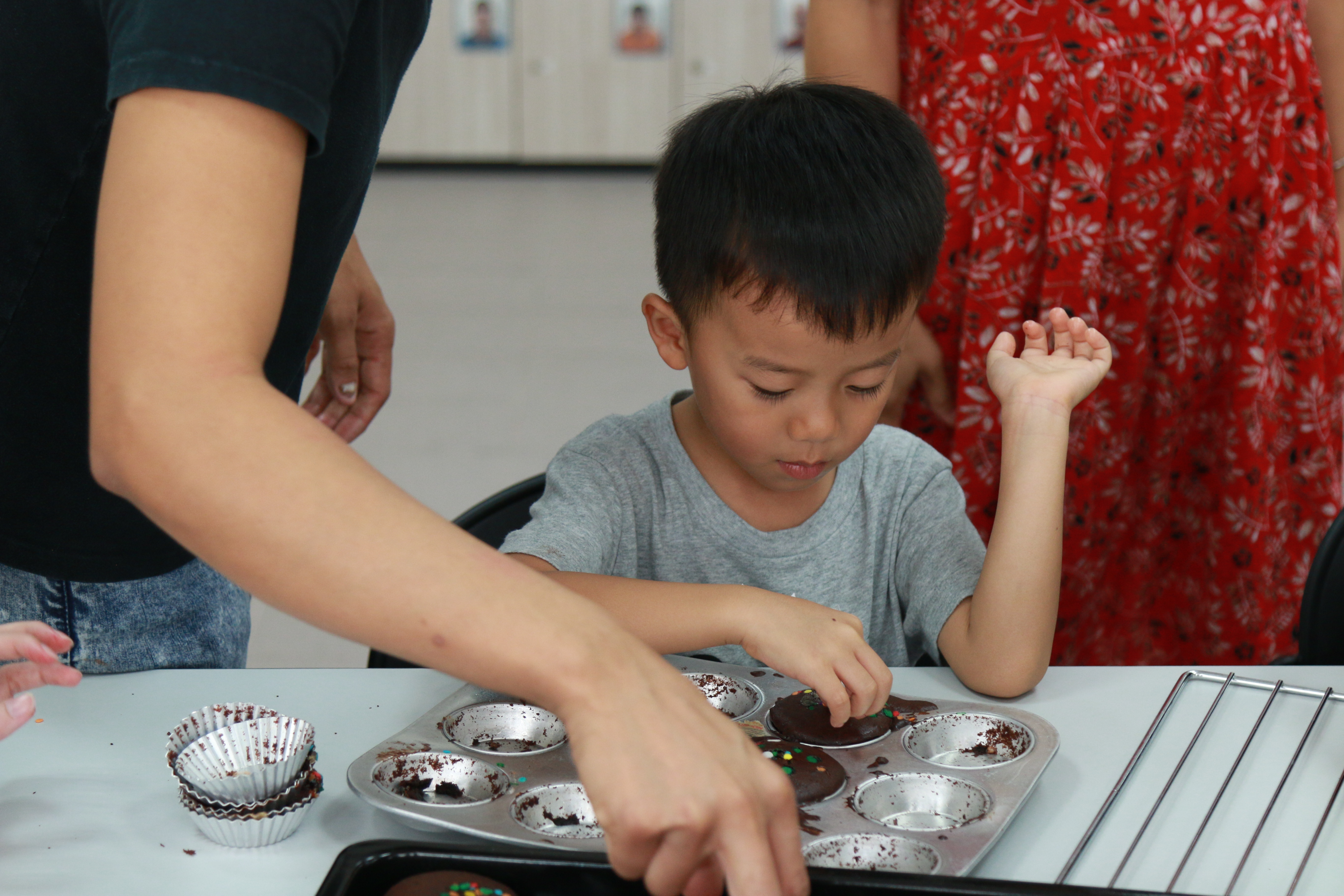 Despite being the youngest in the group, Rayson plays an active role in enhancing the lives of the beneficiaries even if it’s just by interacting with them and helping to remove the cupcakes from the baking tin.

So while you don't earn money from volunteering, you earn a lot more from the relationships forged and the lessons learnt.

But don't just take it from me, you can try it for yourself by signing up to volunteer for various activities or connect to SG Cares on Facebook and Instagram.

All images taken by Fasiha Nazren

This sponsored article by SG Cares has made the writer volunteer more at the office by making rubbish runs.