When we travel, especially on budget airlines, most of us are happy to stow our own luggage in the overhead compartments when we go on a plane.

And most of the time, we only seek the assistance of the cabin crew if we are struggling with our bags, or if the compartment is too full and we can't find nearby space.

However, a well-built and physically-unhindered man was recorded on video insisting that an air stewardess on his flight from Singapore stow his suitcase for him.

Singapore budget airline Scoot confirmed to Mothership that it took place on January 21, 2018, while passengers were boarding flight TR180 from Singapore to Nanjing.

You can watch the video below (description below):

The exchange took place in Mandarin, between the passenger and a Scoot stewardess.

While a good portion of the audio is muffled, the female attendant could be heard at one point saying to the passenger:

"If your hand was injured, I would definitely have helped you."

The passenger is also heard saying to the stewardess later on:

According to the caption accompanying the video on Facebook, the man was holding a cup of water when he asked a stewardess to put his luggage in the overhead compartment for him.

When she declined his request politely, he started to get angry.

When the passenger's attitude started to worsen, the stewardess called her supervisor.

He then allegedly complained to her about the stewardess's attitude, and asked the flight supervisor to help him put his luggage up in the overhead compartment.

The description goes on to report that the supervisor said:

"Mister, you are so well-built, I can assist in holding your water while you put your luggage away."

Upon hearing this, the man allegedly got increasingly riled and attacked their service attitudes.

At the point, the supervisor gave what sounds like a thinly-veiled threat:

"Mister, if you insist on this, I will ask security to do it for you."

It was only at this point that the man stowed his own luggage.

Flight attendants not supposed to help with baggage

You may or may not be aware of this, but flight attendants are not strictly obligated to help passengers with their baggage.

Not only does it pose a health hazard (e.g. injuries from heavy baggage, repetitive lifting of heavy weights), but it also compromises efficiency. This is especially so when we take into account the number of flight attendants compared with the number of passengers on a flight — imagine the time wasted if the flight crew had to help every passenger stow every piece of luggage they had on board a plane.

And we didn't think we'd have to say it, but if you're capable of carrying your luggage to the airport, you can jolly well put it in the overhead compartment yourself, can't you?

Other Facebook users commented on how shameful it is for a big man like him to ask a physically smaller-sized woman to lift his baggage: 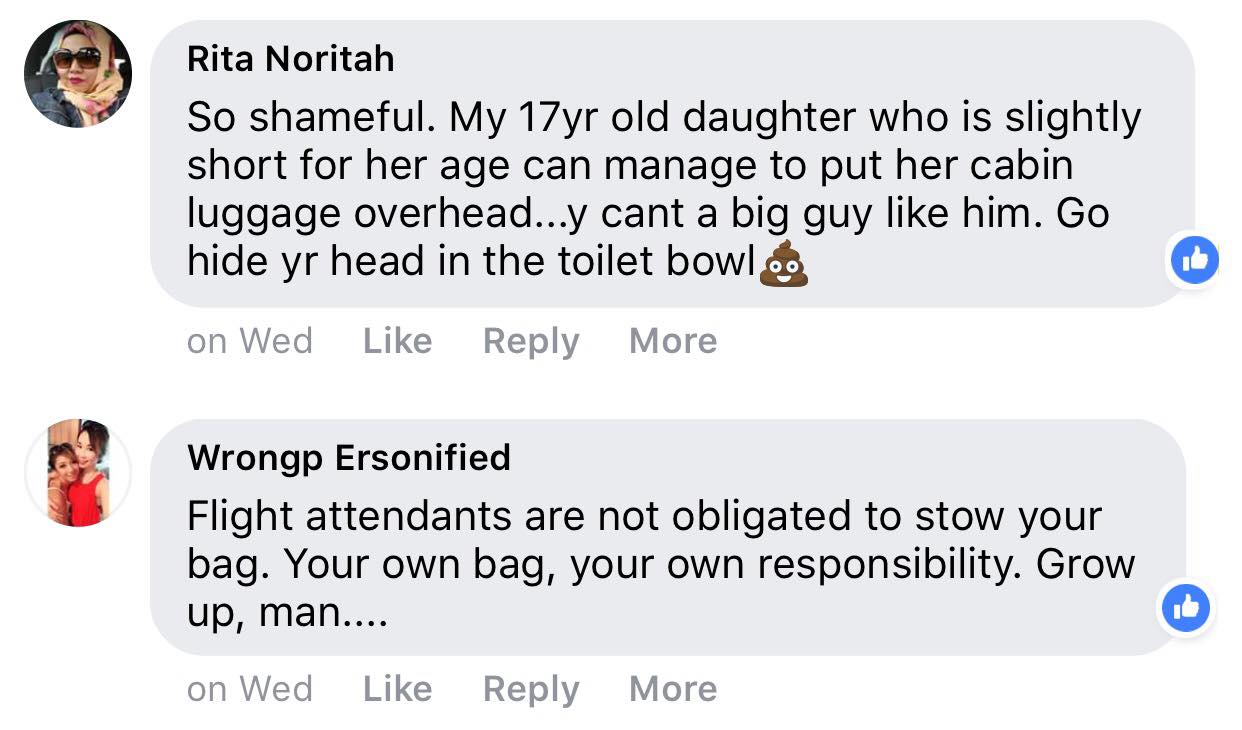 However, stewards/stewardess do assist young children or passengers who have mobility issues.

We have reached out to Scoot to find out what their policy is on helping with passengers' baggage and will update this article if they reply.