It's a longtime rule that's been in place but not always actively enforced in Singapore: In Housing Development Board (HDB) flats, cats are not permitted as pets.

"They are generally difficult to contain within the flat. When allowed to roam indiscriminately, they tend to shed fur and defecate or urinate in public areas, and also make caterwauling sounds, which can inconvenience your neighbours."

However, in practice, this regulation has not stopped many Singaporeans from keeping cats in their HDB homes. Pet cats are mostly left alone insofar as their owners' neighbours do not lodge complaints against them or about their behaviour.

Unfortunately, cat owner Sharikin Bin Ismail's neighbours were not as tolerant of his five cats as he might have hoped.

On January 30, 2018, he received a letter from HDB informing him that all his five cats will have to be re-homed by Feb. 14.

This is the letter from HDB, which he posted on Facebook with the caption: "Need help ... What can i do 2 save my beloved furries.... All 5 r rescued cats... They r apart of our family... My kiddos love them... Pls advice..." 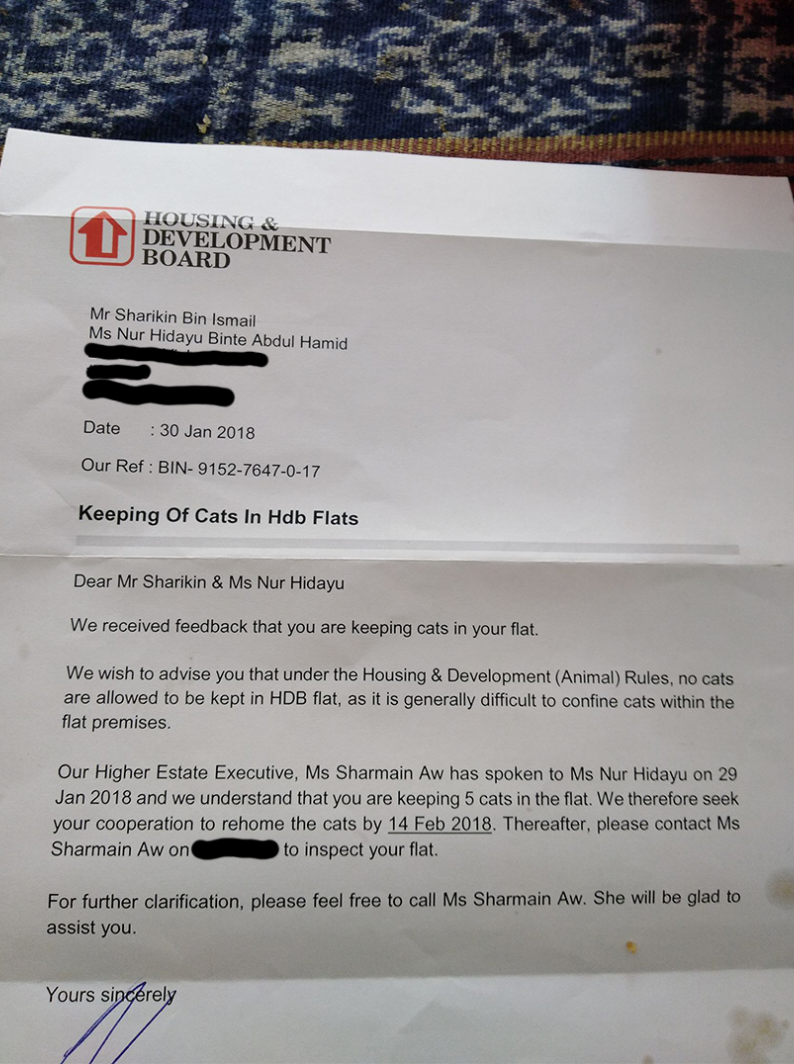 Sharikin believes it is likely that his neighbours lodged a complaint to HDB against him. In comments to his post, he said he tried to speak to and resolve the issue with his neighbour, but was unsuccessful:

In a separate comment, he also claimed that same neighbour had also complained about one of his other neighbours, who had dogs and parrots:

What can be done?

One option Sharikin has is, of course, to re-home all of his cats.

However, it is worth noting that there are no details available about how Sharikin and his family kept his cats, and whether he ensured they did not bother his neighbours through their behaviour and noise made.

And indeed, many Facebook users commenting on his post pointed out that it is important for him to be a responsible pet owner and ensure that his cats were not being a nuisance to the neighbours.

Suggestions tabled included making sure that the cats are contained within the house, and that the area outside — should they roam beyond the confines of his flat — was kept clean:

According to them, cat owners should sterilise their cats, exercise good hygiene and install meshing on home gates and windows. 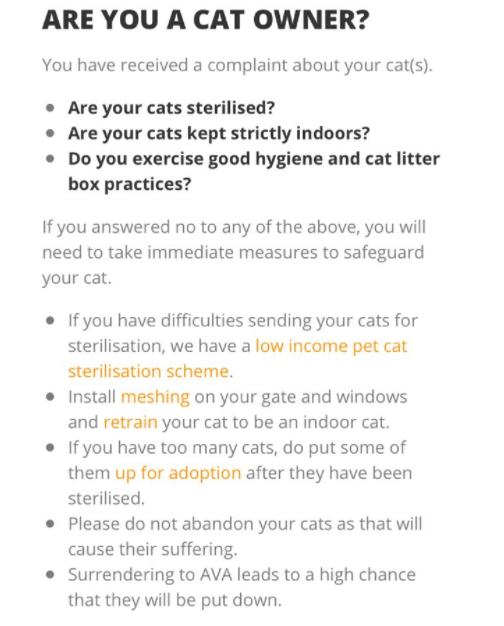 CWS also added that upon adhering to these measures, one can "seek [their] MP's assistance on the grounds that the complaint is baseless and unjust" — provided it really is, of course. They can also contact CWS to discuss their options. 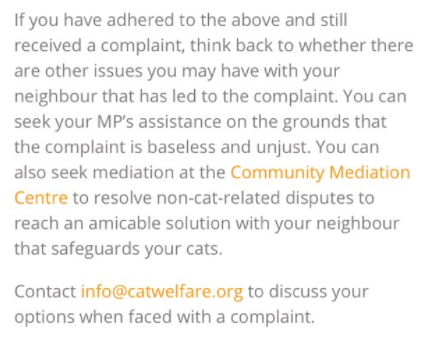 Given all these suggestions, the fate of Sharikin's cats remains to be seen as the Feb. 14 deadline draws nearer.

Here's another cat owner who kena complained in the past:

And here's a reasoned response to a reasoned forum letter on the HDB cat ban: