The Jubilee Walk was launched in 2015 to commemorate the 50th anniversary of Singapore’s independence.

Spanning a jaw-dropping 24 landmarks, the Jubilee Walk brings you through Singapore’s history from ancient Temasek all the way to independence and beyond - that’s 700 years of history packed into an 8km trail. Talk about being ambitious.

Admittedly, visiting 24 landmarks on foot can be a little daunting so we tried something more leisurely - cycling!

We picked out 6 spots on the Jubilee Walk located within cycling distance in the Civic District so that we can get a good feel of the trail without getting heatstroke.

Pro tip: Bring your own bike, or find one of those bike sharing hotspots at the nearby Dhoby Ghaut or Bras Basah MRT stations and you’re on your way.

Even better, take on this trail on a Car-Free Sunday - from 8 in the morning to 12 noon - and you’ll find that there are no cars to compete with you for road space in the Civic District. Shiok right? We also say.

Here’s our handy guide to cycling through the Jubilee Walk:

Start off your cycling trip with a visit to the National Museum of Singapore. This building used to house the Raffles Museum and Library before it became solely devoted to showcasing Singapore’s history and culture after independence.

Fun fact: The famous rotunda that greets you as you enter the National Museum is decorated with 50 stained glass panels - to mark the Golden Jubilee of Queen Victoria’s reign in 1887, the same year the National Museum (then named The Raffles Library and Museum) opened on Stamford Road.

While you’re at the Singapore History Gallery, check out the 14th century gold jewellery (excavated from Fort Canning Hill) and a lead statue of a headless horseman (found at Empress Place).

After that, hop over to the newly opened Glass Rotunda where a special immersive exhibition inspired by William Farquhar’s natural history drawings is currently on display. There, you’ll find this beautiful Patek Philippe Geneve Dome Clock - created by Patek Philippe to commemorate Singapore’s 50th anniversary in 2015.

After you’re done with the National Museum, cycle up Fort Canning Road to our next destination - the seat of ancient Singapura royalty.

Before Fort Canning Hill got its name, it was known as Bukit Larangan - the Forbidden Hill. The hill was the purported place where the ancient Kings of Singapura lived and were buried, hence many people regarded the hill as sacred/haunted.

In fact, the last king of Singapura, Iskandar Shah, is rumoured to be buried in this keramat (shrine) located on Fort Canning. It is unclear if his body is entombed inside - since no one wants to open it.

According to colonial documents, Bukit Larangan used to be surrounded by a wall. John Crawfurd, Singapore’s second Resident, dubbed it the Old Lines of Singapore in 1822. It was thought that the wall was constructed as a defensive barrier for the inhabitants on the hill. 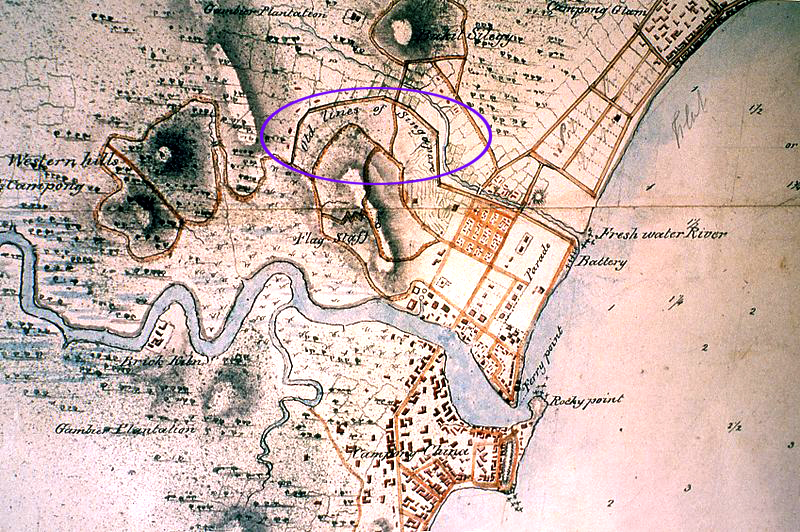 Today this map below located at the foot of Fort Canning Hill shows you where this wall used to run - along Stamford Road.

Aside from ancient kings, Fort Canning was home to 2 Christian cemeteries. Only structures from the one on the Fort Canning slope remain today - the brick wall and two Gothic gates which used to enclose the cemetery.

From Fort Canning Hill, cycle down Canning Rise until you reach Hill Street. Continue down onto Coleman Street until you reach the Padang and make a right turn where you’ll find Singapore’s very own Southeast Asian Art Gallery - the National Gallery.

As you take in the National Gallery, take a moment to think about how much drama had occurred on these very steps of the previous City Hall.

These steps had been the stage for many pivotal moments in Singapore’s history. Such as the surrender of the Japanese to the British leading to the end of the Japanese Occupation:

The beginning of Merger with Malaysia in 1963:

And finally, our first National Day parade as an independent country:

Today, the National Gallery houses a plethora of Southeast Asian art, including one of our favourite works - the hyperrealistic Forest Fire by Indonesian artist Raden Saleh.

Once you’ve had your fill of art, continue along St Andrew’s Road onto Connaught Drive. Cross Anderson Bridge and you’ll arrive at our next destination - the Fullerton Building.

As we embarked on the journey towards self governance, and ultimately, independence, Fullerton Square was a popular spot for political rallies as its central location in the Business District offered political parties access to the working crowd during lunch times.

Since 1959, political parties such as the People’s Action Party (PAP), Singapore’s People’s Alliance (SPA), and the Workers’ Party (WP) have given some of their most stirring speeches to garner votes from the people.

No prizes for guessing the inspiration for the naming of the Jubilee Bridge. Opened in 2015, the bridge actually runs more or less parallel to the Esplanade Bridge. Why the need for an extra bridge?

According to then Minister for National Development, Khaw Boon Wan, the bridge was proposed by the late Minister Mentor Lee Kuan Yew in 2004, when he noticed that the Esplanade Bridge’s walkway was too narrow for pedestrians to stop and fully admire the Marina Bay waterfront.

After the earlier sights along the Jubilee Walk, the modernity of the landscape seen from the Jubilee Bridge is a huge contrast. Here, you’ll find the glittering buildings of the Marina Bay Financial Centre and the Central Business District - a far cry from the landscape of a fledgling nation of 1965.

From the Jubilee Bridge, cycle down past One Fullerton and towards the Promontory. Circle round the Marina Bay waterfront, past Marina Bay Sands, turn into Gardens By The Bay and make your way straight to the Marina Barrage, our last stop on this cycling trail.

The Marina Barrage is often touted as a technological marvel that illustrates how Singapore continuously strives for water independence.

The Marina Barrage is actually Singapore’s 15th reservoir, constructed to increase our water catchment area and help prevent flooding in low-lying areas in the city such as Chinatown, Geylang, and Jalan Besar.

That’s not all that the Marina Barrage does though. The ever constantly maintained water level in the barrage allows the bay to be used for water sports. The area on top of the barrage also allows for concerts and kite-flying.

Interested in the Jubilee Walk? Check out the Roots.sg trail here and their video below:

This sponsored post helps our writers buy their own bicycles so they can also zip around town see heritage.